The heavy element strontium is created in the violent collision of a pair of neutron stars, according to a new study. It’s the first time scientists have detected the birth of a heavy element found on Earth elsewhere in the universe.

Over a period of hundreds of millions of years, binary pairs of neutron stars edge together in a spiraling dance before they eventually merge. But this is not a happy union.

The two stars tear each other apart, spinning elongated tails made up of different chemical elements out into the wider universe.

In 2017, scientists detected gravitational waves moving past the Earth as a result of the merger of a neutron star pair known as GW170817. By observing the leftovers of this stellar explosion across a range of wavelengths, the team detected the creation strontium. The findings were published recently in the journal Nature.

Darach Watson, Ph.D., associate professor at the Niels Bohr Institute at the University of Copenhagen and first author of the new study, said the results confirmed the team’s initial suspicions.

“We believed back in 2017 that we had this big radioactive explosion, what we were seeing was probably the production of these heavy elements,” Watson says. “And that’s what we’ve been hunting for quite a long time.”

Looking at the leftovers of the explosion, Watson and his team identified two composites of the element strontium — a metal known for producing the red flames in fireworks and emergency flares.

Physicists had previously declared the existence of these elements elsewhere in the universe, but hadn’t identified where they might originate from. This study fills in some of the blanks.

“The cosmological question is, Where do these elements come from?” Watson says. “It turns out, they don’t come from the Big Bang, the Big Bang only makes hydrogen and helium. The rest of the elements are made in stars.”

While strontium had been previously detected in the sun, distant stars and other places in the universe, its creation has not previously been detected. Half of the heavy elements like strontium, gold, and uranium, are produced by a neutron capture process — a set of nuclear reactions. This process only takes place in extreme environments where atoms are bombarded by a large number of neutrons — environments like the merger of two dense, neutron-heavy stars. 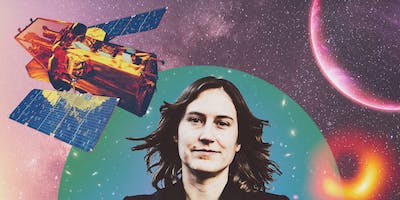 Dr. Katie Mack: We Hope to Answer the Universe’s Big Question in the 2020s

Some of our biggest questions relate to really interesting problems around black holes.
Read More

This study is the first to detail the neutron capture process in action.

There’s a lot we don’t know about how heavy elements like strontium — which are created out in the universe — end up on the Earth, according to Watson. “It’s a little surprising because these elements are precious metals, the rare elements of Earth,” he adds.

However, Watson believes that there may be clues in the 2017 data that could help solve some of the mysteries surrounding their creation and distribution in the universe.

“In some sense, we get a little bit obsessed with things like dark matter and dark energy in the universe,” Watson says. “But one of the basic questions in cosmology is, Where does the ordinary matter that we see around us, where is it created?”

Abstract: Half of all of the elements in the Universe that are heavier than iron were created by rapid neutron capture. The theory underlying this astrophysical r-process [rapid neutron capture] was worked out six decades ago, and requires an enormous neutron flux to make the bulk of the elements. Where this happens is still debated. A key piece of evidence would be the discovery of freshly synthesized r-process elements in an astrophysical site. Existing models and circumstantial evidence point to neutron-star mergers as a probable r-process site; the optical/infrared transient known as a ‘kilonova’ that emerges in the days after a merger is a likely place to detect the spectral signatures of newly created neutron-capture elements. The kilonova AT2017gfo—which was found following the discovery of the neutron-star merger GW170817 by gravitational-wave detectors—was the first kilonova for which detailed spectra were recorded. When these spectra were first reported, it was argued that they were broadly consistent with an outflow of radioactive heavy elements; however, there was no robust identification of any one element. Here we report the identification of the neutron-capture element strontium in a reanalysis of these spectra. The detection of a neutron-capture element associated with the collision of two extreme-density stars establishes the origin of r-process elements in neutron-star mergers, and shows that neutron stars are made of neutron-rich matter.