But the virus has an even more terrifying impact on the human body. The measles can potentially inflict major damage to our immune memory, according to new research.

Two investigations into a recent measles outbreak in the Netherlands, revealed that the virus deletes parts of the immune system’s memory, much like wiping a hard drive. That leaves patients vulnerable to a host of other infections, bacterias, pathogens, and diseases. The investigations were published in the journals Science and Science Immunology.

“You’ve lost the knowledge that you had learned previously to protect you in the future,” Stephen Elledge, Ph.D. a researcher at Harvard Medical School and Brigham and Women’s Hospital and a co-author on Science study, tells Inverse. “It’s like if you lost your memory about what to do when you cross the street. If you had to cross the street again, you’re at risk. You have to relearn how to do it.”

The immune system still functions: it attacks antigens and fights infection much in the same way it did before encountering the measles. But it won’t have the same knowledge, developed from previous attacks, to ward off repeat assaults.

Measles is a “major killer of children,” William Moss, M.D., professor at Johns Hopkins University and executive director of the International Vaccine Access Center, tells Inverse. It hits people young and it hits them hard.

People don’t see the impact everyday, so they get complacent about vaccinating.

Catching measles can cause symptoms including fever, cold-like symptoms, and rashes, and if untreated, can lead to death. The measles, mumps and rubella vaccine, (MMR), which came on the scene in 1963, has helped eliminate and contain the virus in certain parts of the world. Between 2000-2017, measles vaccination prevented an estimated 21.1 million deaths, according to the World Health Organization. But measles outbreaks have surged in the past few years, spurred by fear of vaccines, misinformation, and international travel to countries where the virus isn’t contained.

Elledge says people forget the seriousness of measles, especially in places where they don’t see the grave effects often.

“Before the vaccine, basically everyone on the planet was infected with the measles virus,” Elledge tells Inverse. “And the virus has been shown to cause mortality in 0.2 to 1 percent of all the people who are infected. It’s very toxic. If a million people are infected, that’s two [thousand] to 10,000 deaths.”

Measles’ recent comeback is all the more terrifying because this new research suggests the virus causes long-term damage to the immune system. 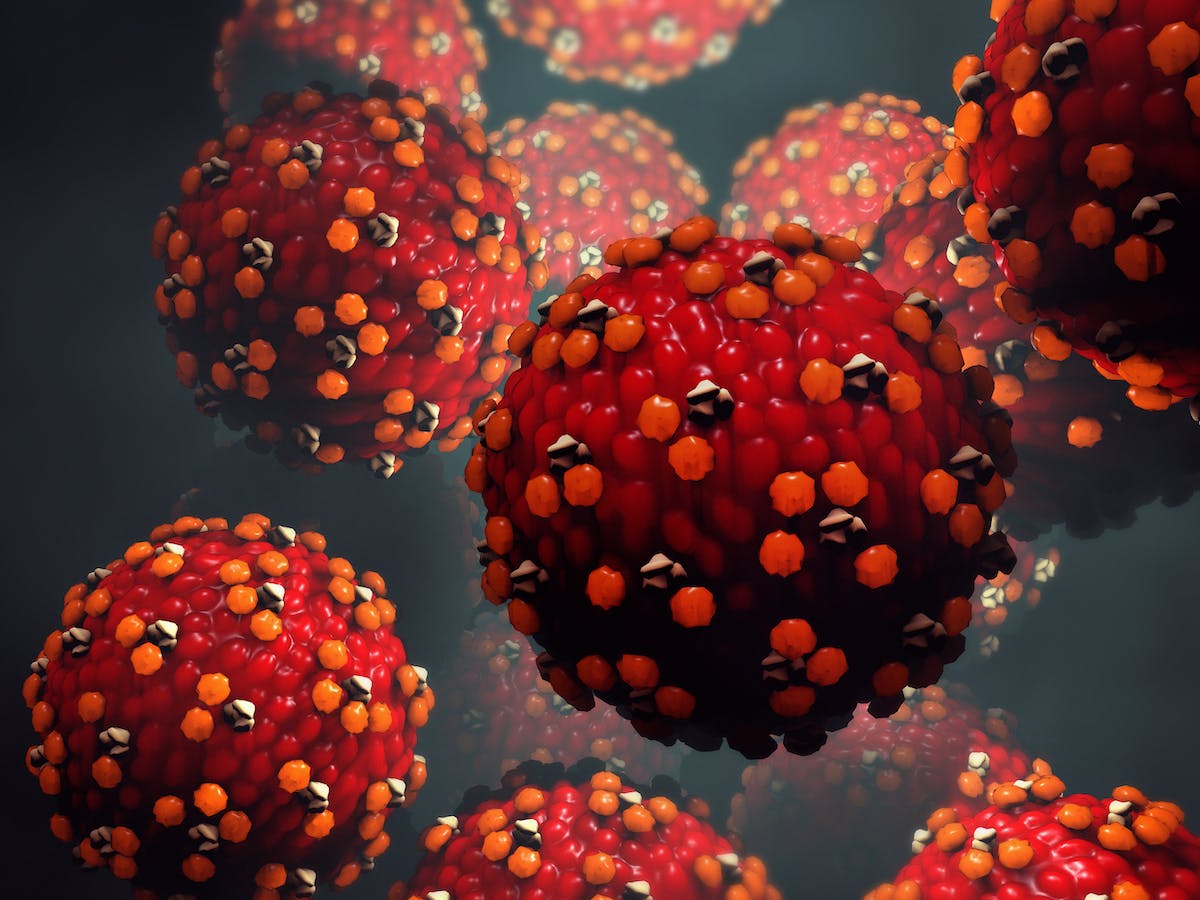 To understand the extent of the measles’ influence on the immune system, we have to understand how we even defend against foreign invaders and stay healthy in the first place.

The immune system has a toolkit to fight outside invasion from a bacteria or virus.

Over a lifetime, humans generate immune memory and build a repertoire of antibodies after we are exposed to an antigen or any foreign bodies, Moss says. The immune system develops T and B cells in response to these attacks, two long-lived cells that fight infection in the body. Even after the antigen is eliminated, these cells stick around.

“Basically their purpose is to hang out on the expectation that your body will see that antigen again and then they’re ready to respond very quickly,” Moss says.

Both studies, drawn from the same Netherlands community, discovered the measles virus diminishes the antibody repertoire, wiping the body’s record of fighting certain illnesses, and hampering its ability to fight them as effectively in the future.

In one study, researchers analyzed the blood of 77 unvaccinated children before and after a measles outbreak swept through their community. The research team, led by Elledge and Michael Mina, M.D., Ph.D. used a cutting-edge technology called VirScan, that reveals a human’s viral history from a single drop of blood. The team then replicated the results in macaque monkeys.

Measles eliminated between 11 and 73 percent of the children’s protective antibody repertoire.

“This study is showing very concretely that if we look at pathogen x or pathogen y, or pathogen z, we see decreases in the diversity and abundance of those antibodies following measles and this could put children at risk for infections with these pathogens,” Moss says.

The second study looked at 26 of the same non-vaccinated children Mina’s team did, as well as ferrets. They analyzed the blood of these children before they were infected with measles and 40-50 days after infection.

The findings echoed what the first team found — measles wreaks long-term damage on the immune system, causing specific immune memory cells to disappear even after the virus goes away.

“For the first time we see that measles resets the immune system and it becomes more baby-like, limiting how well it can respond to new infections. In some children the effect is so strong it is similar to being given powerful immunosuppressive drugs,” Colin Russell, Ph.D., senior author on the second study and professor at the University of Amsterdam, Netherlands, said in a statement.

The results of both studies jibe with previous evidence that shows the virus suppresses the immune system, making people more susceptible to other viruses and infections.

But experts question the extent to which measles threatens the immune system. “I think it’s a stretch to say that measles makes someone completely immunologically naive to everything,” Moss tells Inverse.

“I think the immune system returns just fine [after measles] in terms of its functionality. What it lacks is its memory. It’s the same idea of resetting the clock,” Elledge says.

Both studies underscore the importance of getting vaccinated against measles.

Elledge compares the measles effect on the body to a head injury’s impact on memory.

“If you’re in an accident and you hit your head, you can forget things; you may have some form of amnesia and can’t remember what happened before you got hit. Everyone understands that. The measles is like an accident that happens to your immune system,” he says. “We know how to prevent head injuries. They’re called seatbelts. A vaccine is really a seatbelt for your immune system.”

Still, some communities around the world are suspicious of vaccines, opting to risk infection for political, religious, and health reasons.

“What feeds into this too is a mistrust of government and authorities,” Moss says. “There’s this belief that natural things are better than unnatural things and they see vaccines as unnatural even though they’re made from viruses. There’s a whole kind of overlapping set of beliefs.”

Choosing to vaccinate isn’t strictly an individual decision, either. Ultimately, it comes down to “herd immunity,” the experts say.

“So this is what can happen,” Elledge says. “You’re 25 years old, you say, ‘Hey, I don’t need to get the flu vaccine.’ But then you end up getting the flu. You’re fine, but your grandmother dies.”

The elderly, babies, young children, and anyone with a compromised immune system has a harder time fighting infections like the flu or measles. Getting vaccinated helps prevent infections from spreading to these people. And if they do catch the measles, we’re beginning to know the consequences could be even worse than previously thought.

“There are real-world consequences of transmitting these things, maybe not for you but for everyone else,” Elledge says. “If it’s really not dangerous for your child, then, you know, who are you really protecting?”

Measles virus is directly responsible for more than 100,000 deaths yearly. Epidemiological studies have associated measles with increased morbidity and mortality for years after infection, but the reasons why are poorly understood. Measles virus infects immune cells, causing acute immune suppression. To identify and quantify long-term effects of measles on the immune system, we used VirScan, an assay that tracks antibodies to thousands of pathogen epitopes in blood. We studied 77 unvaccinated children before and 2 months after natural measles virus infection. Measles caused elimination of 11 to 73% of the antibody repertoire across individuals. Recovery of antibodies was detected after natural reexposure to pathogens. Notably, these immune system effects were not observed in infants vaccinated against MMR (measles, mumps, and rubella), but were confirmed in measles-infected macaques. The reduction in humoral immune memory after measles infection generates potential vulnerability to future infections, underscoring the need for widespread vaccination.

(For the source of this, and many other equally important articles, please visit: https://www.inverse.com/article/60597-measles-virus-causes-gives-the-immune-system-amnesia/)