When the protection of academic freedom is compromised, scholarship and greater society suffer the effects. 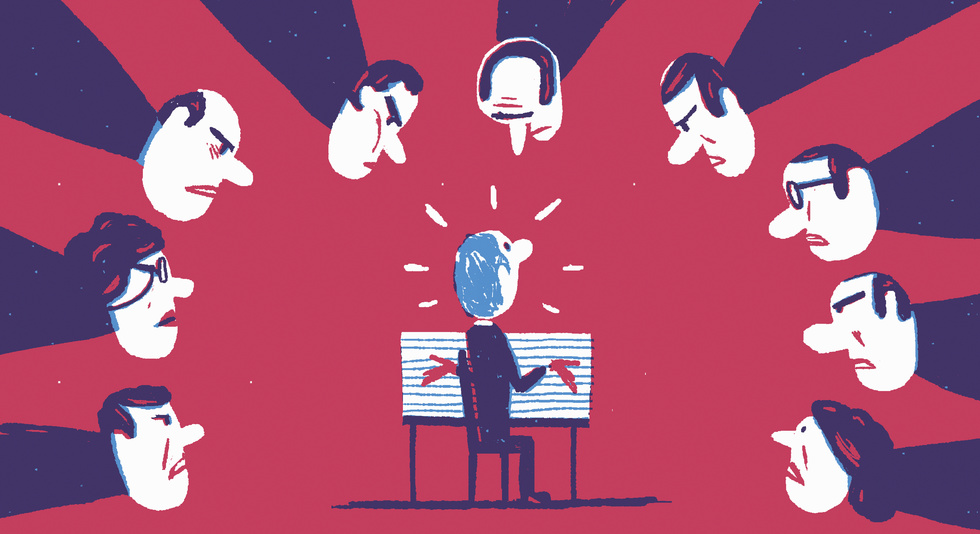 Academic freedom is a protection that’s long enabled students and professors to make the most of higher education by facilitating the free exchange of ideas. But today, outrage mobs are chipping away at this freedom by trying to silence what professors can teach, research, and express in their private lives.Outrage mobs are aggressive groups of people who temporarily band together online – and sometimes in real life – to denounce people whose ideas they disagree with. While outrage mobs can arise in other contexts – celebrities are frequently targeted, for example – given the importance of academics’ ability to explore difficult ideas freely, they are particularly problematic in the university context. Without open academic pursuit and scholarship, imagine the extent of society’s missed opportunities in regard to scientific discovery and technological innovation.

It usually happens like this: A professor expresses a view or conducts research that someone finds offensive. The offended people — who may or may not be affiliated with the university — express outrage on social media. Others join the mob. The mob then demands that the professor be punished or fired. in some cases the mob harasses the professor online or in person. Far too frequently, particularly if the professor is in a part time role, the administration gives in to these demands.

Angry mobs are nothing new. But social media has made it easier than ever to succumb to mob mentality and let our worst instincts and impulses run rampant. Outrage mobs pose a new and unique threat to professors’ academic freedom, which depends on their ability to question conventional wisdom. And the threat isn’t only that professors might lose their jobs, but also that academia might become less intellectually dynamic.

Outrage can be useful to society. It is, after all, a strong moral emotion that spurs us into action when we witness injustice, and it encourages people to come together to right wrongs in their communities. But not all outrage is created equal. Outrage is often disproportional. Further, the impact of networked outrage can often be far beyond what any outraged individual imagined or desired. This makes it all the more important to be aware of its often-corrosive and unintended effects.

Academic freedom: What it is, what it isn’t and why there’s confusion

(For the video associated with this part of the article, please visit: https://bigthink.com/Charles-Koch-Foundation/outrage-mobs/)

Rebecca Tuvel, a philosopher and assistant professor at Rhodes college, in 2017 published an article in the peer-reviewed feminist philosophy journal Hypatia. Her paper addressed the question of trans-racialism, a timely topic given the recent news coverage of Rachel Dolezal, a white woman who famously claimed a black identity. In the paper Tuvel examined if the arguments used to defend a transgender identity apply in a similar fashion to the question of transracialism. In this she adopted a technique common among philosophers – testing if reasoning used on one issue would apply equally on a different issue that appeared a close parallel.

While the article was not meant to be controversial, it generated a sizable negative response, particularly on social media. This was closely followed by an open letter signed by over five hundred academics to the journal’s editors alleging (falsely) many ethical lapses and harms– this resulted in the article being retracted (an unprecedented move).

For Tuvel, a junior scholar who has not been tenured (and for whom publications are crucial) this decision directly impacts her future career. It is worth noting the irony that the ancient female philosopher Hypatia, the journal’s namesake, is believed to have been murdered by an angry mob of zealots.

It is true that since then Tuvel also received a sizable amount of support within philosophy, and the event has led to important conversations. Yet, it does show that in this era of online outrage young academics looking to speak on any contested topic of the day risk their career.

While the outrage focused on Tuvel came largely from the left of center and inside the academy, that is not always the case. For example, in 2017, Sarah Bond, an assistant professor of classics at the University of Iowa, published an article describing how modern technology has revealed that many statues from the ancient Western world were painted. Of course, the paint faded over time, and the marble Greco-Roman statues we have today appear in a shade of white.

But art historians had mistakenly believed that ancient Greeks and Romans intended for their statues to be white, and therefore they equated white with beauty. This has long shaped the way we view the antique world, Bond argued.

“The assemblage of neon whiteness serves to create a false idea of homogeneity — everyone was very white! — across the Mediterranean region,” she wrote for Hyperallergic. Bond suggested that this misconception has over time indirectly supported racist views, and she noted that white supremacist groups like Identity Europa often “use classical statuary as a symbol of white male superiority.”

A handful of right-leaning media outlets picked up the story. Campus Reform, for instance, published a piece with the headline: “Prof: ‘white marble’ in artwork contributes to white supremacy”. Soon enough, Bond became the target of an outrage mob, which threatened her, harassed her with anti-Semitic references, and called for her termination.

“What they want to believe is that there is a liberal professor that is so sensitive to race issues that she will make race issues out of anything,” Bond told ArtForum. “They want to make me an example of the hyperliberalization of the academy.”

“Free exchange and criticism of ideas is central to academic research, and attempts to shut down anyone by threats and bullying are detrimental to free speech,” Finamore said. “We in classics support [Bond] and the need for a humane atmosphere of productive exchange of ideas.”

Galileo Galilei (1564-1642) before the Holy Office in the Vatican. The astronomer was condemned by the Tribunal of the Inquisition for having defended the theories of Copernicus, 1632. Painting by Joseph Nicolas Robert-Fleury (1797-1890), 1847. Louvre Museum, Paris.  Photo by Leemage/Corbis via Getty Images

So, what motivates outrage mobs?

Expressing moral outrage can feel good. That’s because the brain releases dopamine, a neurotransmitter that helps regulate pleasure, when we punish others for violating a moral norm. Social media can multiply this effect. Outrage mobs are usually motivated by political ideology, and people on both the left and the right engage in them. But recent research has also revealed other motivations, beyond mere political point-scoring.

It also helps to develop a sense of group solidarity and establish our moral identity within a peer group. Sometimes this can go further, with outrage being a means to signal superior moral status. By saying what we are against we define who our friends and enemies are. In the noisy world of social media outrage is a loud and clear signal of where you stand (and get likes and retweets).

This is especially true in an era of political polarization where expression of outrage can be a vent for frustration. But it’s important to remember that outrage mobs are emergent phenomena that only exist because individuals choose to participate in them.

After enough individuals jump into the fray, a mob forms that can seem greater (and louder) than the sum of its parts. Worse, bad actors can use outrage mobs to further their own specific agendas, leaving careers ruined and productive discourse even further out of reach.

What can universities, students, and faculty do?

University leaders should stop caving to outrage mobs and start standing up for academic freedom, both for students and professors. When a controversy emerges and an outrage mob forms, leaders should clearly and publicly declare their commitment to academic freedom.A good example comes from California State University, Domínguez Hills, where Professor Brooke Mascagni was targeted by an outrage mob for expressing political views in her classroom. The university stood by her, issuing a statement that read:

“Part of an education is exposing students to differing positions and opinions on a topic, in an effort to encourage critical thinking. At all times, students at California State University, Domínguez Hills are encouraged to exercise their right to free speech, free inquiry, and freedom of expression.”

Students and faculty can protect academic freedom by not succumbing to the mob when a controversy emerges on campus. First ask: Do I know all of the facts behind the story? Is the alleged offense really that bad? What was likely the intent of the professor? Is the best course of action to shut down dialogue and force others to agree with your position?

Outrage mobs lose their power when calmer heads prevail. Besides, who wants to be part of a mob? The value of higher education is not learning what to think, but rather how to think for yourself. And thinking independently requires the freedom not to follow the herd. As the American Association of University Professors wrote in the 1915 Declaration of Principles on Academic Freedom and Academic Tenure:

“Genuine boldness and thoroughness of inquiry, and freedom of speech, are scarcely reconcilable with the prescribed inculcation of a particular opinion upon a controverted question.”

(For the source of this, and many other interesting articles, please visit: https://bigthink.com/Charles-Koch-Foundation/outrage-mobs/)