Freeze it, boil it, or expose it to radiation. The water bear shrugs it off. Now we know why. 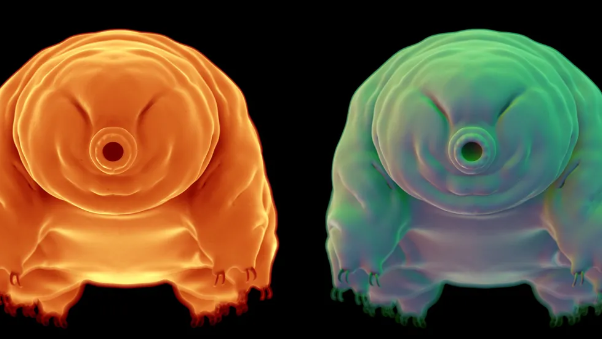 Medically accurate model of a tardigrade or water bear.
–

The tardigrade, also known as the moss piglet or water bear, is a bizarre, microscopic creature that looks like something out of a Disney nightmare scene: strange but not particularly threatening. The pudgy, eight-legged, water-borne creature appears to be perpetually puckering. It’s the farthest thing from what you’d expect an unstoppable organism to look like.

Yet, water bears can withstand even the vacuum of space, as one experiment showed. A sort of microscopic Rasputin, tardigrades have been frozen, boiled, exposed to extreme doses of radiation, and remarkably still survive. How they do this has been a mystery to science, until now.

Being a water-borne creature, scientists in this experiment examined how it survived desiccation, or being completely dried out. When it senses an oncoming dry period, the critter brings its head and limbs into its exoskeleton, making itself into a tiny ball. It’ll stay that way, unmoving, until it’s reintroduced into water.

It’s this amazing ability that piqued Thomas Boothby’s interest. He’s a researcher at the University of North Carolina, Chapel Hill. Boothby told The New York Times, “They can remain like that in a dry state for years, even decades, and when you put them back in water, they revive within hours.” After that, “They are running around again, they are eating, they are reproducing like nothing happened.”

Originally, it was thought that the water bear employed a sugar called trehalose to shield its cells from damage. Brine shrimp (sea monkeys) and nematode worms use this sugar to protect against desiccation, through a process called anhydrobiosis. Those organisms produce enough of the sugar to make it 20% of their body weight.

Not the water bear. Trehalose only takes up about 2% of its entire system, when it’s in stasis. Though employing a sugar to preserve one’s body sounds strange, the newly discovered process that the water bear goes through is even more bizarre. It turns itself into glass.

In this study, tardigrades were placed into a drying-out chamber, which mimicked conditions the organisms would encounter in a disappearing pond. As the water bears underwent anhydrobiosis, scientists examined what genes were activated. These genes produced a certain protein, which they named tardigrade-specific intrinsically disordered proteins (TDPs).

When the genes which produce TDPs were blocked, the water bears died. “If you take those genes and put them into organisms like bacteria and yeast, which normally do not have these proteins, they actually become much more desiccation-tolerant,” Boothby said. 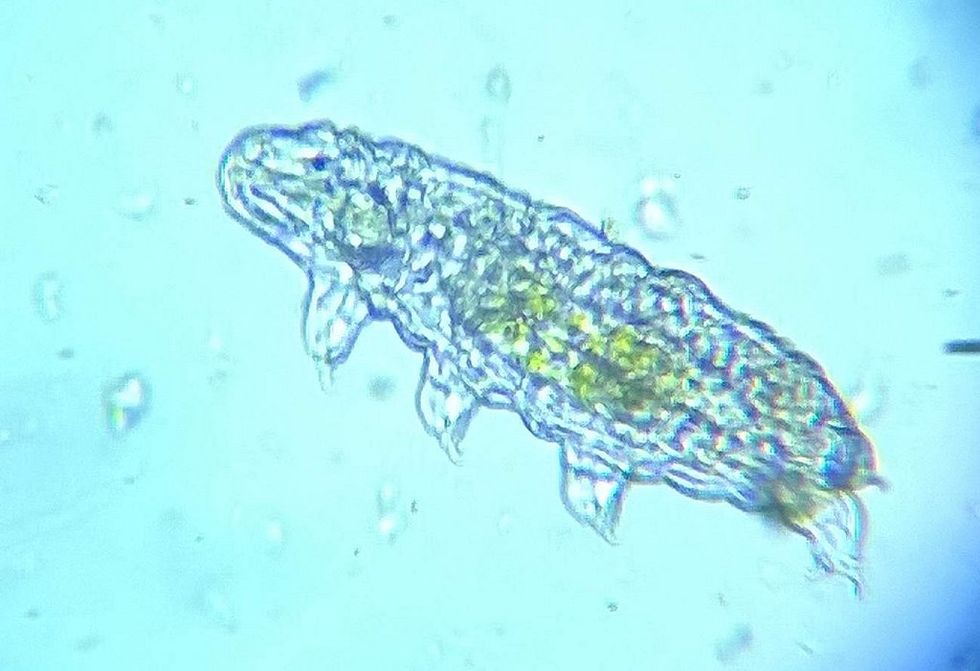 –
It’s when the drying out process begins that such genes are activated, flooding the water bear’s system with the protective protein. The process occurs in much the same way as trehalose preserves sea monkeys, according to Boothby. This is an example of convergent evolution, when two unrelated organisms develop the same trait for survival.

Usually, proteins are formed in orderly, 3D chains of amino acids. But TDPs operate differently, in a kind of random, somewhat disorganized manner. Dr. Boothby said, “It’s a really interesting question about how a protein without a defined three-dimensional structure can actually carry out its function in a cell.” Another question, is this protein used by any other organisms?

When desiccation begins and TDP is activated, it engages a process known as vitrification. Boothby said, “The glass is coating the molecules inside of the tardigrade cells, keeping them intact.” From there, it goes into a form of stasis until it detects water. When that occurs, the protein is dissolved into the liquid and the tardigrade is revived.

There could be some practical uses to this discovery. For instance in medicine, vaccines often require refrigeration. But in the developing world, it isn’t always available, which makes delivering vaccines to vulnerable, rural communities difficult.

Dr. Boothby believes that we may be able to use TDP to sort of freeze-dry vaccines or medications, for easy storage and transport. What about putting humans in stasis for space travel or when they have terminal diseases, to await a cure? No word on that, yet. Scientists have years of research ahead of them already, just to understand the inner-workings of TDP.

Some believe tardigrades may have “alien” DNA. To find out more, click here:

(For the original of this article, a video associated with it, and many other important articles, please visit: https://bigthink.com/philip-perry/scientists-finally-figure-out-why-the-water-bear-is-nearly-unstoppable/)