We’ve found tiny plastic particles in the depths of the ocean and the air we breathe, fragments of car tires and plastic bags among them.

Plastic pollution may seem like a modern phenomenon, but new research shows that microplastics have been deposited in the ocean at an accelerating rate since the end of World War II.

Between 1945 and 2009, as both plastic production and population boomed, the rate at which humans deposited plastic on Earth doubled every 15 years, report researchers in a study published recently in the journal Science Advances. It’s a statistic that might’ve seemed absurd before the advent of modern plastics development.

Jennifer Brandon, Ph.D., a microplastics biologist at the University of California San Diego’s Scripps Institution of Oceanography, and lead author of the study, describes a perfect layering.

“What happens at the surface falls right to the sea floor,” Brandon tells Inverse. “So what falls kind of falls in these perfect layers.”

People in 2010 were depositing 10 times as much plastic as they were before World War II.

The Santa Barbara Basin preserved bands of sediment showing the passage of time, thanks to its slower-moving water and low oxygen content — which mean fewer ocean floor critters kicking up sediment.

We really might be known as the ‘Plastic Age.’” — Jennifer Brandon, Ph.D.

Brandon’s team sorted the sediment samples using a high-powered microscope, then tested the plastic with a laser to check its chemical composition. “It becomes pretty obvious, as you sort it, what is the natural majority of what it should look like and what are these pieces of plastic that don’t match the rest,” she says. 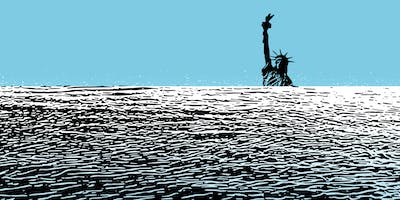 Scientists looked 125,000 years into the past. The results are terrifying.

Worldwide, humans produce 300 million tons of plastic each year. About 8 million metric tons of that plastic — the weight of nearly 90 aircraft carriers — ends up in the ocean, a 2015 Science paper estimated. Litter and runoff from streams and storm drains contribute to ocean plastic that never fully biodegrades.

These plastics, which often contain harmful additives and dyes, can also absorb persistent organic pollutants. As animals at the bottom of the ocean ingest the microplastics, the particles enter the food web and accumulate in larger animals, where they may cause liver toxicity, brain damage, and other ailments.

The authors of the new study say their results call for limiting the plastic that enters the ocean, since plastic accumulation mirrors increases in production. “This tight coupling leads us to predict that this growing rate of plastic deposition will continue to increase in the future, barring marked changes in policy or waste management,” they write.

Previous studies have suggested that plastic accumulation may be a proxy for defining the Anthropocene, the proposed term describing the current geological age in which human activity dominates the environment. The new study’s authors say their findings add merit to that idea. The postwar period begins the “Great Acceleration” of the period, the authors write, marked by corresponding increases in plastic production, human population growth, and deposits of plastics.

As the Bronze and Stone Ages have marked history textbooks, Brandon says, humans’ reliance on plastic could come to define the contemporary time.

Abstract: We analyzed coastal sediments of the Santa Barbara Basin, California, for historical changes in microplastic deposition using a box core that spanned 1834–2009. The sediment was visually sorted for plastic, and a subset was confirmed as plastic polymers via FTIR (Fourier transform infrared) spectroscopy. After correcting for contamination introduced during sample processing, we found an exponential increase in plastic deposition from 1945 to 2009 with a doubling time of 15 years. This increase correlated closely with worldwide plastic production and southern California coastal population increases over the same period. Increased plastic loading in sediments has unknown consequences for deposit-feeding benthic organisms. This increase in plastic deposition in the post–World War II years can be used as a geological proxy for the Great Acceleration of the Anthropocene in the sedimentary record.