Home
News
&
WEIRD SCIENCE
Could Earth Soon Be Swallowed Up by a Black Hole?
By Janie Hoormann –

Can Earth be affected by a black hole in the future? – Rakovi, age 12, Dimapur, India.

As we know, black holes are called that because the gravity in their center is so strong, it sucks all nearby light in. None can escape. That’s how strong a black hole’s gravitational pull is.

Black holes create the strongest gravitational pull in the universe (that we know of). So you really don’t want to get very close to one.

If you get too close, the pull of gravity from the black hole is so strong that you would never be able to escape, even if you were traveling at the speed of light.

This point of no return is called “the event horizon.”

Another reason you don’t want to get too close to a black hole is because of something we call “spaghettification.”

See also: The Internet Couldn’t Handle All the Data From the First Black Hole Photo

Turning a Star Into Spaghetti Strips

This difference in the pull of gravity (which is called a “tidal force”) would cause the star to get pulled apart. It’s kind of like pulling a lump of pasta dough into spaghetti.

Sometimes astronomers can observe this happening in other galaxies. The technical name is a “tidal disruption event,” but it just means that a star got too close to a black hole and got pulled apart.

The Closest Black Hole Is Too Far Away to Hurt Us

Thankfully, though, we don’t need to worry. There are no black holes close enough to Earth to affect us. The closest black hole to Earth that we know of is named V616 Monocerotis. It is also known as A0620-00. 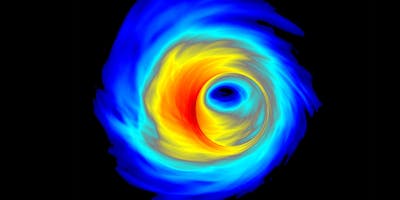 ‘Pac-Man’-like black holes are devouring each other

If Earth gets within about 800,000 kilometers (3.7 light-seconds) of this black hole, it will get pulled apart. But that’s unlikely to happen and certainly not in your lifetime.

This article was originally published in The Conversation by Janie Hoormann. Read the original article here.