An orangutan has settled into a Florida home after a court granted her personhood rights. But what is the basis for personhood? 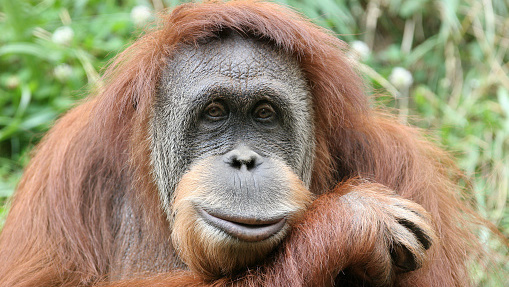 After being granted legal personhood rights in 2015, a 33-year-old orangutan named Sandra has just moved into a new, spiffy central Florida home.

Sandra has joined 21 other orangutans and 31 chimpanzees to live at the Center for Great Apes where she is reportedly thriving. Born in Germany, Sandra spent 25 years at the Buenos Aires Zoo. She was released because, according to a landmark ruling in 2015, she is a legal person who was wrongly imprisoned for the majority of her life. In the ruling, Judge Elena Liberatori declared Sandra as a “non-human person” and, thus, entitled to better living conditions and some of the same legal rights as humans.

According to legal terminology, legal personhood is not exactly synonymous with human being. The law divides the world between two entities: things and persons. According to the Nonhuman Rights Project executive director, attorney Kevin Schneider, personhood is best understood as a container for rights. Things have no rights, but once an entity is defined as a person it can obtain some rights. So, a “non-human person” refers to an entity that is guaranteed some rights for limited legal purposes.

In Sandra’s case, the ruling undercut species-membership as the basis for legally denying rights, freedoms, and protections. The Association of Officials and Lawyers for Animal Rights based its argument that Sandra should not be treated as an object based on the orangutan’s “sufficient cognitive functions.” But others have argued that it is sentience, rather than cognitive complexity, that is the essential characteristic for granting legal rights to non-human species.

The judge in Sandra’s case agreed, telling the Associated Press that by giving Sandra non-human person status she wanted to shift society’s view on other-than-human beings by telling them that “animals are sentient beings and that the first right they have is our obligation to respect them.”

Sentience is defined as the ability to perceive one’s environment and translate those perceptions into various feelings, such as suffering or pleasure. This has little to do with a species’ cognitive ability.

It’s been argued that it is inappropriate to humanize animal behavior in this way. Yet, science can never be totally free from this anthropomorphism, and there’s a solid argument as to why.

For one, humans can only ever think about animals by drawing on their own experiences, and this facilitates many of the research questions when studying other species. Yet, beyond scientific discovery, there is an ethical motivation for relating human emotions to animal experiences. Once we accept that other species might feel pain similar to what we feel, we become responsible for their suffering.

Anthropomorphism, when used responsibly, can add emotional meaning to the science of animal sentience.

But is there a distinction to be made between sentient species? After all, we are animals. Yet, humans differentiate ourselves from other types of animals. Our culture, and the taxonomies our fields of study rely on, demand categorizations of nature. But nature is not so obedient.

Research indicates that sentience extends to a wide range of animals. For example, chimps have been found to be generous, mice have exhibited empathy and honeybees have demonstrated pessimism. But because of the limits of human perception, we don’t have sufficient ways to measure just how sentient non-human species are. It likely isn’t a clear-cut answer of sentient or not sentient, but shades of grey.

Currently, most of the research on animal sentience has focused on vertebrate species and been mammal-centric. It is generally accepted that vertebrates (with the disputable exception of fish) are sentient, and that invertebrates are less-so. These evolving distinctions have made nonhuman personhood protections a messy legal area.

Admittedly, humans have something these other sentient beings apparently do not: The cognitive ability to create complex cultures which have allowed us to conceive of and communicate a claim of rights. But, as environmental researcher Uta Maria Juergens has argued, “If we pride ourselves on our unique intellect, we ought to also pride ourselves on assuming the responsibility that comes with it.”

(For the source of this article, as well as a video relating to it, and many other equally interesting articles, please visit: https://bigthink.com/culture-religion/non-human-person/)