Buckyballs are the rule-breakers of chemistry. These strange molecules are made up of 60 carbon atoms, fused together in a soccer-ball shape. For years, scientists assumed they could only be made in the lab, until astronomers found them bopping around in deep space in 2010.

The discovery challenged everything scientists thought they knew about the chemical landscape of space. But how these carbon soccer balls came to exist in space, against all expectations, remained a mystery.

Enter a new study, published recently, that traces the origin of these mysterious balls, and how they arise from the ashes of dying stars, as well as how such complex molecules found themselves here on Earth.

But, what are buckyballs, exactly? And why are they so unusual? Here, Inverse answers your questions about one of the universe’s weirdest chemical phenomenons.

What the ‘buck’ are buckyballs?

Buckminsterfullerene, to give the buckyball its full name, is made in the lab by creating “vapor of carbon atoms and to let them condense in helium,” according to one of the molecule’s three discoverers, Richard Smalley.

The molecules that this process generates are composed of many carbon atoms fused together in a cage-like structure. In buckminsterfullerene’s case, the molecule is composed of 60 carbon atoms and forms a shape that uncannily resembles the geodesic domes designed by architect R. Buckminster Fuller — it is from him that the buckyball gets its iconic name.

“Nature is doing a lot of things that we don’t give it credit for.”

Buckyballs have some unusual properties to go along with their strange structure: They are incredibly stable, and can withstand high temperatures and high pressures. They are also the heaviest-known molecule to exhibit particle-wave duality — meaning they can behave like a wave and a particle at the same time — a fundamental principle of quantum mechanics.

Where do buckyballs come from?

Buckyballs were discovered and characterized (along with other  of the fullerene molecules) in 1985 by a team led by Harold Kroto, Robert Curl and Smalley. Together, the three chemists won the 1996 Nobel Prize for Chemistry for their work.

The discovery was a “spiritual experience,” Smalley said in his Nobel address. What he found so incredible about these molecules was that they suggested that carbon has a “genius for spontaneously assembling into fullerenes” — something that defied what chemists thought they knew about carbon, one of the most fundamental and important elements on Earth.

As time went on and scientists got to grips with buckyballs and their potential, things got even weirder. In 2010, the NASA Spitzer Space Telescope caught a glimpse of the buckyballs for the first time in space, tucked away in the clouds of a planetary nebula, or the remains of a star after it has shed its outer layer.

Two years later, scientists discovered particles of buckyballs in the gas orbiting around a star — essentially stacked up buckyballs in a single mass — adding weight to the initial NASA observations.

And in 2019, the Hubble Space Telescope provided the most concrete evidence of buckyballs in space yet. It detected the spherical molecules floating around in interstellar medium.

(To watch the video, after you finish reading the rest of this article, click here:
https://www.inverse.com/article/60965-what-are-buckyballs/)

These observations defied a prevailing theory of the limits of the universe: that only light molecules, composed of one to ten atoms, could ever be present. Instead, these buckyballs contained up to 60-70 Carbon atoms.

But then again, nothing about buckyballs is conventional. Interstellar space is mostly made up of hydrogen and helium, and carbon atoms are known to bond with different kinds of atoms. So finding a cluster of pure carbon atoms at all puzzled scientists.

How do buckyballs form in space?

The consensus among scientists had been that intense radiation — such as that emitted by a dying star — would kill off any complex molecules, including buckyballs, in space. But, once again, buckyballs defy expectation in the biggest way possible.

“The process that we previously thought would destroy any complex molecules actually creates them,” Jacob Bernal, a graduate student at the University of Arizona and first author on the new study, tells Inverse. “It really shouldn’t form.” 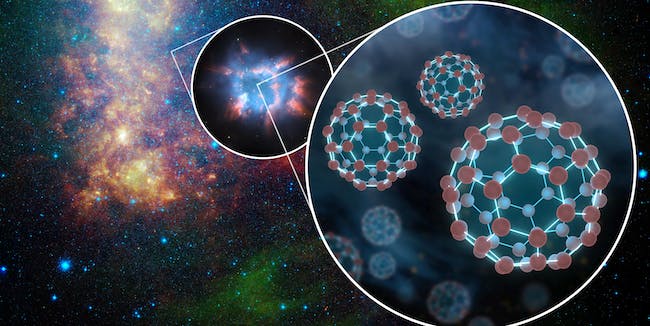 Bernal and his team created a simulation in the lab, which revealed these space buckyballs likely originate from silicone carbide, or the stellar dust made up of carbon and silicone that is left behind by a dying star. The silicone carbide is hit by the heat resulting from the star’s death, melting the silicon from the surface of the molecule — leaving behind the pure carbon.

The finding sheds light on how some of the heavy elements that exist on Earth got here in the first place — a mystery that could only be solved by the cosmos.

“This is the tip of the iceberg,” Bernall says.

“Among the things that our group thinks about is how these kinds of compounds could have been delivered to the early Earth, and the origins of elements in the stars,” Tom Zega, associate professor at the University of Arizona’s Lunar and Planetary Lab, and co-author of the study, tells Inverse. “It’s part of our job to think about how these things originated.”

Little did scientists know in 1985 that these weird carbon clusters had actually been floating around in space since the early universe.

“Nature is doing a lot of things that we don’t give it credit for,” Zega says.

What can buckyballs be used for?

Buckyballs’ stability and strength have materials scientists excited. In fact, buckyballs and structures made from them could one day replace silicon — the element on which computers and other electronic devices depend. 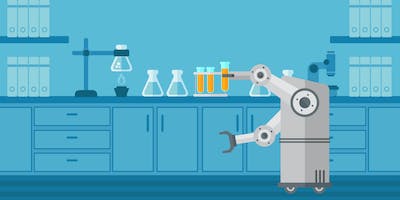 Say hello to the SchNOrb. It could change chemistry.
Read More

They can also be used to make ultra-hard coatings — a property that could make them useful for developing nanotechnology. If buckyballs can be made into a suitably tiny pod, for example, then theoretically it could be used to deliver drugs to cells more efficiently, although there is conflicting evidence over how safe such nanomedicines, despite their effectiveness, would be for humans.

So far, the buckyball hasn’t broken out from its status as an iconic chemical molecule to become an equally iconic product or material in the same way the carbon molecule graphene, for example, has. But judging by its history, it seems likely that the buckyball will continue to defy expectations — and perhaps even revolutionize science.

(For the source of this, and many other equally interesting articles, and to watch a video associated with it, please visit: https://www.inverse.com/article/60965-what-are-buckyballs/)