Home
News
&
WEIRD HISTORY
Lucille Ball And Desi Arnaz Founded A Production Company, And You Can Thank Them For ‘Star Trek’

Everyone’s heard of Lucille Ball and I Love Lucy. But not as many people are familiar with Desilu Studios, and even fewer know the true story behind Lucille Ball and Star Trek. In fact, according to an influential studio executive, Star Trek never would have aired if not for Lucille Ball. That’s because Ball was president of a television studio in the 1960s, becoming the first woman to run a major TV studio, and she’s the one who produced Star Trek. But the story of Desilu Productions goes much deeper: the studio revolutionized television in more ways than one.

Behind the scenes, CBS initially didn’t want to air I Love Lucy because of Lucille Ball and Desi Arnaz’s interracial marriage. And the couple’s tumultuous relationship made it difficult for Ball and Arnaz to work together. But when it came to the professional realm, the pair shaped television by inventing the rerun and making millions from their show. Rather than simply living the Hollywood lifestyle, Ball invested that money back into Desilu Productions, where she produced unique shows, like Mission: Impossible and Star Trek.

Ball was willing to risk everything for Star Trek, even after an executive warned her the show would ruin the studio.

In 1950, Ball was a radio star, and Arnaz was on tour promoting his band. That year, CBS approached Ball about turning her radio program, My Favorite Husband, into a television show. Ball agreed, on the condition that Arnaz could play her husband.

At first, CBS didn’t want to cast the Cuban Arnaz on the show that became I Love Lucy. They worried that some viewers wouldn’t approve of the marriage. Ball and Arnaz were committed to the idea, however, and formed Desilu Productions to produce the pilot episode. They even spent $5,000 to finance the project.

The pilot was such a success that CBS picked up the show.

That wasn’t the only innovation Ball and Arnaz introduced at their insistence: I Love Lucy was the first ever multi-camera sitcom, and it was the first to be filmed in front of a live studio audience.

Ball And Arnaz Invented The Rerun, Making Themselves Millionaires

From the start of their television careers, Ball and Arnaz made it clear they were going to change the industry. When they began I Love Lucy, the two negotiated for the show to be shot in Los Angeles, where they lived, instead of New York, where almost all television shows were filmed at the time. And rather than utilize the industry standard of kinescopes to preserve episodes after they aired live, the duo insisted the show shoot on film. Ball and Arnaz convinced CBS to make the change, and the result made the stars rich for the rest of their lives.

Arnaz and Ball knew it would cost more money to shoot the show on film from Los Angeles, compared to the method other shows used. So they agreed to take a pay cut – from $5,000 a week to $4,000. The pair added a condition, though: Desilu Productions would own the episodes after they aired. CBS agreed, and because of the higher film quality of the episodes, Ball and Arnaz enabled the introduction of the rerun. The deal meant I Love Lucy was the first show in syndication, creating a billion-dollar industry.

The Couple Cashed In To Finance Their Studio

After inventing the rerun, Ball and Arnaz turned around and sold the syndication rights to the first 180 I Love Lucy episodes back to CBS for $5 million. The couple used the profits to buy RKO Studios in 1957. Ball’s radio program, My Favorite Husband, had aired on RKO. Now, she owned her own 14-acre studio lot, next to Paramount.

Hit series like The Dick Van Dyke Show and The Andy Griffith Show filmed at the Desilu lot. 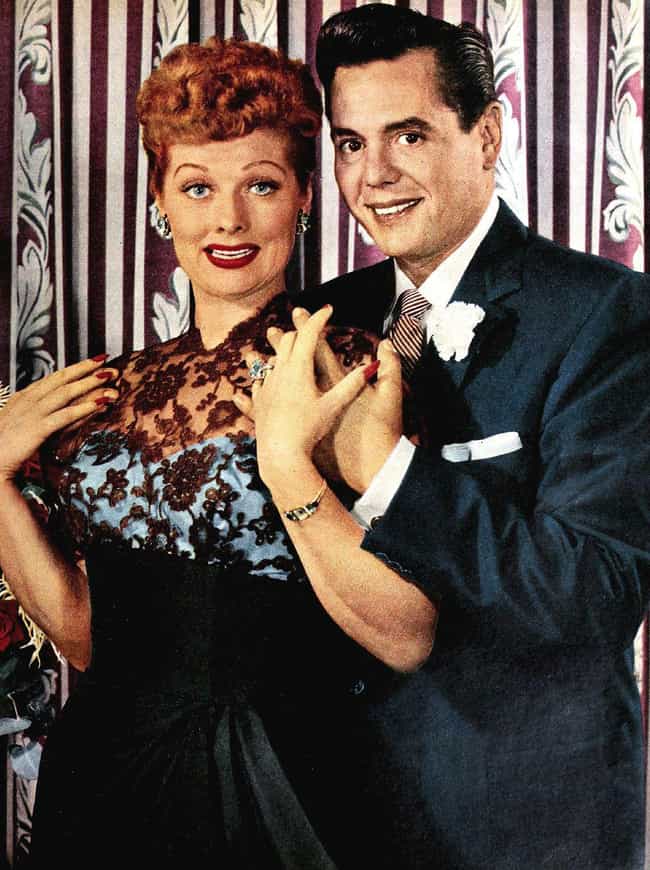 While Ball and Arnaz ran Desilu Productions together from 1950 to 1962, they divided their efforts. Arnaz managed business choices, using the same instincts that netted the couple millions in profits. Ball, on the other hand, drove the artistic decisions.

The comedian personally listened to pitches for new shows, choosing which Desilu would produce. Ball was skilled at finding shows that would catch on, including The Untouchables, which became a hit show from 1959-1963.

Behind the scenes, however, Ball and Arnaz faced personal problems. In 1960, the couple divorced, and in 1962, Ball decided to buy out Arnaz.

The biggest hit produced by Desilu in its early years was The Untouchables. After it went off the air in 1963, Ball was on the hunt for her next one. In 1964, Ball met with Bruce Geller and Gene Roddenberry. Geller brought an idea for a spy show he called Mission: Impossible. The concept was expensive, but Ball saw the appeal.

At First, Ball Had No Idea That ‘Star Trek’ Involved Space

Gene Roddenberry met with Ball in 1964 to pitch Star Trek. Based on the name, Ball initially misunderstood the concept. She thought the stars were Hollywood celebrities, while the “trek” referred to traveling abroad. Essentially, she believed that Roddenberry wanted to create a show where personalities played USO shows overseas.

Of course, the mix-up was soon straightened out, and Ball became a behind-the-scenes champion for Star Trek.

Desilu Was Struggling When ‘Star Trek’ Came Along

In 1962, Ball bought out Arnaz to become the president of Desilu Productions. She was starring in The Lucy Show, ranked number two in ratings. And Desilu operated the largest studio in Hollywood, with 36 sound stages.

But the production company, which was making millions a year in the mid-1950s, saw a downturn during Ball’s early years as president. In 1963, The Untouchables was canceled, and The Lucy Show was the only Desilu-produced series on the air. Ball knew she needed new shows, and she wanted them to be unique. The next year, Ball met with Gene Roddenberry, who pitched Star Trek.

Ball nearly faced a mutiny at Desilu when Gene Roddenberry delivered the script for “The Cage,” the first episode of Star Trek. The writing was like nothing else on television. It was filled with strange words and demanded special effects that would eat up the budget.

Ed Holly, an executive at Desilu, said, “I told Lucy, ‘If we do these [Star Trek and Mission: Impossible] and are unfortunate enough to sell them as series, we’re going to have to sell the company and go bankrupt.'” That’s because the studio would lose thousands of dollars on each episode, even if they could find a network willing to air them.

But Ball pushed for the series, refusing to give up even after CBS turned down the show.

Ball saw Star Trek as a gamble. As a producer, Ball wanted shows that were unique, and Star Trek certainly fit the bill. In 1965, NBC turned down the pilot episode of Star Trek. Ball, refusing to give up, agreed to help finance a second pilot. The Desilu board objected, pleading the show could end the company. But Ball persisted, and the first episode of Star Trek won its time slot in 1966.

Desilu executive Ed Holly says, “If it were not for Lucy, there would be no Star Trek today.”

Ball Was The First Woman To Head A Major TV Studio

Today, Lucille Ball is mostly remembered as a comedian and actor, while I Love Lucy remains one of the most beloved television shows in history. But most people don’t realize the vital influence Ball had on television from behind the scenes.

When Ball became president of Desilu, she was the first woman in charge of a major television studio. Ball turned the struggling studio around by taking risks on unique shows, like Mission: Impossible and Star Trek. She also made herself even richer when she sold Desilu to Paramount.

When Ball took over Desilu Productions as president in 1962, the studio was struggling. Revenues were down, and the only show produced by Desilu on the air was The Lucy Show. But Ball committed herself to turn things around to make the studio profitable again.

In 1967, Desilu was generating a profit, and Ball decided to sell her shares. She negotiated a deal with Paramount Studios, netting $17 million.

(For the source of this, and many other equally interesting history-related articles, please visit: https://www.ranker.com/list/lucille-ball-desi-arnaz-production-company/genevieve-carlton/)