A giant penguin that stood as tall as a person has been identified from fossil leg bones discovered by an amateur palaeontologist on New Zealand’s South Island.

At 1.6 metres and 80kg (12st), the new species, Crossvallia waiparensis, was four times as heavy and 40cm taller than the emperor penguin, the largest living penguin.

The penguin joins other oversized but extinct New Zealand birds including the world’s largest parrot, an eagle with a three-metre wingspan, 3.6 metre-tall moa birds and other giant penguins. 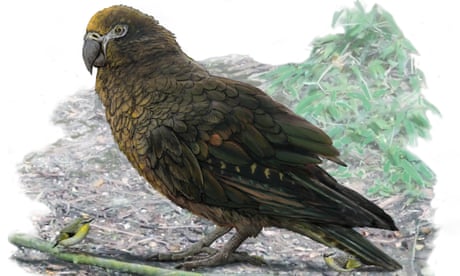 Fossils of largest parrot ever recorded found in New Zealand

Enormous penguins are believed to have rapidly evolved in the Palaeocene epoch – between 66 and 56m years ago – after the dinosaurs disappeared and large marine reptiles also vanished from southern hemisphere waters that were much warmer than today.

The giant penguin was identified as new to science by a team from Canterbury Museum in Christchurch and Senckenberg natural history museum in Frankfurt after bones were found by Leigh Love, an amateur palaeontologist, at Waipara.

It is the fifth ancient penguin species described from fossils uncovered at Waipara, where a river cuts into a cliff of greensand.

According to researchers, the penguin’s leg bones suggest its feet played a greater role in swimming than those of modern penguins.

It is not clear why the giant penguins disappeared from the oceans millions of years ago but it may be linked to the arrival of large marine competitors such as seals and toothed whales.

The new species is similar to another prehistoric giant penguin, Crossvallia unienwillia, which was identified from a fossilised partial skeleton found in the Cross Valley in Antarctica in 2000.

Dr Vanesa De Pietri, a natural history curator at Canterbury Museum, said the discovery of a second giant penguin from the Palaeocene was further evidence of the large size of ancient penguins. “It further reinforces our theory that penguins attained a giant size very early in their evolution,” she said.

He added: “When the Crossvallia species were alive, New Zealand and Antarctica were very different from today – Antarctica was covered in forest and both had much warmer climates.”

(For an illustration of the size of Crossvallia waiparensis, which stood 1.6 metres tall and was four times heavier than an emperor penguin, please visit: https://www.theguardian.com/science/2019/aug/14/human-sized-penguin-fossil-discovered-in-new-zealand/)

(For the source of this, and many other equally interesting articles, please visit: https://www.theguardian.com/science/2019/aug/14/human-sized-penguin-fossil-discovered-in-new-zealand/)