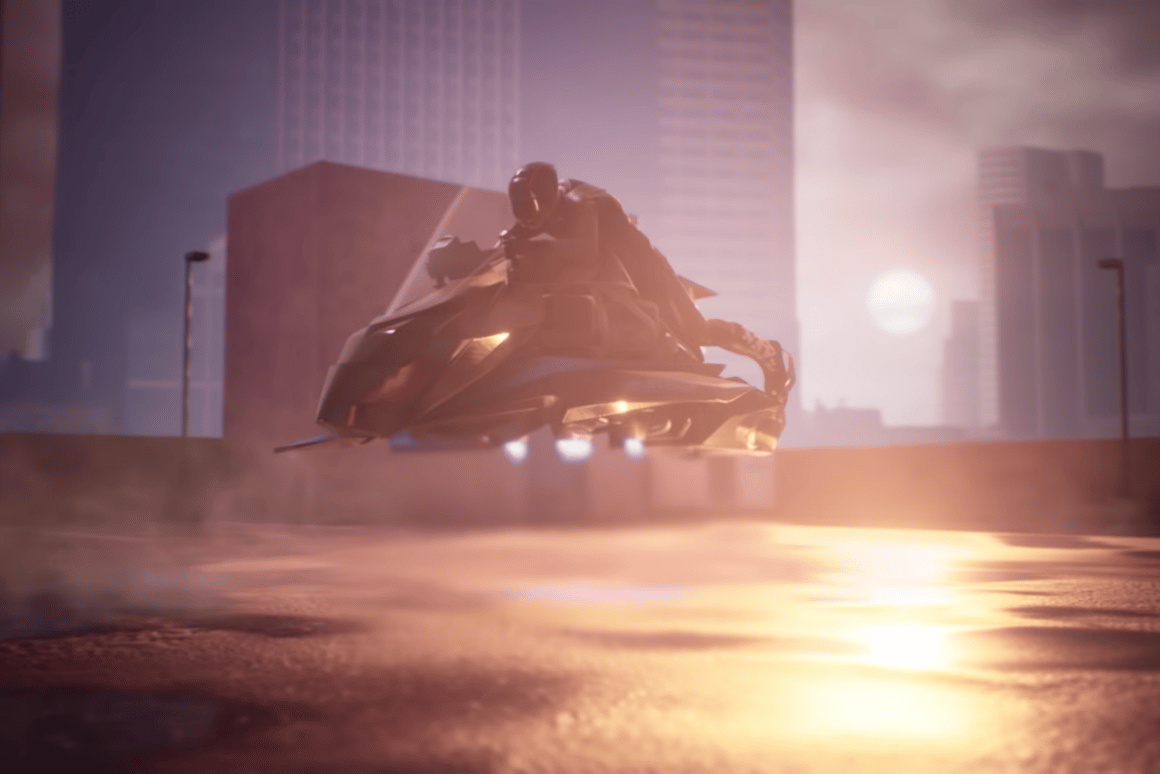 The Speeder will have VTOL capability.   Jetpack Aviation.

With his crazy jetpack performance business growing and thriving, Australian innovator David Mayman is hoping to fry some bigger fish in the form of a Star Wars-inspired flying motorcycle. It’s a very strange design, with the entire thing balanced on a central column of thrust from five turbine engines, all bunched together and gimbaled for balance and control. Last time we spoke, Mayman described the computer-controlled process of flying the thing as similar to balancing a pencil on the tip of your finger – and yet he’s confident it’ll work.

Having just been through the renowned YCombinator startup boot camp, Mayman has managed to raise the capital to take the Speeder concept through to a full-size prototype – and in the process, he’s also starting to envision a fully-enclosed version that would be capable of upwards of 400 mph (644 km/h).

Mayman is always a wonderful interview – not to mention the subject of a terrific documentary film. His life as a personal aviation pioneer is absolute madness – we caught up this time just after he’d finished a dual jetpack performance in front of two million people at Huntington Beach, California, in which he and Jetpack Aviation’s other lead pilot, Boris Jarry, had found themselves drenched with seawater from a firefighting display as they rocketed up and down the coastline. That’s almost a regular day for Mayman by now, but he’s wonderfully technically minded, and always open for a frank discussion, which is why I like to reproduce our chats at length. Hopefully it’s as fun to read as it is to chat.

This time, Mayman discusses who’s funding the Speeder flying motorcycle, what they’re planning to do with it, the potential of a super-high-speed version, why he’s sticking with jet turbines rather than looking at electric propulsion for now, where flying motorcycles might fit into the future VTOL transport mix, and his plans to fly both the Speeder and the jetpacks into the backs of moving planes one of these days … what a life, eh!

What follows is an edited transcription.

Loz: So, who’s ponying up the money to help you build these Speeders?

David Mayman: So at the back end of YCombinator, the accelerator program, we found some angels that got involved. They put up maybe 3 or 400,000. Then we just finished a seed round a couple of weeks ago for US$2,000,000, and that was led by Tim Draper at Draper Associates up in Silicon Valley. Pretty well known as a great moon shot investor – was one of the first investors in Tesla and SpaceX. He doesn’t mind taking a hardware bet.

One of our other main investors is Jaan Tallinn, he was one of the early guys at Skype. He’s based in Estonia, and also seems to love hard tech and mobility. There was a good fit there. Then we’ve got Boost VC, in Silicon Valley, and YCombinator themselves.

Loz: So a good mix of people to help push things forward?

I think awesome people in terms of understanding what it takes to be successful in aerospace. You can’t take a short term view. It’s not a software as a service.

The idea is that we finish the first prototype, in say nine to 14 months. The long-term vision will definitely be EMS (emergency medical services), probably starting with military EMS and medical services.

The way I pitched it to them, and they agreed, is that if we wait for certification for urban air mobility, we could be waiting a long time and spending a heck of a lot of money. So, instead of focusing on the concept of mobility on demand, focus on something that doesn’t require immediate certification. That’s the case for most military uses, it just doesn’t require FAA oversight.

That doesn’t mean the machines can’t be built well – you still have to do all your modeling and study and whatnot, but you don’t have to go through a certification process.

A conference I went to called Revolution Aero in San Francisco a month ago, the regulators were there, and the big airframe guys like Boeing, and a lot of investors in the room that have money in Lilium and what have you, and they were saying these things could cost you a billion dollars just to certify in the long term.

Loz: You’re saying any individual airframe for an eVTOL air taxi could cost each company up to a billion dollars to certify?

Yep, to certify that airframe. Now, if you go and build an A380, it’ll cost you a lot more than that. If you’re Cessna and you’re building your 20th version of a Citation, it may take you less than that. But if you’re developing something completely new, this was the ballpark they were talking about. Even if it’s half that, that’s a massive amount of money for people to raise.

Who’s going to fund that? Who’s going to put up that kind of money? VC land? Private equity? Some kind of strategic alliance between the airframe makers? Nobody really knows, because they’re not there yet. They’re still building prototypes.

The other interesting stat is, seven years ago there were 10 players in the VTOL space, now there’s something like 260. It’s gone mad, everybody wants a piece.

Loz: Yeah, a piece of that opportunity to spend a billion dollars on paperwork! I was on the phone to Lilium a couple of weeks ago, and we glossed over certification, they said they didn’t see any barriers to certification. The regulators are on board and trying to be helpful …

Maybe there aren’t technical barriers, but it’s a new airframe, a new type, a new variant. That’s the intel we got from an industry group. So I don’t know where that kind of money’s going to come from. What VC’s going to put that up?

Loz: For a technology the public will have to learn to trust …

Exactly. My focus is on building. I want to get this machine built, and I don’t want to get stuck trying to raise however much it is, trying to go through the certification process, particularly when the customers that have demonstrated interest thus far, their use cases don’t require certification in anyway.

An example is the Air Force Explore submission, which we put together a few weeks ago. And this is going to the edge of what’s possible right now. They’re looking at how we can deliver materials and equipment and supplies to a downed pilot, or isolated airman as they call it, anywhere in the world, within two hours of them ejecting from an aircraft. And probably from space – this might be delivered from space.

And I said “guys, what if we could drop something out of a C130, that could position itself somewhere, and it could land vertically, it could deliver equipment and supplies that an ejection seat doesn’t have the capacity to carry, but guess what, it could also possibly extract that pilot. And just to suspend disbelief for a moment, what if we could fly that aircraft back into the back of the C130?”

There’s no reason these days why that won’t become possible. And that doesn’t require certification.

Yep. It is right now, but we’re talking right now about doing jetpack flights, manually flown, into the back of cargo planes in the air. So we’re going to learn at some stage. (laughs)

A lot of parachutes on board, and some brave pilots in the C130 (laughs).

But going back to the pitch, the mid term is definitely this military and EMS idea of being able to deliver a couple of hundred kilos of anything to anywhere, or extract a person autonomously. The whole autonomous automation space is moving ahead so fast because of the huge investment going into motor cars, that there is no doubt this is something we’ll be able to do. It’s just a matter of how much more money we’d need to raise beyond the seed round to make it do all that.

The seed round will get us a prototype that’s flying with a pilot, and also very basic autonomous maneuvers without a pilot. Come up into a hover, transition forward, stop, transition back, stop. No see and avoid, nothing fancy at this stage. That’s the plan.

I think in the future when we move to urban air mobility, there will be a place for a piloted craft where they have three to four passengers, and the economics will work for that. I also think there’s a case for a one- or two-place vehicle that could either be autonomous or piloted, and probably a good deal faster than the eVTOLs.

Our position is, we’re smaller, so we can land wherever. We don’t have many moving parts, and we’re faster in terms of airspeed. That’s resonating, there’s no doubt that everyone else is focusing on eVTOLs, with open rotor systems or tilt wings. We’re sticking by our single-place or two-place vehicle.

They’ll be turbojet powered initially. And the reason, as we’re telling our investors, is that energy density isn’t there yet with lithium ion or lithium polymer batteries. I still don’t see any evidence that it’s just around the corner. There were lots of discussions around this at Revolution Aero. Nobody is yet to say for sure that next year, or the year after, we’ll be seeing huge improvements in energy density of batteries.

There are some eVTOLs out there right now that have raised a lot of money, that simply cannot fulfill their basic missions with energy density where it is right now. They’re raising capital into the hope of a future energy density we don’t have right now.

Loz: Is there much talk going on right now about hydrogen? Obviously, hydrogen has that energy density, as well as quick refueling … it’s got its issues obviously.

Storage, that’s the issue, it does have great energy density, as you say. But how do you store it? If you compress it as a gas, there needs to be something that can hold it. We haven’t seen it commercially demonstrated yet. Maybe there’s a bunch of people in stealth, and they’re about to come out with stuff.

Loz: Obviously Toyota and Hyundai/Kia are trying to push hydrogen in the auto market, Korea’s committing to a whole hydrogen economy, Australia’s getting involved in energy exports via liquid hydrogen into that region, and Hyundai’s just hired a bunch of guys from NASA to head up a flying car division … and then, of course, there’s Alakai Skai out on the east coast saying that a liquid hydrogen fuel cell system will give them 400 miles of range on a five-seat multicopter that doesn’t even have to transition to winged flight for efficiency. They’re not bothering with wings, they can carry so much energy on board that they’re happy to just burn it. Hydrogen stores something like 230 times more energy per kilogram than lithium, so there might be some real potential in fuel cell aviation. It’s got me re-evaluating my stance on hydrogen.

I need to look at that again! But to your initial question, there’s lots of talk around energy density at these conferences, but I’ve hardly heard hydrogen discussed at all. And hardly any talk about kerosene and turbojet engines like we’re using, either! (laughs)

But for a lot of the aircraft in development right now, battery density does need to improve from where it’s at. And when it does, we can easily move from turbojet engines to electric propulsion ourselves. Ninety-nine percent of the challenges we’ve got between now and the end of next year building the Speeder prototype are in stabilization. Once that’s solved, the propulsion system, to some extent, isn’t such a big issue.

(For the balance of this rather lengthy interview, and to see all 14 images of the Jetpack Flying Motorcycle, please visit: https://newatlas.com/aircraft/david-mayman-interview-speeder-flying-motorcycle/)