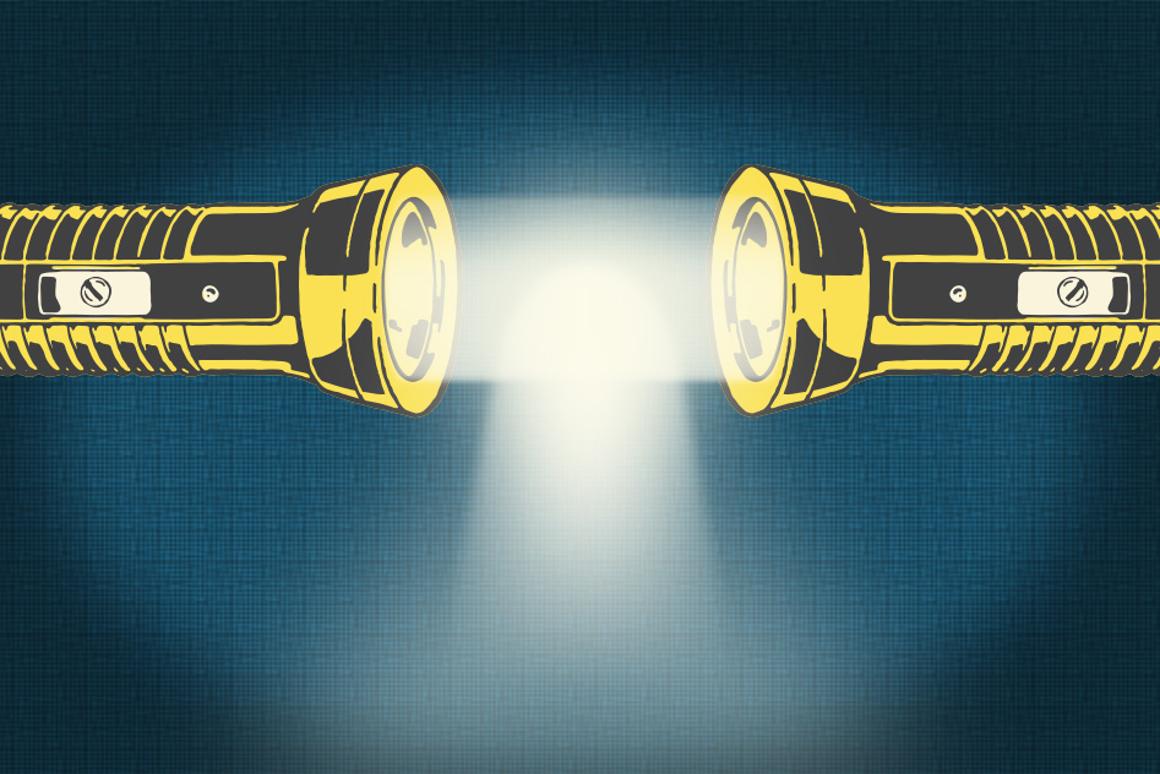 An MIT and Harvard team have developed a way to make photons of light interact with each other, which could have applications in quantum computing.  Christine Daniloff/MIT.

Photons, the elementary particles that make up light, are known to be fast, weightless and to not interact with each other. But in new experiments, physicists at MIT and Harvard have now created a new form of light, demonstrating that groups of photons can be made to interact with each other, slow down and gain mass.
The new study builds on the team’s earlier research into making “photonic molecules,” which involved coaxing pairs of photons into interacting with each other. If that kind of unexpected interaction could take place between two photons, the team reasoned, could it happen between three or more?”For example, you can combine oxygen molecules to form O2 and O3 (ozone), but not O4, and for some molecules you can’t form even a three-particle molecule,” says Vladan Vuletic, lead researcher on the study. “So it was an open question: Can you add more photons to a molecule to make bigger and bigger things?”

To find out, the team ran similar experiments to those earlier ones. First, they ultracooled a cloud of rubidium atoms down to almost absolute zero, which effectively freezes them in place. Then, they shone a very weak laser beam through this cloud of stationary atoms. This beam only sends a few photons through at a time, and the scientists then measured them when they emerged from the cloud.

Normally, a stream of single photons would exit the cloud at random intervals, but in this case, they were seen to emerge in groups of two and three. Not only were the photons exhibiting attraction, but they’d actually gained mass – only that of a fraction of an electron, but that’s a leap for a normally weightless particle. Gaining mass also slowed down their speed, making them about 100,000 times slower than the speed of light they’d normally travel at.

The researchers also measured the frequency of the photons’ oscillation, known as their phase. The larger the phase, the more strongly particles are interacting, and the team found that three-photon molecules had a phase shift three times larger than that of photon pairs.

“What was interesting was that these triplets formed at all,” says Vuletic. “It was also not known whether they would be equally, less, or more strongly bound compared with photon pairs.”

So why are the normally lone-ranging photons suddenly interacting with each other? The team’s hypothesis is that as photons bump into the rubidium atoms, they form polaritons – quantum particles that are part-light and part-matter. Polaritons have mass, which is how they can bind to other polaritons. Once they leave the cloud, the atoms they’ve picked up stay behind, but the photons remain bound together.

Since these bound photons are essentially “entangled”, they could find use in quantum computing.

“Photons can travel very fast over long distances, and people have been using light to transmit information, such as in optical fibers,” says Vuletic. “If photons can influence one another, then if you can entangle these photons, and we’ve done that, you can use them to distribute quantum information in an interesting and useful way.”

Attraction is just one way that photons may be able to interact, and in future the researchers plan to experiment with other kinds of interactions, including making photons repel each other.

“It’s completely novel in the sense that we don’t even know sometimes qualitatively what to expect,” says Vuletic. “With repulsion of photons, can they be such that they form a regular pattern, like a crystal of light? Or will something else happen? It’s very uncharted territory.”

(For the source of this, and many other equally interesting articles, please visit: https://newatlas.com/photons-interact-new-form-light/53436/)