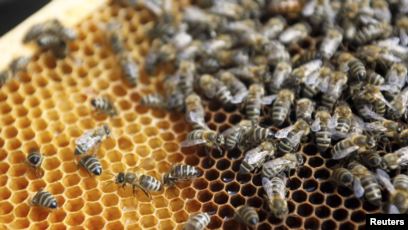 After 20 years in the US Military, Eric Grandon’s life was in a downward spiral.

Six tours to the Middle East, including Operation Desert Storm, had taken their toll on his body and his mind. When he left the service in 2005, he was showing signs of Gulf War syndrome and post-traumatic stress disorder.

A particularly horrific flashback in 2011 left Grandon unable to continue in his job as a physical therapist assistant and for two years he battled anxiety, depression, and suicidal thoughts. “Every day I got up and I’m like ‘I wonder if it’s going to be today’,” he says.

In 2013, it was fellow veteran James McCormick, director of the Veterans and Warriors Agriculture program, who helped Grandon turn his life around. McCormick encouraged Grandon take up farming, which helped him with his own PTSD.

Aside from farming, Grandon was drawn to bees.

“Once I got in the hive for the first time, that’s when the magic happened. That’s when I noticed the outside world went away. There was no intrusive thoughts, no anxiety, no depression.”

Grandon’s new found peace of mind was put to the test when a natural catastrophe hit his colony and the hives were destroyed in a flood.

“That was like losing everything. I mean, I had just found something to keep me on this side of the grass, and all of a sudden it was taken away from me. I guess it was like receiving a life-saving drug, you know, you start getting better and then all of a sudden they take the drug away.”

Through the aid of a mentor and his fellow bee watchers, Grandon received 20 new hives, new queens and was offered 360,000 new bees from a farm in Georgia.

“I was back on my high. I guess you could say I started receiving my therapy again. I couldn’t even explain how I felt when I found this out,” he says.

“People had no idea who I was, but they felt it was worthy, or I was worthy enough, I guess, to save.”

Grandon says that in beekeeping there is always something new to discover.

“Every time you open the box, it’s different, it’s a new beginning.”

(For the source of this, and many other equally interesting articles, please visit: https://www.bbcearth.com/blog/?article=the-man-whose-life-was-saved-by-honey-bees/)