For more than fifty years, scientists have thought that the origin of speech depended on one pivotal moment 200,000 years ago. That’s when the human larynx descended, elongating the vocal tract. Until now, this physiological innovation was seen as the root of humans’ unique ability to communicate verbally with one another. But a new paper suggests that estimate may be off — by a couple of million years.

The review — which includes decades-worth of human and animal studies and acoustic models — not only pegs the origin of speech far earlier. It disrupts traditional theories of human linguistics entirely.

Together, these findings suggest the dawn of speech goes back 20 million years ago — 100 times earlier than previously thought.

“Speech is a mythic characteristic, fundamental and unique to the human species,” Louis-Jean Boe researcher at the University of Grenoble, Alpes and lead author of the review, tells Inverse.

“Knowing the manner in which it came to us over the course of evolution is as important as knowing about the emergence of our species or origin of the world.”

The results were published recently in the journal Science Advances. 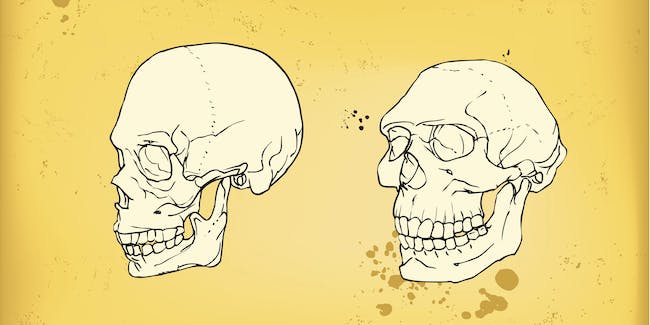 Humans aren’t as special as we think

Verbal language is unique and universal in humans, research shows. Other animals communicate in various ways, including vocal calls, but don’t show the structural complexity and flexibility of human language.

“Figuring out how speech and language came to us is figuring out how it is to be human,” Thomas Sawallis, researcher at the University of Alabama and study co-author, tells Inverse.

Speech and language have a clear and important distinction: Speech is how we make sounds and say words, while language is the words we speak to convey meaning.

Until now, most scientists hypothesized that speech emerged relatively recently, suddenly, and simultaneously. This gave rise to the laryngeal descent theory, which emerged in the late 1960s. The theory posits that some 200,000 years ago, human ancestors’ larynxes dropped, enabling their ability to make contrasting vowel sounds and so develop speech. This in turn enabled them to develop language. But the new study’s authors say other researchers have historically overlooked critical data from other species that can inform our understanding of humans.

But the new data suggest ancient humans had the building blocks of human speech, too, even if they never uttered a word.

The researchers combined past research with the latest studies on non-human primates to see if their findings informed scientific understanding of speech evolution. They also examined just how unique humans’ vocal roots are — or are not.

The team found that early hominid species likely produced contrasting vocal sounds without descended larynxes. Analyses of Neanderthal skulls revealed they had the same vowel-making capacity as modern humans, suggesting descended larynxes are not a prerequisite for phonetic ability. The researchers can’t say definitively whether Neanderthals spoke, but if they did, their speech ability wasn’t held back by larynx positioning.

More recent studies also reveal primates can make human-like contrasting vowel sounds . These non-human primates, or “old world monkeys”, like baboons, may not be able to speak as a human does, but they do exhibit foundational vocal expressions underlying human language.

Together, the findings turn the laryngeal descent theory on its head. They demonstrate that early human species could make contrasting vowel sounds — the basis for language — at least 20 million years ago. They also suggest that speech and language emerged over an extended period of time — not suddenly, as the theory had argued.

Debunking the larynx descent theory makes space for an infinite number of new theories and lines of questioning, the authors say. 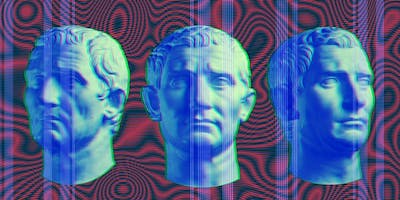 Is a long history of accumulated genetic mutations the reason the human face looks like it does? Seems that way.
Read More

More research will further illuminate the complicated roots and reasons humans communicate through speaking. But until more data is available, know this: Human language — a fundamental aspect of our species — may not be so special and unique after all.

Recent articles on primate articulatory abilities are revolutionary regarding speech emergence, a crucial aspect of language evolution, by revealing a human-like system of proto-vowels in nonhuman primates and implicitly through- out our hominid ancestry. This article presents both a schematic history and the state of the art in primate vocalization research and its importance for speech emergence. Recent speech research advances allow more incisive comparison of phylogeny and ontogeny and also an illuminating reinterpretation of vintage primate vocalization data. This review produces three major findings. First, even among primates, laryngeal descent is not uniquely human. Second, laryn- geal descent is not required to produce contrasting formant patterns in vocalizations. Third, living nonhuman primates produce vocalizations with contrasting formant patterns. Thus, evidence now overwhelmingly refutes the long- standing laryngeal descent theory, which pushes back “the dawn of speech” beyond ~200 ka ago to over ~20 Ma ago, a difference of two orders of magnitude.

(For the source of this, and many other equally interesting articles, please visit: https://www.inverse.com/article/61634-dawn-of-speech-earlier-than-we-thought/)