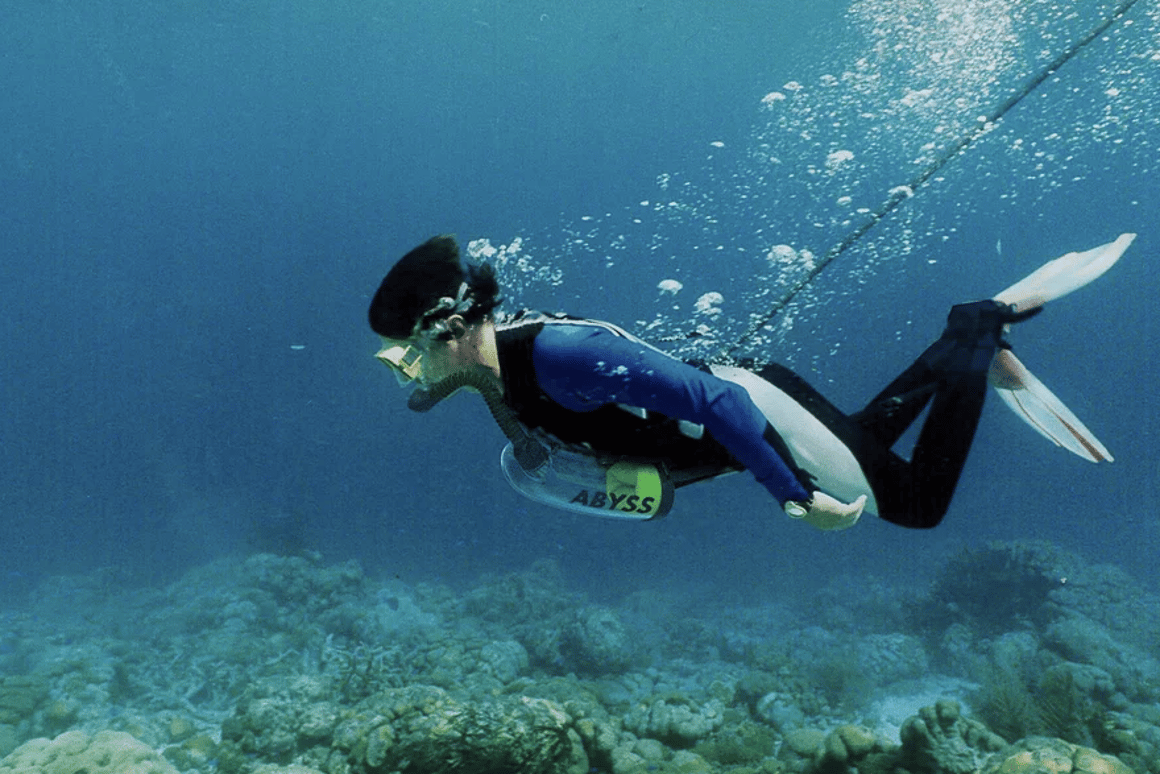 There’s a lot of ground between puttering around with your face strapped to a snorkel and managing the dangers, equipment, certification and expenses of scuba diving. Surface-supplied diving systems fill some of this space by strapping you to a breathing hose that plunges deeper than a snorkel but without some of the complications of scuba. Typically these systems rely on some form of compressed air, but a new prototype from Austria uses a more sustainable air supply: you. The ExoLung translates the diver’s swimming motions into air movement, keeping breathing air flowing so long as the diver keeps swimming.

Like other surface-supplied diving systems, the ExoLung has a buoy that floats on the surface of the water, serving both as a safety restraint and air intake. A hose connects the buoy with the water bell worn on the front of the torso. Inside the bell’s hardshell body, a collapsible water bladder is attached to leg straps that secure around the diver’s feet.

As the diver extends his or her legs, the straps pull the bladder, sucking in air as water is pushed out. Upon leg compression, the straps relax and water pressure fills the bladder back into the hardshell body, compressing the air for inhalation.

Other surface-supplied and portable breathing hardware that fills the gap between snorkelling and scuba diving is limited by the constraints of battery power or compressed air tanks. The Indiegogo-funded AirBuddy system advertises up to 45 minutes of lithium battery power, while the cylinder-supplied Scorkl breathing mask that hit crowdfunding around the same time in 2017 offers only 10 minutes.

By making the diver the power source, ExoLung designer Jörg Tragatschnig creates “endless” breathing, or, more accurately, an air supply that only cuts off when one stops swimming around. And when a diver stops swimming, it’ll presumably be because he or she has resurfaced.

The 16.4-feet (5-m) ExoLung hose prevents the diver from diving to dangerous depths that could present the risk of expending too much energy and being unable to get back to the surface with available air. It’s designed to still be long enough to immerse oneself within the underwater environment.

The entire ExoLung system weighs 7.7 lb (3.5 kg) and packs down into a 16 x 12 x 8-in (40 x 30 x 20-cm) package, making it much more portable than alternatives with heavy compressor equipment. The AirBuddy, also billed as ultra-lightweight, weighs in at nearly three times the ExoLung at 21 lb (9.5 kg). One could easily hike, bike or paddle the ExoLung to a dive spot.

The ExoLung does not require any certification, but Tragatschnig suggests users should at least familiarize themselves with basic compressed air diving concepts by taking an introductory diving course. In addition to exploring seas and inland water bodies, such as ExoLung’s local Lake Zell, the device could find use in pools for underwater fitness activities and as a practice apparatus for other forms of diving.

Without having tried it, we do wonder about how naturally the system breathes and how big the learning curve, plus we’ve learned to be highly skeptical of terms like “endless” and “unlimited.” Still, the ExoLung seems ingenious in its simplicity – a light, affordable alternative for exploring underwater.

The patent-pending ExoLung is still in the prototype phase, but Tragatschnig estimates a price of less than €300 (approx. US$335) for the basic version described above, suggesting a “pro” model with 23-foot (7-m) hose and reinforced construction could price in under €500 ($550). Unlike tank-based systems, the ExoLung doesn’t involve the additional cost of refilling and, outside of cleaning after use, is essentially maintenance-free. Tragatschnig is looking for commercial partners to bring his idea to market, and will be exhibiting at next month’s ISPO Munich sports show.

The 4.5-minute video below takes a closer look at the ExoLung package and use:

(For the source of this, and many other interesting articles, and to view all seven illustrations plus the video, please visit: https://newatlas.com/marine/exolung-underwater-diving-air-supply/)