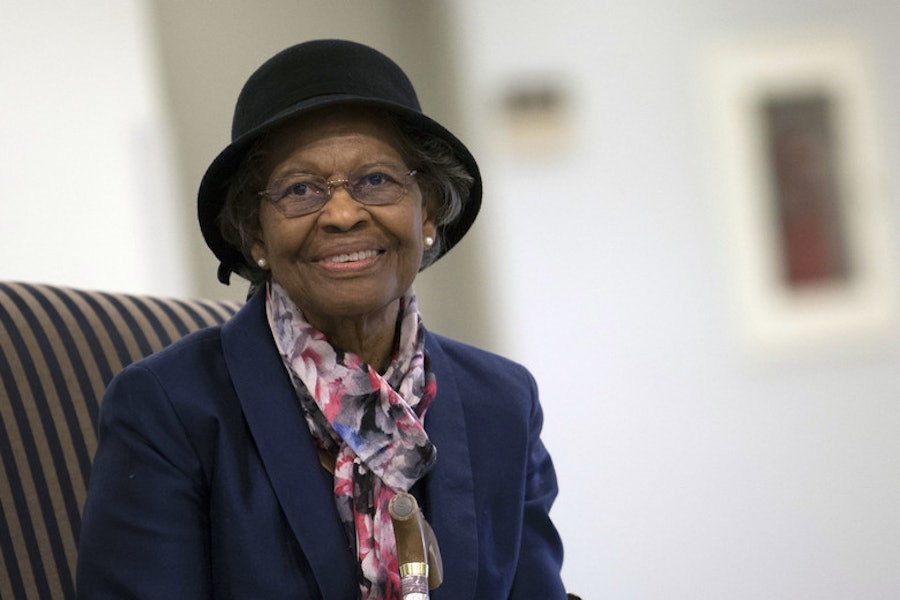 Gladys West is one of the reasons why you can receive driving directions from your phone or tag a photo location on Instagram.

Whether you are getting driving directions from your phone or tagging the location of an Instagram photo, the use of GPS (Global Positioning System) has become seamlessly integrated into our daily lives. But less ubiquitous is the knowledge that GPS got its start in the mind of an Air Force mathematician named Gladys West.

West was born in 1930 in Dinwiddie County Virginia, a rural community where her family had a small farm. There, surrounded by sharecroppers, farmers, and tobacco factory workers, she decided early on that staying and working in rural Virginia was not the future she pictured for herself. She considered education the key to her way off of the farm, and she worked hard to get top grades in all of her subjects in school. Although her family didn’t have the money to send her to college, her hard work paid off – she secured a scholarship to study at Virginia State University by graduating from her high school as valedictorian in 1948.

At first, she was a human computer, doing the math out longhand herself, but she then transitioned to programming computers, the machines.

West decided to major in mathematics at Virginia State University, where she was a member of the Alpha Kappa Alpha sorority. After graduating with her Bachelors degree, West taught science and math in Waverly, VA for two years before returning to VSU for her Masters degree in Mathematics, which she received in 1955. The following year, West was hired as a mathematician at the Naval Proving Ground in Dahlgren, VA, (now called the Naval Surface Warfare Center), where she analyzed satellite data. She was one of only four African American employees at the time.

At first, she was a human computer, doing the math out longhand herself, but she then transitioned to programming computers, the machines. Through the early 1960s, West worked on an astronomical study that proved the regularity of Pluto’s motion relative to Neptune i.e. for every two orbits Pluto makes, Neptune makes three, a phenomenon called “orbital resonance”. David Falkner, president of the Minnesota Astronomical Society explained: “Pluto’s orbit is very eccentric, or oval-shaped, such that it goes inside of Neptune’s orbit for about 20 years of its 248 year orbit. Although the two orbits don’t actually intersect, the potential of both planets being that close to each other could result in their mutual gravitational forces affecting each other and causing them to change their orbits. However, because of their 2:3 resonance, Neptune and Pluto are never closer than 17 AU (Astronomical Unit = ~93 million miles). As a result, this 2:3 resonance is very stable and has lasted for millions of years.”). Following this, she joined the Seasat radar altimetry project as project manager.

Before the Seasat project, the precise measurement of distances over the Earth’s surface, or between Earth and an object like an airplane, was nearly impossible. That’s because the Earth is not a perfect sphere, making the calculation of these distances challenging. The oceans play a large role in determining the irregularities in the shape of the planet, so understanding the variation in sea level was an important step in modeling the shape of the planet. Seasat was the first satellite that could remotely sense oceans, using radar to measure the distance between the satellite and the surface of Earth’s oceans. West used the information from Seasat and other satellites to refine over the years an increasingly detailed and accurate mathematical model of the actual shape of the earth – called a “geoid”. This computational modeling would prove essential to modern GPS, as the technology relies on this mathematical model in order to determine the position of a receiver.

West retired in 1998, after 42 years at Dahlgren, but didn’t slow down – despite suffering a stroke only five months after retiring. She worked on rebuilding her strength and recovering her lost mobility by taking classes at a local YMCA with her husband, motivated by a big goal: to finish her remote PhD program in Public Administration, which she received from Virginia Tech in 2018.

Yet despite her achievements and long career with the military, her role in the development of GPS technology remained unappreciated until she submitted a short biography for an event thrown to honor members of the Alpha Kappa Alpha sorority. Her biography included a short line about how she had been part of the team that developed GPS, and caught the eye of one of her sorority sisters – who was determined to help West share her story. In early 2018, West’s story was covered by the Associated Press, and then she was officially recognized by the United States Military in a press release issued by the Air Force Space Command, which celebrated her as a ‘hidden figure’ of military history. In February 2018, West was commended by the Virginia State Senate, and on December 6, she was inducted into the Air Force Space and Missile Pioneers Hall of Fame in a ceremony at the Pentagon.

Still a mathematician to her core, to this day West prefers using a paper map and making her own calculations rather than using the GPS technology that she helped develop.

(For the source of this, and many other equally interesting and important articles, please visit: https://massivesci.com/articles/science-heroes-gps-hidden-figures-scientist-women-physics-math/)