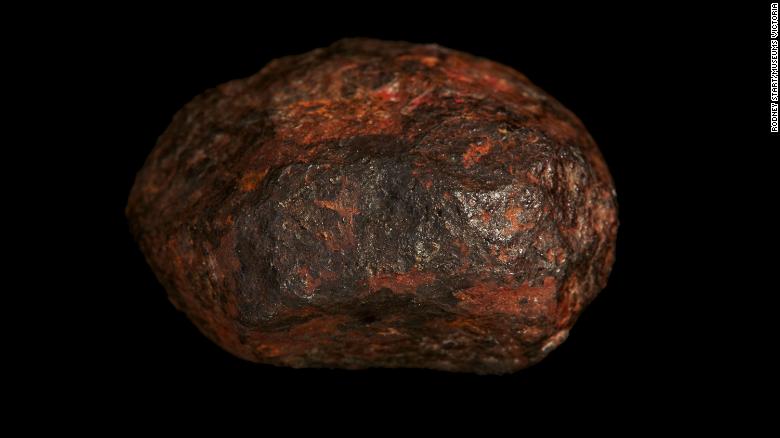 The Wedderburn meteorite contains edscottite, which occurs in iron smelting. But it has never occurred in nature until now, when researchers sliced the meteorite open and found it hidden there.

Between 2015 and 2019, researchers discovered 31 new carbon minerals, most of them vividly colorful. Edscottite is one of the least flashy new finds, but it’s also the one that’s set geologists abuzz.

Edscottite is one of the phases iron goes through when it’s cooling down from a high temperature, as it’s smelted into steel. But the edscottite discovered in a tiny meteorite and officially named this year is the first to occur in nature.

The Wedderburn meteorite’s been sitting in Museums Victoria in Australia since it was found nearby in 1951, and researchers have sliced it open to search its contents just as long.

“We have discovered 500,000 to 600,000 minerals in the lab, but fewer than 6,000 that nature’s done itself,” Stuart Mills, Museums Victoria’s senior curator of geosciences, told Melbourne newspaper The Age.
–
It’s named for Ed R.D. Scott, a cosmochemist at the University of Hawaii at Manoa and pioneering meteorite researcher. He first identified the unique iron carbide in 1971 while studying the meteorite, but technology hadn’t advanced far enough for him to characterize its structure.
–

Researchers Chi Ma of Caltech and Alan Rubin at UCLA examined a slab of the meteorite and were surprised to find edscottite under an electron microscope.

Just how it formed is still unclear. Geoffrey Bonning, a planetary scientist at the Australian National University who was not involved with the study, speculated to The Age that it was blasted out of the core of another planet.

The hypothetical planet, he said, formed when asteroids clumped into one big planet. The planet heated up during its formation, and hot metal dripped into its core.

“This meteorite had an abundance of carbon in it. And as it slowly cooled down, the iron and carbon came together and formed this mineral,” Mills said.

Eventually, the planet might’ve been struck by another astronomical body and destroyed, flinging the debris across the solar system.

Some of the debris, Bonning posited, became the Wedderburn meteorite. The edscottite might’ve been created when all that metal heated up in the former planet.

(For the source of this, and other equally interesting articles, please visit: https://www.cnn.com/2019/12/26/world/new-mineral-discovered-edscottite-scn-trnd/)