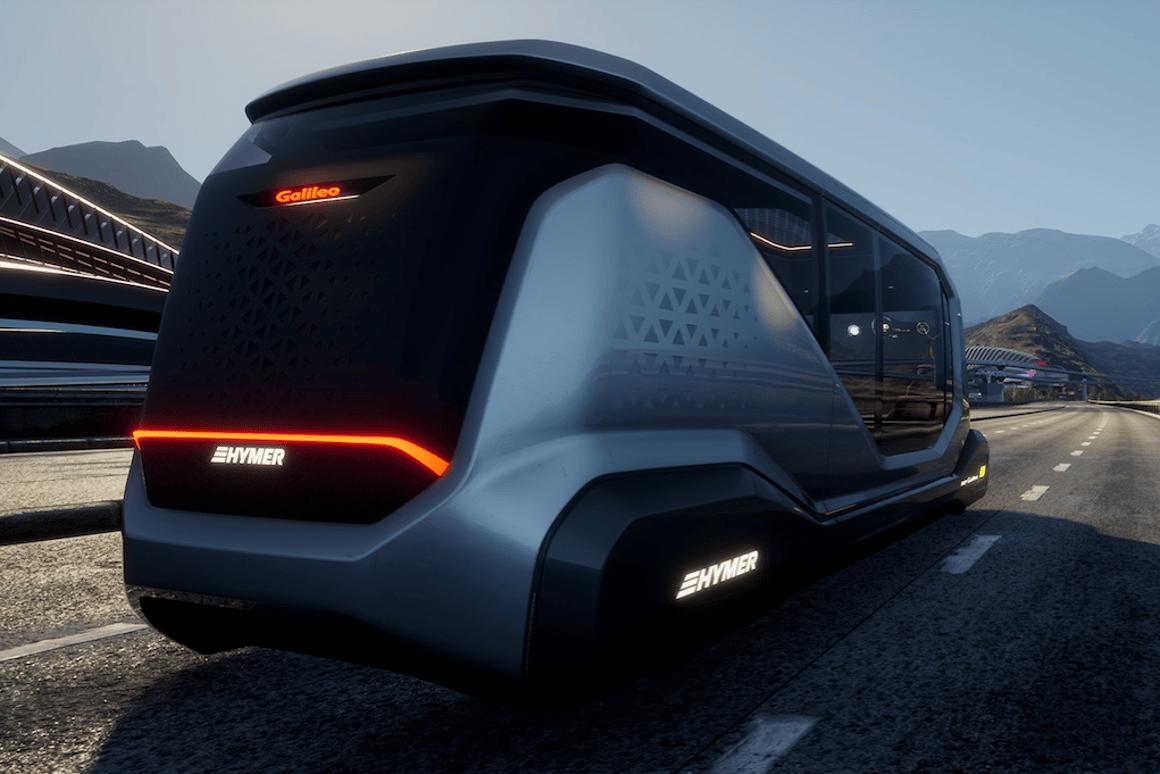 The RV world reached new heights in the 2010s, laying the groundwork for what could be an even bigger decade to come. Not only did the camper industry rebound authoritatively from the 2008 recession, it rose steadily to an all-time US sales record in 2017 and decade+ European high mark in 2018. The RV renaissance of the 10s also saw the romanticization of the mobile living lifestyle, with terms like “van life,” “overlanding,” “glamping” and “digital nomad” gaining an aspirational mystique and a place in the vernacular. As we move into the new decade, RVs are set to continuously evolve, the forward-looking concepts of the past 10 years paving the way for smarter, more comfortable, more luxurious and more stylish RVs of every style and size.

The concept: Volkswagen’s 2017 ID. Buzz wasn’t actually a proper camper van concept, but VW definitely foreshadowed its electrified camper future with rearrangeable, floor rail-mounted furniture, flat-folding seats, a removable console table, swivel cab seating and a wood floor. And a decentralized 270-mile (435-km) AWD powertrain and floor-mounted battery pack carved out a roomy interior that camper conversion shops the world over were no doubt itching to get their hands on.

The future: The addition of electric powertrain technology is the most anticipated shift the RV industry approaches. Not only will the switchover from gas to electric keep green camping spaces cleaner and quieter, it’ll offer some advantages quite unique to motorhome design, such as the open interior space and flexibility previewed by the ID. Buzz and the ability to run appliances and accessories off a single vehicle battery pack. All-electric camping is coming slowly but surely, and 2019 saw the launch of the world’s first electric Class C motorhome, along with a mass-produced plug-in hybrid camper van. Oh, and this little electric pickup camper got some attention as well. As for the ID. Buzz, other electric vans will beat it to market, but only Volkswagen’s van will be the 21st century version of the Microbus beloved the world over as the very embodiment of motor vehicle escapism. Rollout begins in 2022.

Moving toward self sufficiency

The concept: With the Sonic X concept, KZ Recreational Vehicles and parent company Thor Industries managed to inject a number of fast-growing trends into a single trailer that looked ready for the road the day it debuted. The 26-foot (7.9-m) concept trailer had its eye on off-grid self-sufficiency, relying on 1,000 amp-hours of lithium batteries, 1,000 watts of solar, 379 liters of water, and a water extraction and filtration system to live comfortably, whether just outside city limits or hundreds of miles away from the nearest slab of concrete. Multiple bike/gear-carry systems were there to ensure campers never experienced a dull moment.

The future: Increased battery power won’t only benefit RV powertrains; lithium batteries have been steadily finding their way onto camping trailer and motorhome options lists and standard equipment packages, where they can handle some or even all of the energy needs of onboard appliances and amenities. Expect to see the RV market continue to shift more and more of the workload to solar-assisted battery systems. While the production Sonic X isn’t nearly the off-grid powerhouse the concept was, 2019 did see the debut of a production-ready gas-free, all-electric caravan with even more lithium and solar power than the Sonic X concept. On a separate note, the Sonic X’s carbon fiber construction is an example of the increasing use of composites to save weight and improve fuel economy, a trend that’s already underway in both motorhome and trailer design.

The concept: Helipads and foredeck hot tubs are amenities usually reserved for superyachts, but the good folks at luxury mobile component supplier Furrion brought them to the 45-foot (13.7-m) Elysium motorhome concept that debuted at CES 2017. Taking glamping to new heights, Furrion turned the Class A motorhome roof – usually a wasteland of air conditioners, skylights and solar panels – into the Elysium’s pièce de résistance, a yacht-like deck with a hot tub, sun pads, and a height-adjustable landing pad tailor-fit to a Robinson R22 helicopter. The cabin below was equally impressive thanks to its chef’s kitchen, triple 75-in HDTV spread, fireplace and smart bathroom.

The future: Glamping has grown from a small trend to a market-shaping force that is changing the nature of camping. In fact, market research and consulting firm Grand View Research expects it to grow into a $5 billion global market by the mid-2020s. So while the heli-ferrying extravagance shown on the Elysium might go above and beyond the motorhomes of today (mere supercar garages … pfft), glamping preferences will push camping vehicles closer to that level of opulence. At the end of the day, who doesn’t want to leap from a nine-figure explorer yacht to a seven-figure motorhome with chopper speed and precision?

Lending hope to the hopelessly unstylish

The Caravisio concept at the 2013 Dusseldorf Caravan Salon

The concept: For too long, large camping trailers have failed to evolve aesthetics carried over from sometime around 1974, clunking behind the bumper as bulky, heavy and downright ugly boxes of unsophistication. In 2013, Knaus Tabbert disrupted that trailer status quo with the Caravisio concept, showing it is both possible and preferable to give the outdated travel trailer a complete 21st century makeover. Using solutions like a V-shaped front bed and covered wheels, Knaus created a sleeker, more aerodynamic design language that would feel at home behind the most luxurious ultra-premium SUV or sedan. Impressive amenities like the fold-out rear yacht deck and electro-chromatic glass doors/movie projection screen teamed to create a living space every bit as modern and stylish as the pretty outer shell.

The future: Six and a half years later, camping trailers are still more likely to look like cargo containers than Caravisios, but offerings like the Hobby Premium and Adria Astella are prodding the European industry in a more stylish direction. The search for improved efficiency should also lead to more streamlined designs. Even the US RV industry, long loyal to the hulking, unstyled box, is starting to embrace evolution and technological advancement, setting the table for a new generation of sleek, smart, luxurious large trailers.

BASF’s Chromacool tech means the Hymer VisionVenture can stay cool, no matter what color it is.  Erwin Hymer Group

The concept: Easily the camper van of 2019, the Hymer VisionVenture brought together off-grid exploratory capabilities and comfortable, elegant living better than any other vessel priced below a Dynamiq Global 330 yacht. Elevated features like the open-air deck, convertible bathroom and staircase-accessed second story found home on a rugged Mercedes Sprinter 4×4 base with improved ramp angles, underbody protection and all-terrain tires.

The future: Glamping is one thing, but glamping on barren dirt with no electrical or water hookups is quite another. Like glamping, though, overlanding was one of the hottest trends to emerge in outdoor recreation this past decade, and we expect the popularity of those two trends, along with #vanlife, to result in more vans with the VisionVenture’s blend of ruggedized chassis/exterior and cozy, upmarket interior. It’s already possible to enjoy off-grid glamping experiences in larger truck-based expedition campers, like those from Bliss Mobil, and that camping luxury should continue to trickle down to 4×4 van size.

The concept: Going green is more than just wiring a lithium battery pack to a roof mounted solar panel – or it should be. The designers of the sCarabane trailer threw the entire kitchen sink in to provide a more comprehensive means of repurposing natural energy and resources. The folding caravan rotated to track the sun for more effective solar charging and water heating, made purposeful use of natural light, and even harnessed wind power.

The future: A 26-foot (7.9-m), 5,500-lb (2,500-kg) folding travel trailer/tiny lodge may not be the breakout camper product of the 2020s, but in pushing toward fully self-sufficient campers, manufacturers should look for smart, viable solutions beyond merely screwing solar panels to the roof. The sCarabane provides a nice starting point, and we expect to see more camping vehicles incorporate features like solar tracking, multi-source energy harvesting and rainwater collection. This will, in turn, allow trailers to live off the grid more comfortably, for longer periods of time and with less impact on the surrounding environment (e.g. no gas generator noise or emissions). Trailers that double or triple their size at camp represent another trend that shows no signs of slowing.

The concept: Before officially launching some of the world’s most advanced wheeled smart homes with partner motorhome manufacturers, Mercedes-Benz previewed the more distant future with the 2018 Concept Marco Polo. The midsize pop-up van showed how voice control could take smart motorhome convenience well beyond current-generation touchscreen and mobile device tech. Utter a command as simple as, “Hey Mercedes, I want to relax,” and the van sets itself up, popping the roof, leveling the suspension and deploying the awning. For added style, it uses adjustable glass tinting in place of stodgy, old window shades.

The future: Mercedes already offers “Hey Mercedes” voice commands for driver cab features, so it should only be a matter of time before voice finds its way to the rear of camper vans and larger motorhomes. When it does, the vehicle vacation becomes even more relaxed, making camp set-up and breakdown as easy as speaking a few words. Smart home technology certainly won’t be exclusive to Mercedes-based campers and will continue making its way into vans, large motorhomes and trailers around the world.

–
(For the source of this, and many other equally interesting articles, and to view all 44 images associated with this article, please visit: https://newatlas.com/outdoors/camper-concepts-preview-rv-life-2020s/)
Tweet