Home
News
&
WEIRD SCIENCE
Is the world running out of fresh water?

Increasing temperatures and populations threaten a precious element and pose a serious problem. What can we do about protecting our most vital resource?

Given that 70% of the Earth’s surface is water, and that volume remains constant (at 1,386,000,000 cubic kilometres), how is a water shortage even possible? Well, 97.5% is seawater unfit for human consumption. And both populations and temperatures are ever-rising, meaning that the freshwater we do have is under severe pressure.

Water demand globally is projected to increase by 55% between 2000 and 2050. Much of the demand is driven by agriculture, which accounts for 70% of global freshwater use, and food production will need to grow by 69% by 2035 to feed the growing population. Water withdrawal for energy, used for cooling power stations, is also expected to increase by over 20%. In other words, the near future presents one big freshwater drain after the next.

What’s more? Right now, according to a NASA-led study, many of the world’s freshwater sources are being drained faster than they are being replenished. 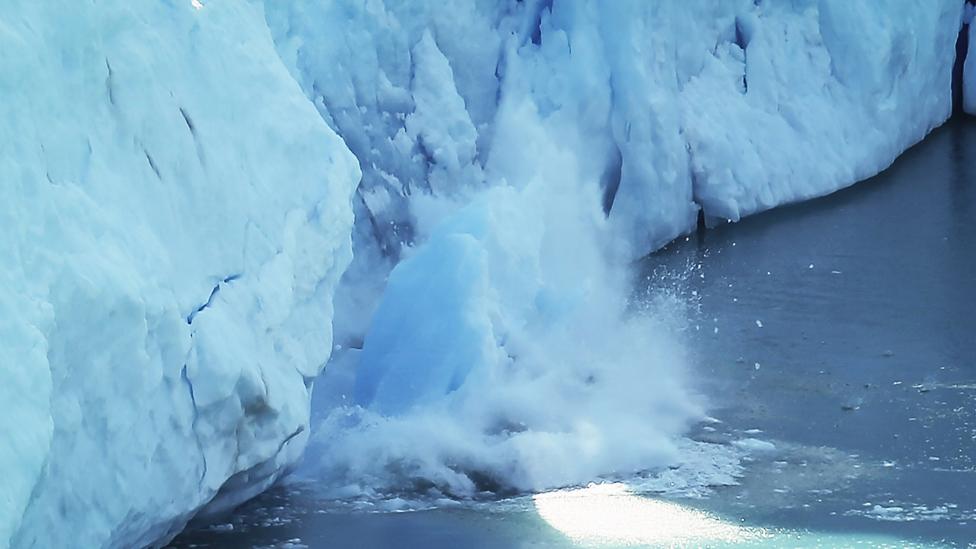 Earth’s glaciers and ice caps lock away over 68% of its freshwater supply, but scientists believe climate change accounts for their recent, rapid melting (Credit: Getty Images)

Of the world’s major aquifers (gravel and sand-filled underground reservoirs), 21 out of 37 are receding, from India and China to the United States and France. The Ganges Basin in India is depleting, due to population and irrigation demands, by an estimated 6.31 centimeters every year. Jay Famiglietti, senior water scientist at NASA, has warned that “the water table is dropping all over the world. There’s not an infinite supply of water.”

Meanwhile, México City, built on ancient lake beds, is now sinking in some areas at a rate of nine inches a year. As the city draws on the aquifer below, the effect is like drinking a milkshake through a straw. Once horizontal streets now undulate like BMX tracks. The city imports 40% of its water, and Ramón Aguirre Díaz, director of the Water System of México City, has blamed “heavier, more intense rains, which mean more floods, but also more and longer droughts.”

Much of the same is happening in California. From 2011 to 2016, the state suffered its worst drought in 1,200 years. Its major aquifers receded at a combined rate of 16 million acre-feet per year, and roughly 1,900 wells ran dry. Then, in the first three months of 2017, rain fell at 228% more than its normal level, thanks to climate change, scientists say. Lake Oroville in the northern part of the state swung from being at 41% of capacity to 101% in just two months, causing dams to be overwhelmed and 188,000 local residents to be evacuated.

Yet even when a drought ends as spectacularly as California’s, the aquifers below aren’t suddenly refilled. According to NASA’s Famiglietti, it would take four years of above-average rainfall in California for that to happen. And even then, “California will still be losing water [because the] state simply does not have enough water to do all the things that it wants to do.”

But what else could all this mean, beyond the fact that our freshwater supply could soon be very strapped?

Some hypothesize that increased water shortages around the world will lead to wars. The current Syrian civil war has been cited by many, including Dr Peter Engelke, senior Fellow at Washington-based think tank Atlantic Council, as a recent example. “Between 2007 and 2010, Syria experienced one of the worst droughts in recorded history, the effect of which was to decimate rural communities and drive hundreds of thousands off the land and into Syria’s cities, where they were marginalized,” he says.

Anders Berntell, executive director of 2030 Water Resources Group, a multi-sector water resources body, also suggests a link to Boko Haram and Al-Shabaab, whereby young people “realize that, as a result of the lack of natural resources, degraded land and lack of water there are no livelihood opportunities… There is no future for them. They become easily targeted.” They are more easily radicalized.

All of which would predict a bleak future – but some nations have worked out solutions. And they’re impressive ones that the rest of the world can learn from.

For example, Australia survived its “Millennium Drought” from 1997 to 2009 by rapidly implementing measures that halved business and residential water use.

“Australia is the gold standard,” says Richard Damania, global lead economist in the World Bank’s Water Practice, and formerly of the University of Adelaide. The key was putting a price on water and making it a tradable commodity.

“[Suppose] I had water, but I’m only growing wheat. Whereas you’re growing grapes or something of higher value [than wheat, but don’t have water]” he explains. “Then I can sell you that water instead of irrigating my lower value crop. This way… Australia survived the Millennium Drought extraordinarily well.”

Another ‘gold standard’ is Israel, which views water availability as a national security issue.

By recycling effluent water, including household sewage, the Shafdan Wastewater Treatment Facility near Tel Aviv supplies approximately 140,000,000 cubic metres of water per year for agricultural use, covering 50,000 acres of irrigated land. Over 40% of Israel’s agricultural water needs are now supplied by effluent water. The waste sludge is also sent to an anaerobic digestion plant, which uses the methane as a fuel to produce renewable energy.

“If Israel can do it,” says Anders Berntell, executive director of 2030 Water Resources Group, a multi-sector water resources group, “a country located in a desert, it proves that with the right technology, economic resources and political determination, you can make it happen.”

Even more mind-blowing? Israel’s water treatment systems recapture 86% of the water that goes down the drain – the next-best performer, Spain, recycles just 19%.

So can the world simply desalinate its way out of the freshwater crisis? It’s unlikely, says Damiane: “On average it’s about five to seven times more expensive. The energy footprint is huge, and you’ve got to do something with the salt. If you look at aerial images around the coasts of Kuwait and Dubai [areas that are highly reliant on desalination] you’ll see the havoc that is caused to marine ecosystems.” Given the costs, both economic and ecologic, “it is only a boutique solution in very rich places”, he says.

Coca-Cola say it uses desalination at around 30 coastal plants. But Greg Koch, whose title at Coca-Cola is senior director of Global Water Stewardship, explains: “We don’t see for us, nor for most places in the world, desalinization as a solution… the capital costs are going to be higher than a treatment plant to treat freshwater.” One tactic the company uses is, where it uses desalination currently, dumping the brine out at sea via “pipes that take it away from nearshore areas”.

A simpler and cheaper solution is rainwater capture. It’s an old idea whose time may have come: Beneath Istanbul, Turkey, the Basilica Cistern built by Caesar Justinian (A.D. 527 – 565) can hold 80,000 cubic meters of rainwater. One and a half millennia on, many cities are now emulating it.

Melbourne’s largest stormwater harvesting tank can store four million liters of partially treated water. Authorities including Kerala, Bermuda and the US Virgin Islands require all new buildings to incorporate rainwater harvesting, while Singapore meets up to 30% of its water needs through rainwater capture.

Even in Manchester, England, where it rains on average 12 days every month, efforts are being made to capture the rain. 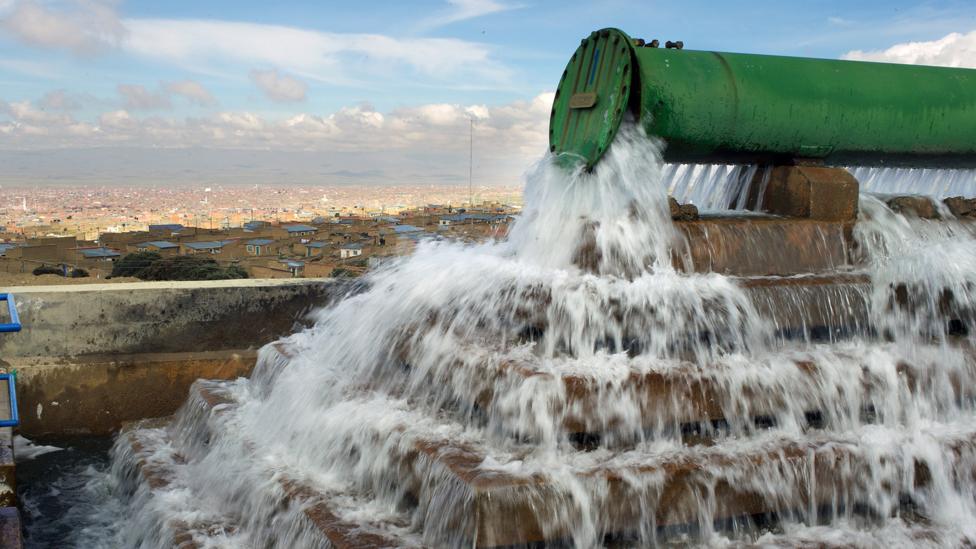 Water treatment plants, like this one in Bolivia, depend on rainfall and freshwater from glaciers – both of which are threatened by climate change (Credit: Getty Images)

Manchester Metropolitan University’s Birley Campus, built in 2014 to house some 6,500 students and staff, aims to be entirely water self-sufficient through rainwater capture, waste water recycling, and a borehole into the sandstone aquifer below.

Rainwater is collected in a 20,000 liter tank below the building and is used for showering and toilet flushing. John Hindley, the university’s assistant director of estates, explains: “This is about the sustainable use of resources. In October we had storms that led to a lot of flooding; the University was flooded in several different buildings. These [events] aren’t just one-offs anymore, so having more sustainable systems not just in consumption, but slowing down run-off, capturing it, taking pressure off the system… is becoming of increasing importance to the university and to businesses in the city.” The Birley Campus water bill is 60% lower than if using water from mains.

Due to cost pressures, business could be an even greater driver of water efficiency than governments. Anders Berntell believes that “many of the big multinational companies are way ahead of governments when it comes to understanding and acting on the challenges that we are facing.” At Coca-Cola, Koch agrees there is “a vested interest. We just opened a $100m (£79m) plant in Phnom Penh in Cambodia, a $60m (£48m) plant in Bangladesh – we want those plants to be there for decades and serve a contiguous marketplace, so we have to act.” This has included installing the latest drip irrigation techniques in farms that share the same aquifers as Coca-Cola, irrespective of whether they are direct suppliers.

“In most places around the world the [agriculture] irrigation techniques are pretty inefficient,” says Engelke. “Very efficient irrigation techniques do exist. Thermal power sources [nuclear, coal, natural gas] require vast amounts of water for cooling. Renewables for the most part – solar and wind – do not. It all has to do with policies to encourage, incentivize, and invest.”

“If we want to become water-efficient societies, there are ways in which we can do it,” concludes Engelke. “Either through increasing the efficiency with which every drop of water is used, or simply shifting away from water-intensive uses altogether.”

Whichever effective model of conserving freshwater we come up with, we need to come up with one – and sooner rather than later.

If you liked this story, sign up for the weekly bbc.com features newsletter, called “If You Only Read 6 Things This Week”. A handpicked selection of stories from BBC Future, Earth, Culture, Capital, and Travel, delivered to your inbox every Friday.

(For the source of this, and many other equally important articles, please visit: https://www.bbc.com/future/article/20170412-is-the-world-running-out-of-fresh-water/)