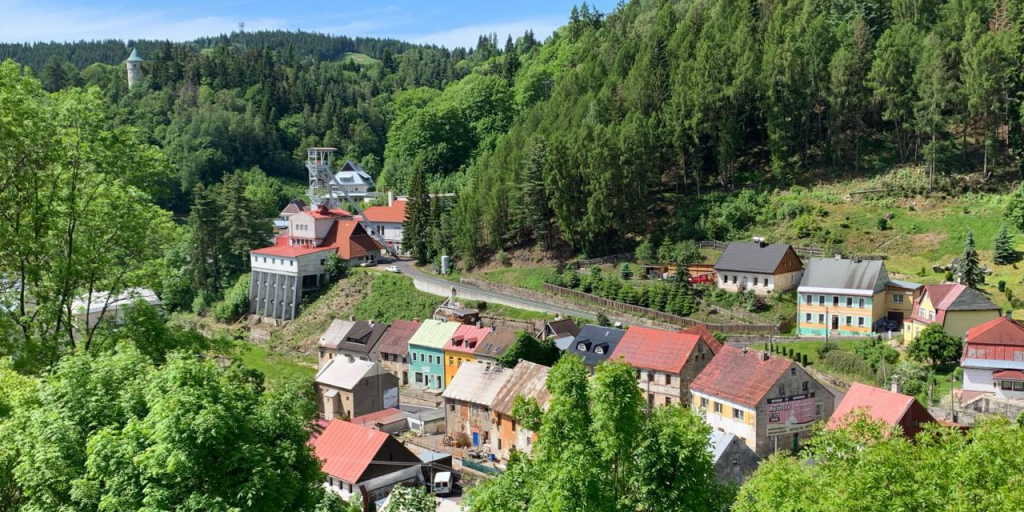 Five hundred years after coining the first dollar, a tiny mining town is coming to grips with the many ways it shaped the modern world.

The US dollar is the most widely used currency in the world. It is both the primary de facto global tender and the world’s unofficial gold standard. According to the International Monetary Fund, 62% of the planet’s financial reserves are held in US dollars – more than double the total foreign holdings of euros, yen and renminbi combined. Thirty-one nations have either adopted it as their official currency or named their money after it; more than 66 countries peg the value of their currencies to it; and it’s now accepted in places as far-flung as North Korea, Siberia and research stations on the North Pole.

Yet, one place where the dollar is not accepted is in the tiny Czech town of Jáchymov ­– which is ironic, because it was here, tucked deep into the wooded folds of Bohemia’s Krušné hory mountains, where the dollar originated 500 years ago in January 1520. But as I pulled a George Washington one-dollar bill from my wallet in Jáchymov’s 16th-Century Royal Mint House museum, the very spot where the dollar’s earliest ancestors were coined, docent Jan Francovič smiled and stopped me.

–
“I haven’t seen one of these in a long time,” he said, calling over two colleagues. “In Jáchymov, we only accept koruna, euros or sometimes Russian rubles. You’re the first American to come here in more than three years.”

Welcome to Jáchymov: a sleepy 2,700-person town near the Czech-German border that’s both the home of the dollar and the home of no dollars. Chances are you’ve never heard of the place. You probably didn’t know that it was just named one of Unesco’s newest World Heritage sites. And you likely never realised that the currency that powers the free world originated in this one-road town, still reeling from the collapse of communism, that has more brothels than banks.

In fact, you could spend a day walking up and down Jáchymov’s main drag, past its abandoned Gothic and Renaissance buildings that tumble down the hill, around its opulent cluster of day spas at the base of the valley and up to its 16th-Century castle, and never realize it was the birthplace of the dollar.

“How could you? There are no signs advertising it anywhere – most people living here don’t even know!” said Michal Urban, director of the non-profit development Mountain Region Krušné hory – Erzgebirge and one of the authors of the region’s Unesco nomination, as he led me down a dark staircase and into the mint’s vaulted basement where the coins were assayed. “No other mining town in the world has had such a big influence as Jáchymov, but we’ve forgotten our history.”

You may also be interested in:
• The top-secret meeting that helped win D-Day
• The city that launched the publishing industry
• The buried secrets of the deadliest location on Earth

Long before Jáchymov existed, the rolling mountains separating modern-day Bohemia and Saxony were ruled by wolves and bears who roamed its virgin forests. When vast quantities of silver were discovered in 1516, enterprising local nobleman Count Hieronymus Schlick christened the area Joachimsthal (“Joachim’s valley”) after Jesus’ grandfather, the local patron saint of miners.

“At the time, Europe was a continent of city-states with local rulers vying for power,” explained local historian Jaroslav Ochec. “With no standard monetary unit among them, one of the most effective ways rulers could assert their control was to mint their own currency, and that’s what Schlick did.”

While the first thaler had an image of Joachim and the Bohemian lion, subsequent versions paid homage to ruling kings (Credit: Eliot Stein)

The governing Bohemian Diet officially granted Schlick permission to mint his silver coins on 9 January 1520. The count stamped an image of Joachim on the front, the Bohemian lion on the back, and named his new currency “Joachimsthalers” – which soon became shortened to “thalers”.

In an age when the metal content of coins was the sole determinant of value, Schlick did two smart things to ensure the thalers’ spread and survival. First, he made the thaler the same weight and diameter as the 29.2g Guldengroschen coin used throughout much of central Europe, which made it easier for neighboring kingdoms to accept it. More importantly, he minted more coins than the world had ever seen.

In just 10 years, Joachimsthal transformed from a 1,050-person hamlet to the largest mining center in Europe – a bustling 18,000-person hub with 1,000 silver mines employing 8,000 miners. By 1533, Joachimsthal was the second-largest city in Bohemia after Prague, and by the mid-16th Century, Urban estimated that some 12 million thalers minted from these mountains had spread across Europe – far more than any other currency on the continent.

The 2,700-person town of Jáchymov was once the second-biggest city in Bohemia after Prague (Credit: Eliot Stein)

Joachimsthal’s silver deposits soon ran dry, but by 1566, the thaler was so well known across Europe that when the Holy Roman Empire sought to establish a standard size and silver content for the many local currencies in its kingdom, it chose the thaler, calling all acceptable silver coins “Reichsthalers” (“thalers of the empire”).

“For the next 300 years, many countries around the world modeled their money after the thaler,” Urban said, staring across Jáchymov’s rusted metal roofs towards the hulking white shaft of Europe’s oldest continuously operated mine and the Schlick castle, which both still loom over the town. “Soon, the thaler started to live a life of its own far from here.”

The hulking Svornost mine shaft, the oldest continuously operated mine in Europe, still looms over Jáchymov (Credit: Eliot Stein)

As rulers across Europe began remodeling their coins after the thaler, they also renamed them in their own languages. In Denmark, Norway and Sweden, the thaler became known as the “daler”. In Iceland, it was the “dalur”. Italy had the “tallero”, not to be confused with the “talar” (Poland), the “tàliro” (Greece) or the “tallér” (Hungary). In France, it was “jocandale”, and “before long, there were some 1,500 imitations circulating among the tiny, tightly packed statelets of the Holy Roman Empire,” writes Jason Goodwin in his book Greenback: The Almighty Dollar and the Invention of America.

The thaler soon spread to Africa where it was used in Ethiopia, Kenya, Mozambique and Tanzania as late as the 1940s – and across much of the Arab Peninsula and into India, where it was still in circulation through the 20th Century. The official currency of Slovenia was the “tolar” until 2007. The money in Samoa is still called “tālā”. And the currencies in Romania (“leu”), Bulgaria (“lev”) and Moldovia (“leu”) today all take their names from the lion stamped on the first thaler 500 years ago.

The dark, vaulted basement below the Royal Mint House is where the first thalers were assayed (Credit: Eliot Stein)

But it was the Dutch leeuwendaler (“lion dollar”, or “daler” for short – pronounced nearly identically to the English “dollar”) that gave the US currency its name. After first arriving in New Amsterdam in the 17th Century with Dutch colonists, the dalers quickly spread throughout the Thirteen Colonies and English-speaking settlers began calling them – and all similarly weighted silver coins, including the widely used Spanish real de a ocho (“piece-of-eight”) coin – “dollars”. The dollar became the US’ official currency in 1792 and ever since, the thaler-inspired dollar has continued its march across the globe to places like Australia, Namibia, Singapore and Fiji.

Yet, as Urban and Ochec led me out of the mint and past a barbed-wire fence holding a military lookout tower on a nearby hillside, I learned that the mines of Jáchymov also have a much darker claim to fame.

When the town’s shiny silver deposits dwindled, miners began to encounter a mysterious pitch-black substance that led to an alarmingly high incidence of fatal lung diseases. They called the uraninite mineral “Pechblende” (“pech” means “bad luck” in German). While sifting through the town’s mines in 1898, a physicist named Marie Curie identified that the same ore that had produced the first dollars contained two new radioactive elements: radium and polonium. The discovery disfigured Curie’s hands, eventually killed her and led her to become the first woman to win a Nobel Prize. But it also set the stage for the town’s unlikely second act: the same mines that coined the world’s currency would now power the nuclear arms race.

For the next several decades, the town’s reopened silver mines became the world’s foremost source of radium. The Nazis experimented with a nuclear reactor here. The “father of the atomic bomb”, J Robert Oppenheimer, wrote his thesis on Joachimsthal’s uranium-rich shafts. And after Czechoslovakia reclaimed Joachimsthal from Germany after World War Two – renaming it Jáchymov and expelling the German-speaking population that had lived here for centuries with Czech settlers – the government signed a secret treaty with Stalin that turned the town into a Russian gulag.

“This began a very doomed period of our history,” said Urban, crunching through the woods along the newly opened 8.5km Jáchymov Hell trail that traces the valley’s development from silver mining hub to Soviet concentration camp. “Before the war, the people who lived here were very proud of creating the dollar. But when the population changed, this memory was lost and the mines became exploited to help Russia create the A-bomb.”

After Oppenheimer’s atomic bomb effectively ended World War Two, some 50,000 Soviet political prisoners were sent to Jáchymov between 1949 and 1964 to dig, crush and load uranium to fuel the USSR’s atomic arsenal. In fact, arguably the two most potent symbols of power in the modern world, the dollar and nuclear weapons, come from this quaint mining town in the Bohemian hills.

Today, Jáchymov is still grappling with its tumultuous past. The vast slagheaps that once scarred the valley are starting to be swallowed by evergreen trees. The rows of boarded-up 19th-Century homes built with toxic levels of uranium residue are slowly being gutted and restored to their former glory. And Jáchymov’s last operational mine, Svornost, which supplied silver for the very first dollars, now pumps radioactive water to a trio of eerie, lavish resorts advertising “radon-water therapy.”

There are still no signs anywhere in Jáchymov stating its rightful claim as the birthplace of the dollar. But if you head inside the town’s Royal Mint House museum and ask the docents to show you what’s new for this year’s quincentenary, they’ll proudly point behind the desk and show you a small frame holding a crisp new George Washington.

Places That Changed the World is a BBC Travel series looking into how a destination has made a significant impact on the entire planet.

(For the source of this, and many other equally interesting articles, please visit: http://www.bbc.com/travel/story/20200107-welcome-to-jchymov-the-czech-town-that-invented-the-dollar/)