By Kenya Evelyn in New York

A million seabirds died in less than a year as a result of a giant “blob” of hot ocean, according to new research.

A study released by the University of Washington found the birds, called common murres, probably died of starvation between the summer of 2015 and the spring of 2016.

Most dead seabirds never wash ashore, so while 62,000 dead or dying murres were found along the coasts of Alaska, Washington, Oregon and California, researchers estimate the total number is closer to 1 million.

Alaska saw the most birds wash up. In Prince William Sound in southern Alaska, more than 4,500 bird carcasses were found every kilometer, or 0.62 miles. 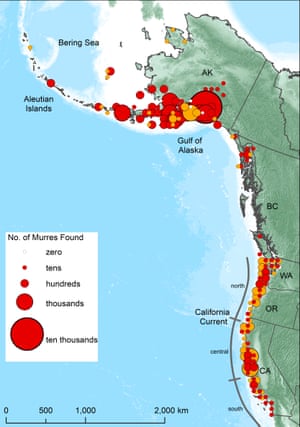 A map of the west coast of North America shows the extreme mortality rates of murres. Photograph: PLOSone

The blob stems from a years-long severe marine heatwave, believed to be caused by an anticyclone weather system that first appeared in 2013. The weather phenomenon known as El Niño accelerated the warming temperatures beginning in 2015 and, by 2016, the rising heat resulted in water temperatures nearly 11F (6C) above average.

Anticyclones form when a mass of air cools, contracts and becomes more dense, increasing the weight of the atmosphere and the surface air pressure.

Sign up to the Green Light email to get the planet’s most important stories.
Read more
–

The study found that the murres most likely starved to death. The seabird must eat half its body weight to survive, but food grew scarce amid intense competition from other creatures. Warming ocean waters gave fish such as salmon and halibut a metabolism boost, causing a fight for survival over the limited supply of smaller fish.

Researchers also uncovered other effects, including a vast bloom of harmful algae along the US west coast that cost fisheries millions of dollars in revenue. Other animals also died off, including sea lions, tufted puffins and baleen whales.

“Think of it as a run on the grocery stores at the same time that the delivery trucks to the stores stopped coming so often,” Julia Parrish, a co-author of the study and UW professor in the School of Aquatic and Fishery Sciences, said in a press release.

The murres’ population also took a hit. According to the study, a limited food supply resulted in reduced breeding colonies across the entire region. Between the 2015 and 2016 breeding seasons, more than 15 colonies did not produce a single chick. Researchers say those estimates could be low since they only monitor a quarter of all colonies.

The seabird has not replenished in numbers after the mass die-off.

“The magnitude and scale of this failure has no precedent,” said John Piatt, the lead researcher. “It was astonishing and alarming, and a red-flag warning about the tremendous impact sustained ocean warming can have on the marine ecosystem.”

Researchers cannot determine how long it will take for the population to rebound – or if it ever will.

“In light of predicted global warming trends and the associated likelihood of more frequent heatwaves”, the study concluded, this could be a stark warning about the impending effects of the climate crisis.

Meanwhile, another huge heat blob has formed off the Washington coast and up into the Gulf of Alaska, and is growing.

[This article was amended on 16 January 2020. An earlier version incorrectly identified the location of the heat blob as off the coast of New Zealand. It is located in the north Pacific.]

(For the source of this, and many other equally important articles, please visit: https://www.theguardian.com/environment/2020/jan/16/hot-blob-ocean-seabirds-killed-new-zealand-north-america/)