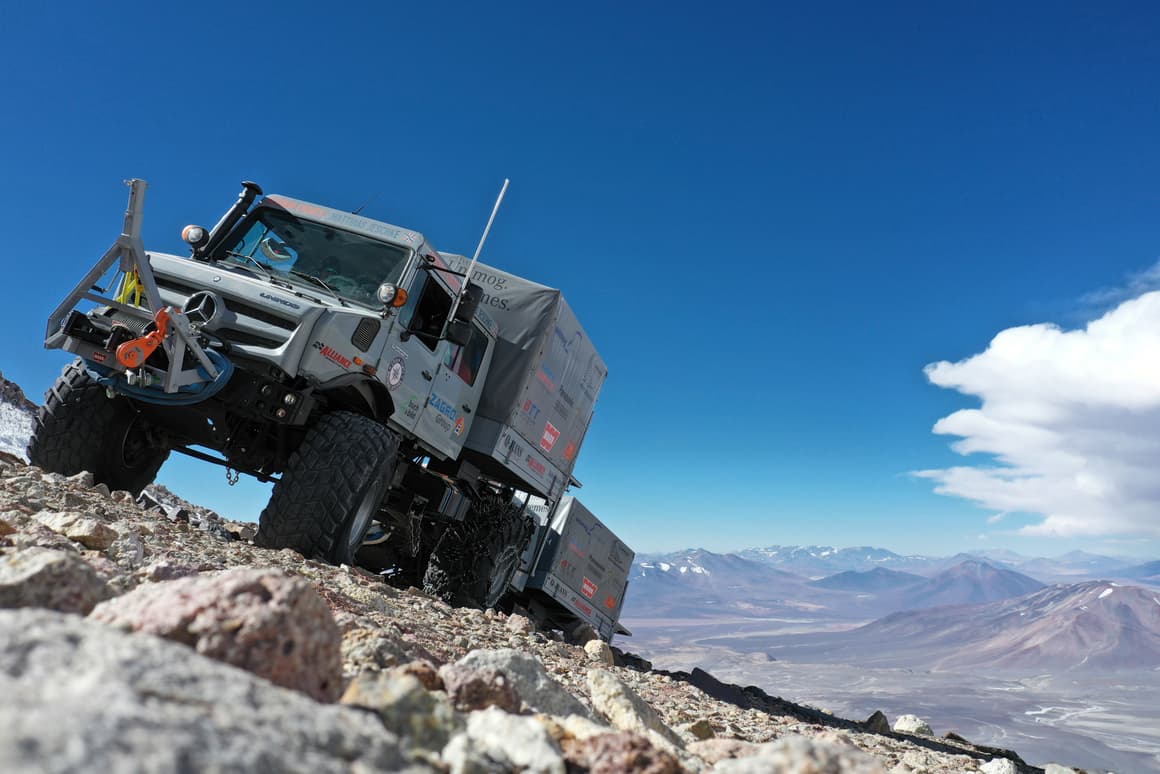 The team’s mission was to install emergency radios at high altitude, but there was time for a little record-setting, too.  Daimler.

Mercedes-Benz’s squat little Unimog trucks have proven their expeditionary prowess yet again with the announcement that a U 5023 truck has set a new altitude record for wheeled vehicles, reaching 6,694 m (21,962 ft) above sea level.

The mission: install four emergency radios at high-altitude campsites around the Ojos de Salado in Chile – the tallest active volcano on the planet, summiting at 6,893 m (22,615 ft) and rising out of the Atacama desert. The trucks: a pair of specially prepped Unimogs with extreme off-road tires and big winch units.

In order to handle the steep, mountainous terrain without toppling, the trucks were also fitted with a system allowing them to move weight forward and backward to modify the vehicles’ centers of gravity.

Expedition leader Matthias Jesche broke his own altitude record, which he set in an older Mercedes Zetros in 2014. Getting up that high wasn’t strictly necessary for the mission – the team had all four radios installed by the time the Unimogs got up to the Amistad high-altitude camp at 6,100 m (20,013 ft). But, hey, as long as you’re there, you might as well take a little time to make history, eh?

Frankly, we’re impressed that the Unimog’s Euro 6-compliant, 4-cylinder gasoline engine was able to breathe up that high. We’d be huffing and puffing at half that altitude. Enjoy the photos, they’re spectacular.

(For the source of this, and many other equally curious articles, please visit: https://newatlas.com/automotive/unimog-u-5023-world-altitude-record/)