Home
Just Plain WEIRD #2
&
News
Why we knock on wood 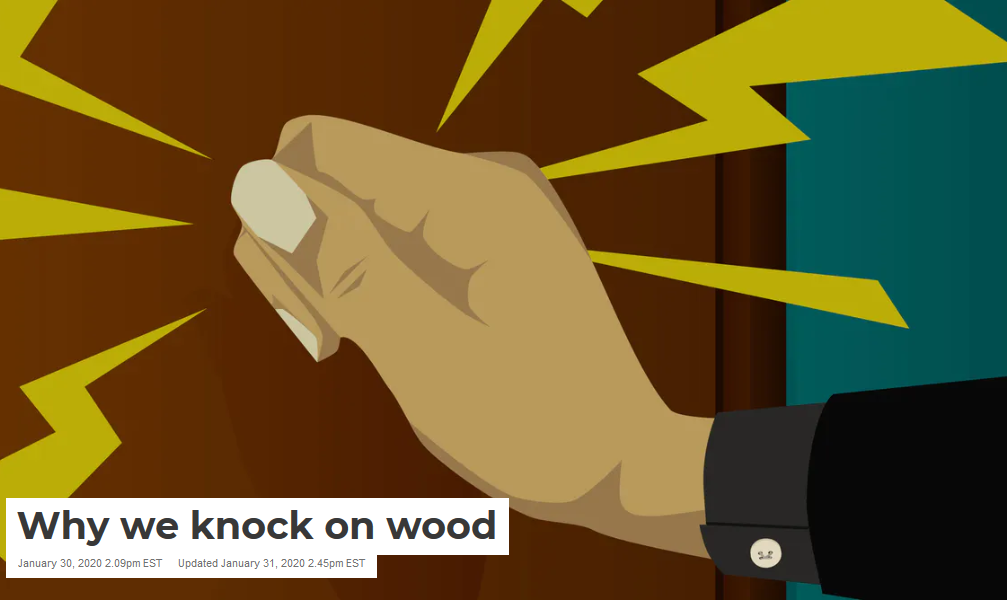 Knocking on wood may be a holdover from the pagan days of Europe, when tree spirits were believed to bring luck.  Saiful bahri 46/Shutterstock.com.

Ever said something like, “I’ve never gotten a speeding ticket” – and then quickly, for luck, rapped your knuckles on a wooden table or doorframe?

Americans accompany this action by saying, “Knock on wood.” In Great Britain, it’s “Touch wood.” They knock on wood in Turkey, too.

As a teacher of folklore – the study of “the expressive culture of everyday life,” as my favorite short definition puts it – I’m often asked why people knock on wood.

The answer is complicated

The common explanation for knocking on wood claims the ritual is a holdover from Europe’s pagan days, an appeal to tree-dwelling spirits to ward off bad luck or an expression of gratitude for good fortune.

According to Brewer’s Dictionary of Phrase and Fable, “traditionally, certain trees, such as the oak, ash, hazel, hawthorn and willow, had a sacred significance and thus protective powers.”

Furthermore, the theory goes, Christian reformers in Europe may have deliberately transformed this heathenish belief into a more acceptable Christian one by introducing the idea that the “wood” in “knock on wood” referred to the wood of the cross of Jesus’ crucifixion.

However, no tangible evidence supports these origin stories.

The Oxford English Dictionary traces the phrase “touch wood” only back to the early 19th century, locating its origins in a British children’s tag game called Tiggy-touch-wood, in which children could make themselves “exempt…from capture [by] touching wood.”

Of course, much folklore is learned informally, by word of mouth or customary behavior. So it’s possible – even likely – that the phrase and the ritual predate its first appearance in print.

So why do we still knock on wood?

I’d wager few, if any, people today think – after saying something that might bring bad luck – “I’d better ask the tree spirits for help!”

That puts knocking on wood in a category with other “conversion rituals” like throwing salt over one’s shoulder: actions people perform, almost automatically, to “undo” any bad luck just created.

The anthropologist Bronislaw Malinowski has a theory about such actions, called the “anxiety-ritual theory.” It states that the anxiety created by uncertainty leads people to turn to magic and ritual to gain a sense of control.

Knocking on wood may seem trivial, but it is one small way people quell their fears in a life full of anxieties.

(For the source of this, and many other equally interesting articles, please visit: https://theconversation.com/why-we-knock-on-wood-129864/)