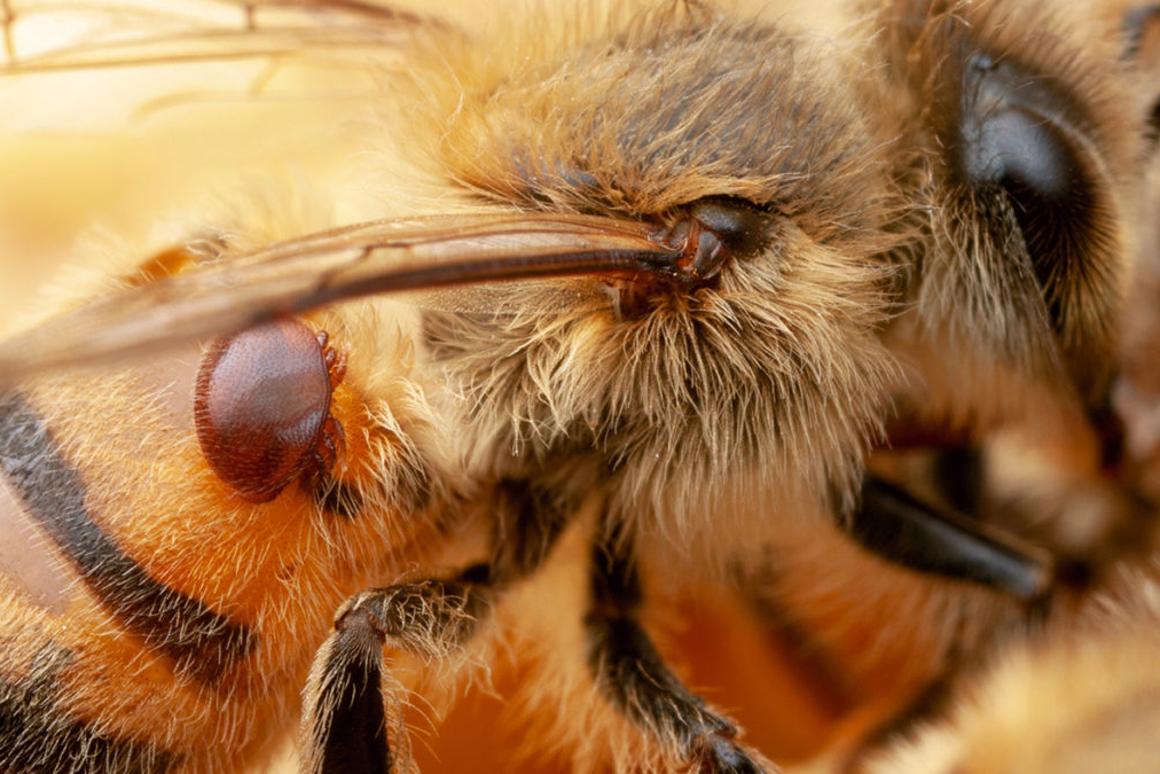 A honeybee with a parasitic Varroa mite attached to its back.  Alex Wild / University of Texas at Austin.

The world is losing huge numbers of honeybees to colony collapse disorder (CCD), which has devastating implications for global ecosystems and agriculture. But now, researchers from the University of Texas at Austin have engineered bacteria that can help bees fend off two of the main causes of CCD.

The two problems in question are Varroa mites and deformed wing virus. Varroa mites are tiny parasites that cling to the backs of bees and feed off their fat stores, severely weakening the host. Get enough of them together and they can devastate a honeybee colony.

As if they weren’t bad enough already, the mites can also transmit diseases such as deformed wing virus. As the name suggests, this virus leaves bees with useless wings, rendering them unable to fly and thus largely helpless. But the researchers on the new study found a way to combat both of these pests using engineered bacteria.

In recent years scientists exploring our gut microbiome have found that it has far wider-reaching implications in human health than we realized. This enormous ecosystem of microbes can affect obesity, diabetes, metabolism, aging, and less obvious things like Alzheimer’s, depression, schizophrenia and even your personality.

Just like humans, bees have their own microbiomes, and so scientists wondered whether this could be tweaked to help them fight off some of the problems that cause CCD. To investigate, the researchers on the new study edited a beneficial bee bacteria called Snodgrassella alvi.

Two different strains of the bacteria were engineered. One would induce an RNA interference (RNAi) immune response in the bees, strengthening their immune systems to be better able to fight off the deformed wing virus. The other would trigger the opposite effect in the mites, turning their own immune system against them and killing them.

In tests, the researchers administered each strain of the engineered bacteria to colonies of bees afflicted with each pest, and watched how it played out over 10 days. In the colonies infected with deformed wing virus, treated bees were 36.5 percent more likely to survive the whole 10 days than control bees that had no treatment. In the mite-infected colonies, the mites were 70 percent more likely to die within 10 days in the treated group than in the control group.

“This is the first time anyone has improved the health of bees by genetically engineering their microbiome,” says Sean Leonard, first author of the study.

The team believes this process should be fairly viable for widespread use. Because the bacteria are easy to grow it should be simple to scale up the treatment, and there’s relatively little risk of the engineered organisms escaping into the wild because the bacteria are unique to the bee microbiome. But of course, the team will still conduct all due research to ensure safety.

Source: University of Texas at Austin

(For the source of this, and many other equally important articles, please visit: https://newatlas.com/science/engineered-bacteria-bees-colony-collapse/)