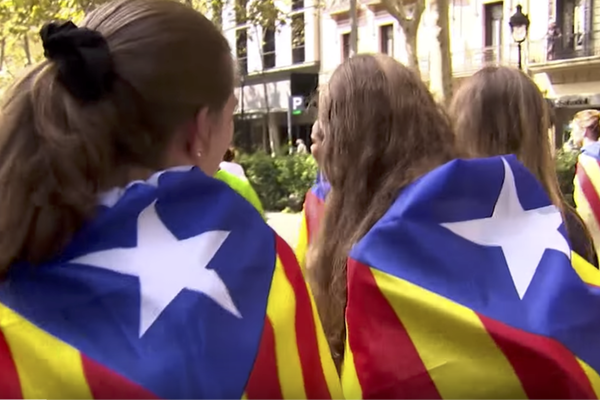 Spain is facing an existential crisis. Catalonia, one of its seventeen constituent regions, has a government supported by a small majority that seeks to be fully independent from Spain. Because Spain had not been able to form a permanent government at the national level without support from the Catalán separatists in parliament, the Socialist prime minister had to promise to allow a referendum to determine if Catalonia would gain independence from the rest of Spain. Most Spaniards oppose such a referendum. The entire country will very likely fall into a state of civil war if the referendum is granted. The roots of this dilemma lie in the manufactured crisis brought on by warring nationalist groups with competing narratives of Spain’s past.

Spanish nationalists, those descended from the Fascists who supported Spanish dictator Francisco Franco, always ignore the cultural diversity that characterizes Spain. Catalán nationalists, descended from a group of anti-Francoists, pretend that Catalonia is and has always been so radically distinct from the rest of Spain that it cannot possibly tolerate political union with the rest of the country.

Both sides want to seize control by destroying Spain’s diversity. Spanish nationalists seek to undo the current political status quo—a unitary nation that has given significant power to its regions, called autonomous communities. Instead, they want to create a single, unified Spanish (Castilian) identity upon all ethno-linguistic minorities in the country. Catalán nationalists also want to impose a single cultural and political identity within a completely independent nation where ethno-linguistic minorities such as non-white Latin Americans and Castilian-speaking Spaniards would be subordinated to Catalán cultural and political power.

Both sides use history to make their case but in each case their reading of history is flawed. The truth is more complicated. Spain is an accident in that until 1640, it was not obvious that Portugal was any different from the rest of the Iberian Peninsula. Just like India, Bangladesh, and Pakistan used to be simply called India, Portugal used to be part of what was called Hispania, then the name of the entire Iberian Peninsula.

During the Roman era, Latin spread throughout most of the Iberian Peninsula except for the northern region where it failed to take root due to strong Basque resistance. When the Roman Empire collapsed in the Latin West before 476, the Visigoths and Suebi established kingdoms in what was then called Hispania. The Suebi influenced Latin speakers in the western part of the Peninsula, while the Visigoths influenced the southern, central, and eastern portions of the Peninsula. The Basques managed to survive in the northeastern part of Hispania. Thus, before the Islamic conquest ended the earliest phase of the Middle Ages on the Iberian Peninsula in the years after 711, there were three major groups on the Peninsula:Hispano-Romans with more Visigothic than Suebic influence, Hispano-romans with more Suebic than Visigothic influence, and non-Latinized Basques.

When Muslims from North Africa conquered the Peninsula, a few areas remained either independent or quickly became independent form Muslim rule. Most of the free regions were partially or completely Basque, with one key exception. The one Latinate region freed from Muslim rule early on was Asturias. Today’s Spain largely derives from the political and cultural legacy of Asturias, which became a kingdom less than a generation after the [Muslim] invasion of the Iberian Peninsula.

Asturias developed out of the Hispano-Roman/Visigothic tradition. When it liberated Galicia from Muslim control in 739, it was joined by a major group from the Hispano-Roman/Suebic cultural sphere. The Galicians helped reconquer and colonize what became Portugal. As a result, Portugal and Galicia have more in common with each other than either does to the rest of the Peninsula. The differences between the Suebic-influenced cultures (Galicia and Portugal) and Visigothic-influenced cultures like Asturias were, and are, fairly minimal and certainly do not justify Portuguese independence.

Around 790, the Franks (a Germanic people who deeply influenced both France and Germany) intervened during the re-conquest (or Reconquista) of Hispania. They established the Marca Hispanica, which included the Christian areas of what is now Catalonia, increased Christian control in certain areas on the peninsula and established the basic building blocks of the northeastern and north-central regions of medieval Hispania—the counties of Aragón and what became known as the Catalán counties. Catalán nationalists claim that the Frankish influence and the nature of the Catalán counties made Catalonia irreconcilably different from the rest of Hispania, but this [is] a late modern fudge and exaggerates small differences between Aragón and the Catalán counties. The Catalans are not merely Frankish or French as some nationalists have implied but strongly linked to the Hispano-Romans.

In sum, Frankish intervention, Basque resistance, and the continued Reconquista fought between Christian and Muslim states, with Latin speakers on both sides, led to a mishmash of states and cultures in Hispania. As the Christians of Hispania reclaimed the Peninsula, the Ibero-Romance languages came to dominate the whole peninsula, except the Basque areas. By 1492, Islam was defeated in the Peninsula and most of the disparate cultures and territories were united under the personal union of two monarchs, Ferdinand and Isabella. This union eventually led to what we call Spain. Spain ruled over Portugal from 1580-1640. The Portuguese gained their independence by force.

Culturally and historically then, the Iberian Peninsula is one unit. Only Portugal never was consolidated into Spain. While Catalans are different from Castilians, as are Aragonese, Asturians, and Galicians from each other.

The history of Spain does not support the Spanish nationalist claim that Castilian is the natural language and culture for all people of the Peninsula. Castilian evolved in lands between Asturias and the Muslim heartland and became dominant through luck, politics, and force of arms. However, Castilian was not the dominant language of much of Spain until the last three centuries. More importantly, Castilian was the choice of the peoples on which it was imposed. Today, it is impossible to divide Spain according to “irreconcilable cultural differences” without giving in to hate, xenophobia and racism. It is also impossible to rightly impose one culture, one language, one ethnicity upon all Spaniards. Only diversity and inclusion can save a united Spain and the only form of government that can constitutionally support inclusion and diversity is federalism. The alternative is chaos.

(For the source of this, and many other equally intriguing articles, please visit: https://historynewsnetwork.org/article/174254)