Most people haven’t even heard of Transnistria, the breakaway state of Moldova that hugs its border with Ukraine. And that’s partly what makes it so fascinating to visit. 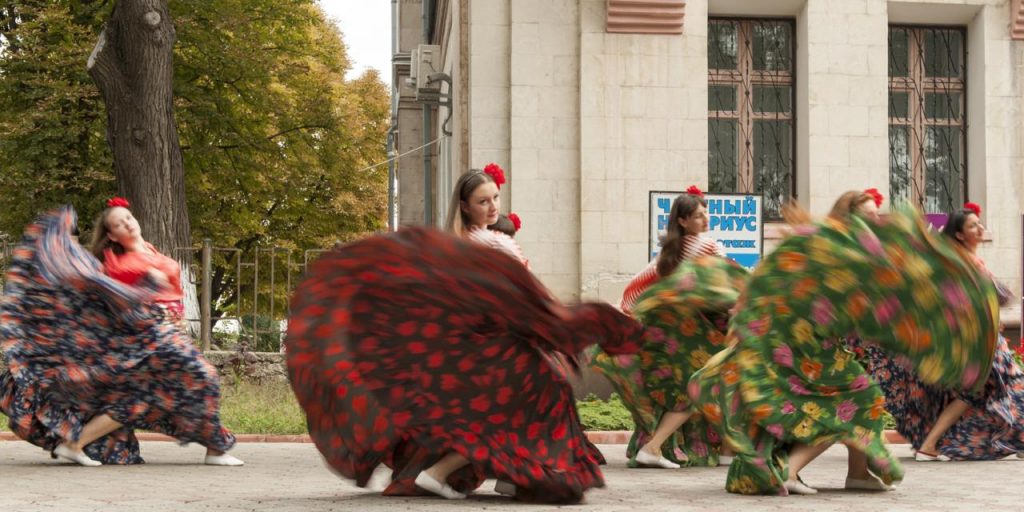 By the time the morning sun had crept above the city’s Soviet-era apartment blocks, the crowd-control barriers lining Suvorov Square in downtown Tiraspol were already three-deep with families dressed in their Sunday (in this case, Monday) best. Their collective excitement was almost palpable on this surprisingly warm September day; anyone would have thought a royal wedding was on the cards.

But in Transnistria (also spelled Trans-Dniester), a sliver of land tracing Moldova’s border with Ukraine for 400km, the capital’s Independence Day celebrations are the highlight of the year. Never mind that the tiny Eastern European nation, formally called the Pridnestrovian Moldavian Republic (PMR), doesn’t officially exist.

Transnistria does not officially exist, but it has its own government, currency and passport (Credit: Leisa Tyler/Getty Images)

Unrecognized as a nation by any member of the United Nations despite declaring its independence in 1990, a year before the Soviet Union crumbled, Transnistria is a wonderfully peculiar place. Less than 70km south-east of the Moldovan capital of Chisinau, Tiraspol (pop: 130,000) is often described as being stuck in the USSR. Indeed, from the imperious statue of Lenin guarding Transnistria’s Brutalist parliament building to its streets named after Communist luminaries and significant dates, it’s certainly not short on Soviet-era relics.

We have our own constitution, government, military, currency and even passports

With highlights including a fancy rifle-twizzling routine and military commanders zooming around in Soviet-era jeeps saluting assembled troops, the 2019 military parade marking Transnistria’s 29th year of self-declared independence didn’t exactly challenge the stereotype. That was until the band launched into a rendition of American rock group Survivor’s 1982 hit “Eye of the Tiger”, providing the first hint that, despite technically being part of Moldova and bankrolled by Russia, this proud little “country” marches to its own beat.

“It makes us sad that our independence isn’t officially recognized, but we feel independent,” explained public servant Vera Galchenko as she helped a nonagenarian military veteran into a taxi following the 45-minute parade, his frail body buckling under the weight of World War Two medals. “We have our own constitution, government, military, currency and even passports,” she said proudly.

But with no direct access to the only three states that recognize Transnistria (Abkhazia; Nagorno-Karabakh, also known as the Republic of Artsakh; and South Ossetia – all also disputed territories), the passport is essentially useless to its 500,000-odd residents. However, most hold dual or triple nationality with Russia, Moldova or Ukraine, so they’re not exactly trapped in this landlocked enclave characterized by sleepy villages, abandoned Soviet factories, and vineyards that supply Tiraspol’s enormous Kvint brandy distillery.

Since Transnistria declared independence 30 years ago, Tiraspol’s population has actually decreased by at least a third, with most residents having left to seek work in Russia due to declining economic prospects following the fall of the USSR. But while life is not easy in this presidential democracy, where wages are even lower than in Moldova (one of Europe’s poorest countries), while exploring the region I learned that many are content with the life here.

You may also be interested in:
• Europe’s strange border anomaly
• The places that don’t exist
• The US land lost in Canada

“We’ve got a good climate, good local products like fruits and vegetables and there’s help from abroad,” said Andrey Smolenskiy, founder of Transnistria Tour. Smolenskiy explained that his company became Tiraspol’s first travel agency to work with tourists coming from abroad in 2011. By “abroad”, he means Russia, which builds hospitals and schools in Transnistria, supplies its power and subsidizes the pensions of its ageing population.

Transnistria makes no bones about its love for what Smolenskiy refers to fondly as the “mother country”. While Transnistria’s three main ethnic groups are similar in size, Russian is the common tongue. Russian flags flutter alongside Transnistrian flags (the world’s only national flag that still bears the hammer and sickle insignia) on the city’s buildings, and during the Independence Day parade, in which Russian soldiers also take part, novelty flags are sold with both flags on the same stick.

“Transnistria has historically considered itself a part of the Russian cultural space,” explained Anatolii Dirun, academic supervisor at Tiraspol School of Political Studies. “Not to mention the fact that Russia is the guarantor of peace for Transnistria.”

Despite nearly a third of its 1,500 troops forming part of a trilateral peacekeeping force, the Operational Group of Russian Forces (OGRF)’s presence in Transnistria irks Moldovan and Western officials. But with one of the largest USSR weapons dumps in Europe under their guard just 2km from the Ukrainian border, it’s no wonder Russia has ignored calls from the UN to withdraw its troops. Plus, it has the support of Transnistria’s pro-Russian government, which considers the ORGF (which also takes part in the Independence Day parade) an essential stabilizing force.

Given Transnistria’s rocky start on its road to independence, it’s easy to understand why. In the late 1980s, growing nationalist sentiments in the Moldovan Soviet Socialist Republic (Moldovan SSR; one of the 15 republics of the USSR and now known as the Republic of Moldova) unsettled the primarily Russian-speaking ethnic minorities in Transnistria (then part of the Moldovan SSR). A move to ban the Russian language was the last straw, prompting Transnistria to safeguard its cultural heritage by proclaiming the independent Pridnestrovian Moldavian Soviet Socialist Republic (PMSSR) on 2 September 1990.

Desperate to keep a fracturing Soviet Union together, then-leader of the USSR Mikhail Gorbachev declared the proclamation of the PMSSR null, paving the way for the Moldovan SSR to declare its own independence – with its territory encompassing Transnistria – in 1991. Tensions between the two regions escalated to a military conflict in March 1992, and by the time a ceasefire was declared a few months later in July, at least 1,000 people had died. Aside from a few ceasefire violations in the early years, however, Transnistria has been at “peace” ever since. Not that you’d know it from the headlines – or the travel advisories.

“Stories about the tense situation in the region are a product of the myth of instability in the region,” said Durin. “Everyone who has been to Tiraspol notes how calm it is.”

While there’s no denying regional political tensions continue to run high, with Moldova at the center of a seemingly never-ending tug-of-war between Russia and the EU, I discovered that “calm” is a fair description of Tiraspol. Despite the strangeness of this semi-deserted city from a bygone era, rarely have I felt safer wandering the streets of a European capital. And while big crowds are something I would usually avoid in a frozen conflict zone, the Independence Day celebrations couldn’t have been more family-friendly.

As the last battalion of soldiers marched out of Suvorov Square, 25th October Street (Tiraspol’s main boulevard) morphed into what can perhaps best be described as a multi-ethnic sideshow alley. Between browsing street stalls peddling nationalist trinkets and artisanal bread decorated with Communist symbols, I paused to watch a gaggle of grannies with Pavlovsky shawls knotted under their chins jig to Russian folk music blaring from portable speakers. Nearby, children queued to have their photo taken brandishing a vintage shashka, a sabre sword used by the Cossacks, and small groups of students milled about wearing colorfully embroidered traditional regional dress.

The celebrations spilled into a leafy park sandwiched between 25th October St. and the lazy steel-blue curve of the Dniester River, which roughly marks Transnistria’s border with Moldova. Here I watched pre-teens pummel each other in a makeshift boxing arena, joined families queuing for plates of pork shashlik sizzling on mobile grills, and looked on amused as children gleefully clambered over the Soviet-era tanks, anti-aircraft guns and other artillery wheeled out to showcase Transnistria’s military might.

As the sun began its retreat for the day, setting the golden domes of the Church of the Nativity behind Suvorov Square aglow, a series of scantily clad popstars took turns belting out Eurovision-esque hits on the temporary stage that had been erected for the morning’s presidential address. Having expected the revelry to kick on beyond the 21:00 fireworks, I was surprised to emerge from a local restaurant shortly afterwards to find the city quiet once more, save for the rattle of Soviet-era trolley buses rumbling along cracked concrete streets.

The 16th-Century Bendery Fort has on-site museums and views over the Dniester River (Credit: Sarah Reid)

With few attractions and even less tourism infrastructure beyond Tiraspol, many of Transnistria’s estimated 20,000 annual visitors come on day trips from Moldova. Indeed, with regular buses from Chisinau to Tiraspol and visa-free entry to Transnistria (a hotel reservation must be produced at the border posts maintained by the Transnistrian military to stay more than one day), it’s relatively easy to visit – although navigating the nation as a non-Russian speaker is no simple task. It’s a shame, for the semi-restored 15th-Century Bendery Fort near the Moldovan border and the serene 19th-Century Noul Neamț Monastery in Chitcani, not to mention the quirky Soviet monuments hidden in Tiraspol’s backstreets, make it well worth staying for a few days.

“Tourism is something we need to work on,” Galchenko told me before we parted ways at the parade. “We need to make it easier for people to come and experience Transnistria.”

But while increased tourism could no doubt give Transnistria’s flagging economy a boost, exploring Eastern Europe’s forgotten frontier before it’s on the map – the tourist map, at least – is half the fun. With Moldova reluctant to give it up, and Russia unlikely to get out, becoming a truly independent nation may remain a pipedream for the people who call Transnistria home.

Places That Don’t Belong is a BBC Travel series that delves into the playful side of geography, taking you through the history and identity of geo-political anomalies and places along the way.

(For the source of this, and many other equally intriguing articles, please visit: http://www.bbc.com/travel/story/20200205-celebrating-a-nation-that-doesnt-exist/)