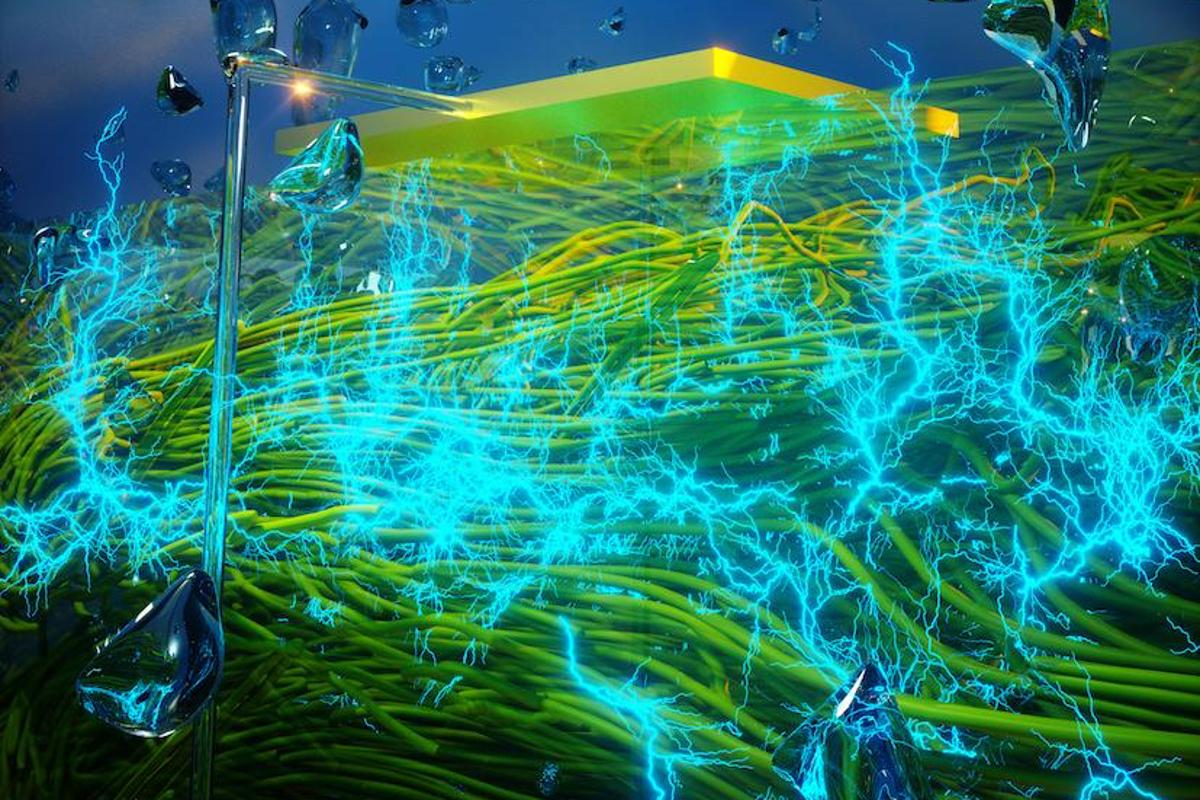 An illustration depicting the protein nanowire film, with one of the electrodes visible at top.  UMass Amherst/Yao and Lovley labs.

Developed by a team at the University of Massachusetts Amherst, the air-powered generator (or “Air-gen”) incorporates an ultra-thin film made of nanowires. Less than 10 thousandths of a millimeter thick, that film is sandwiched between two flat rectangular electrodes, although the one on top covers only part of the film, leaving the rest exposed to the air.

Produced by a type of bacteria known as Geobacter, the nanowires themselves are made of an electrically-conductive protein. Because of this quality – along with their surface chemistry and the small size of the pores between them – the wires generate an electrical current between the two electrodes, whenever they absorb water vapor from the air.

Even in its current prototype state, the device is already able to power small electronics, and it works in areas as dry as the Sahara Desert. What’s more, the scientists have now developed a new strain of E. coli bacteria, which produces much greater amounts of the protein nanowires. It is hoped that this development could make the Air-gen commercially viable, perhaps one day replacing the batteries in devices such as smartphones … although the possibilities don’t stop there.

“The ultimate goal is to make large-scale systems,” says electrical engineer Jun Yao, who led the research along with microbiologist Derek Lovley. “For example, the technology might be incorporated into wall paint that could help power your home. Or, we may develop stand-alone air-powered generators that supply electricity off the grid. Once we get to an industrial scale for wire production, I fully expect that we can make large systems that will make a major contribution to sustainable energy production.”

The study is described in a paper that was recently published in the journal Nature.

Several years ago, a team at MIT also developed a system that generated electricity utilizing ambient water vapor, although it incorporated a series of water-repelling and water-attracting conductive plates.

(For the source of this, and many other equally intriguing articles, please visit: https://newatlas.com/energy/air-gen-water-vapor-electricity/)