A volcano in California is a hot spot for conspiracy theorists. 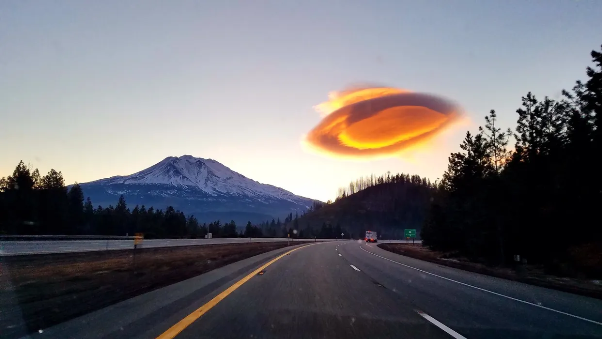 Mount Shasta in California has become a nexus of conspiracy theories and unusual events. The latest viral sensation from the area has been a UFO-shaped object that appeared in the skies above the potentially active volcano peak of 14,179 feet on the morning of February 12th.

Upon closer look, this was not an alien spaceship but a beautiful lenticular cloud, the kind that is often shaped like lentils or UFOs, depending on your perspective. It was so convincing, however, that the U.S. Forest Service had to deny its extraterrestrial origins in a statement.

The flying saucer or lens shape of these clouds is caused by their development along the downwind sides of mountains. When moist and stable air goes over a mountain, oscillating waves are created. The crest of the waves causes condensation of vapor, which evaporates through the troughs, explains Weather Underground. These evaporations take the form of lenses and spaceships, looking layered.

Mount Shasta, in particular, has seen its share of lenticular cloud sightings, leading to its status as a new focal point for alien hunters much like Roswell, New Mexico. The latest UFO cloud quickly became a social media sensation, as you can see in these posts of the enigmatic formations:

Mount Shasta has also seen other unusual happenings, with a mysterious side hole that appeared over 10 years ago becoming the subject of a documentary. Its sudden emergence connected with local legends about a lost continent of Lemuria supposedly hidden under the mountain. This mythical kingdom would be there along with its capital city Telos.

The first thought of the documentary filmmaker Elijah Sullivan about the giant hole was that it was from people trying to find Lemuria.

“You’ll hear a lot of people talking about Lemuria, maybe even asking for directions,” he told the news in 2018. “People make pilgrimages here — it’s like a New Age mecca.”

In 1987, the area was home to a New Age conference dubbed a “spiritual Woodstock”.

It is also known to be sacred to the Native American Winnemem Wintu tribe, indigenous to this area.

If you’re in the mood to check out the stunning area for yourself and see some aliens in the skies above, you can come to the nearby town of McCloud for the “Meet the Venusians — We Are in Contact” conference from August 25-30 of this year. It promises to be a “tribute to honor of all the Venusians & Pleiadean’s who have taken the time to present themselves” with a schedule of speakers and events focused on healing and consciousness.

(For the source of this, and many other equally intriguing articles, please visit: https://bigthink.com/surprising-science/ufo-sightings-why-mount-shasta-is-the-new-roswell/)
Tweet