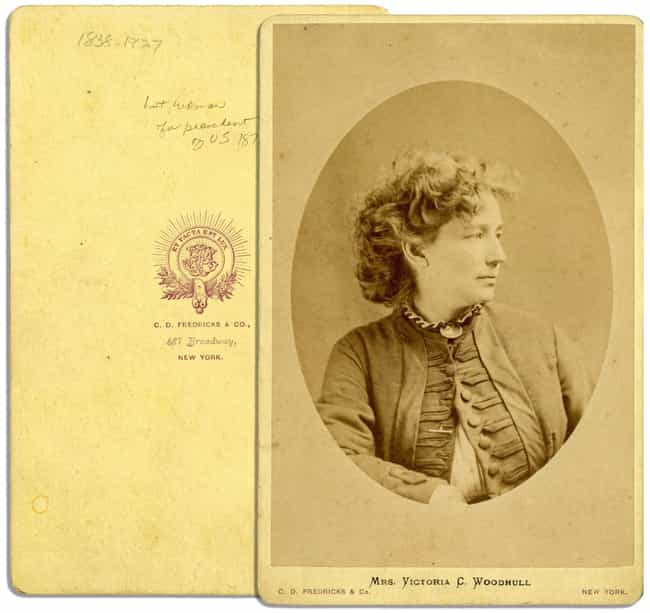 Who was Victoria Woodhull? You might not know her name, but once you hear her story, you’ll never forget her. She was the first woman to run for President of the United States, and as a third-party candidate, no less. She started a newspaper, and was a women’s suffrage pioneer. Woodhall also became one of the first female stockbrokers on Wall Street and even ran her own brokerage – all during a time period in which women weren’t supposed to work and didn’t have the right to vote.

Woodhull was born on September 23, 1838, in the tiny hamlet of Homer, OH. Victoria Claflin, as she was then named, was the seventh of ten children. Her childhood was unconventional: her mother, Roxanna, was a follower of the new Spiritualist movement, while her father, Reuben (nicknamed “Old Buck”) was a snake oil salesman. From Ohio, Woodhull went to New York, and later England. After living a very full and somewhat controversial life, and having an immeasurable influence on politics, Woodhull died at the age of 88 in Worcestershire, England, on June 9, 1927.

From her unusual childhood to her groundbreaking political career, Victoria Woodhull is an eccentric and fascinating historical figure.

Hillary Clinton may have been the first woman to run for president on the ticket of a major party, but Woodhull was the first woman to ever run for the position, period. Woodhull declared her candidacy back in 1870 for the 1872 election. She ran under the banner of a small, independent party: the Equal Rights Party, previously known as the People’s Party. Her opponents were Ulysses S. Grant, the Republican incumbent, and Horace Greeley, the Democratic candidate. Woodhull’s running mate was Frederick Douglas, even though he never agreed to the position. In fact, Douglas gave public speeches in favor of Grant.

On election day, Woodhull couldn’t even vote. Women didn’t have the right at the time, but Woodhull also spent that day in prison for sending obscene material in the mail (her newspaper had revealed Henry Ward Beecher’s infidelity). Woodhall didn’t receive any electoral votes, but it’s unclear whether she received any popular votes.

She And Her Sister Were The First Women To Start A Newspaper In The U.S.

Woodhull and her sister, Tennessee Claflin, started a newspaper in 1870. Called Woodhull & Claflin’s Weekly, it was published from 1870 until 1876. The paper focused on a number of controversial topics, such as women’s suffrage, free love, and Spiritualism, all things that Woodhull supported. The newspaper was the first U.S. publication to run Karl Marx’s Communist Manifesto, and also exposed the extramarital affairs of Henry Ward Beecher.

Woodhull & Claflin’s Weekly was the first newspaper in the United States to be financed, run, and published by women. Although The Revolution – a women’s rights newspaper run by Elizabeth Cady Stanton and Susan B. Anthony – began publication in 1868, it was financed by men.

She Started The First Women-Run Stock Brokerage On Wall Street

In 1870, with the financial backing of Cornelius Vanderbilt (who was rumored to be Tennessee Claflin’s lover), Woodhull and her sister opened the first Wall Street brokerage run by women. Called Woodhull, Claflin and Co., the brokerage employed other women as well.

Woodhull and Claflin quickly became known as the “bewitching brokers” and were very successful. Following stock tips from Vanderbilt, as well as coming up with some of their own, the two made millions.

She Testified Before Congress In Support Of Women’s Suffrage

On January 11, 1871, Woodhull became the first woman to speak before a Congressional committee. She gave a speech to the House Judiciary Committee, in which she claimed that the newly ratified 14th and 15th Amendments gave women the right to vote. Woodhull had gotten the invitation from Benjamin Butler, a Republican from Massachusetts whom she had befriended.

Woodhull’s assertion that women could vote under the new amendments didn’t pan out; women finally received the right to vote in 1920, thanks to the 19th Amendment. But for a short period of time, she had the ears of lawmakers.

She Worked As A Magnetic Healer, Clairvoyant, And Spiritualist

Woodhull’s parents put her to work as a clairvoyant at a young age. She reportedly starting having visions when she was ten, and her sister, Tennessee Claflin, had premonitions. Woodhull’s mother was a follower of the burgeoning Spiritualist movement, and she and her husband pushed the girls to go on a traveling circuit so that they could earn money for the family. On the road, they told fortunes and held seances.

Woodhull worked as a magnetic healer as well, helping the sick and injured with a series of “healing” magnetic devices. She and her sister were so successful that they were able to set up their magnetic healing practice in New York City as adults.

She Believed In Free Love

Woodhull was married three times. She married her first husband, Dr. Canning Woodhull, when she was 15; they had two children, Byron and Zula. The family moved to San Francisco, where Woodhull reportedly worked as a topless waitress. They eventually wound up in New York City, where Woodhull’s husband deserted the family after 11 years of marriage.

Woodhull divorced her first husband, and then took up with Colonel James Harvey Blood, a Spiritualist who supported her free love beliefs. They divorced in 1876. Her third marriage, to John Biddulph Martin, ended with his death in 1901.

Although divorce was greatly frowned upon during the 1800s, Woodhull didn’t seem to care about her reputation. She felt that women should have the right to leave marriages that were unbearable, not stay simply because that was the expected thing to do. The doctrine of free love espoused at the time supported this ability to choose one’s relationships.

Woodhull frequently fought rumors that she was a prostitute. She wasn’t one, as far as historical evidence can tell, but she did support legalized prostitution. That was just a part of her free love philosophy that pointed out the negative effects of monogamy. Woodhull was upset by the fact that women in New York City were arrested for prostitution, and even centered part of her presidential campaign around legalizing it. However, she was up against a very prim and proper Victorian society, as well as the new Comstock Act, which made it difficult to obtain any materials deemed “obscene.”

The International Workingmen’s Association was an organization of leftist thinkers run by supporters of Marxism. The group, also called First International, started in London, but quickly opened up branches throughout Europe and the United States.

Woodhull was a member of the women’s section of the association, and she published articles supporting the group’s socialist cause in her newspaper, Woodhull & Claflin Weekly. Unfortunately, her support for Marxism damaged her reputation after she began her Presidential campaign. She was already a controversial public figure, but her connection to the group just made it worse.

She Was Close With The Vanderbilts

While Woodhull lived in New York City, she became very close to Cornelius Vanderbilt (nicknamed the “Commodore”). He gave her stock tips and helped her start her Wall Street brokerage. There were rumors that Woodhull and Vanderbilt were lovers (or that he and her sister Tennessee Claflin were lovers), but this hasn’t been proven.

Upon Vanderbilt’s death, his son and heir, William Henry Vanderbilt, gave a large amount of money to Woodhull. Some historians believe that this was a pay off to ensure that she kept quiet about her relationship with the Commodore. Whether it was or not, Woodhull took the money offered and set up a new life in London, where she worked as a lecturer.

She Was Arrested For Publishing “Obscene Information”

In November of 1872, a special issue of the Woodhull & Claflin Weekly was sent out. This particular issue contained a number of scandalous claims, one of which attacked Henry Ward Beecher, a popular preacher and abolitionist. According to an article written and published by Woodhull, the married Beecher – who frequently criticized Woodhull’s free love philosophy – had been having an affair. Other pieces claimed that Wall Street broker Luther Challis had seduced several underage girls.

Some historians think that this issue either was designed to drum up support for Woodhull’s presidential run, or that she and her sister had been blackmailing these men, and when they refused to pay up, the duo went public. Either way, this special issue led to the arrest of Woodhull and Tennessee Claflin on the charge of sending obscene information through the U.S. mail.

She Was Not Formally Educated

Woodhull did not receive a formal education. State-mandated education wasn’t the norm in the early to mid 1800s, and school was usually reserved for the wealthy; poor families needed all of their children to work for a living. Because of Woodhull’s lot in life (her mother was illiterate and her father was a con man) she only received three years of formal education at the Methodist Church School in Homer, OH. After the family’s mill burned down, Woodhull’s father was accused of committing insurance fraud, and he began to move his family around Ohio, making it even more difficult for Woodhull and her siblings to receive an education.

She Believed That Women Were Completely Equal To Men

Woodhull believed that women were completely equal to men, and that the inequalities of the time were unfair. She campaigned for women’s right to vote, and even gave a speech before Congress on the topic. According to Woodhull, expectations that women weren’t supposed to run their own businesses, had to remain prim and proper, and couldn’t divorce their husbands were nothing short of ridiculous. She even went so far as to claim that “Women are the equals of men before the law, and are equal in all their rights.”

She Had A Falling Out With Other Famous Suffragettes

You might think that the women’s suffrage movement of the late 1800s and early 1900s was filled with women who all got along, because they were fighting for the same cause. That isn’t quite true. Woodhull initially agreed with her fellow activists, but soon, Susan B. Anthony and her cohorts turned on her, calling Woodhull and her sister, among other things, “lewd and indecent.” Apparently Woodhull’s ideas of free love, when combined with her need for attention and her grand political ambitions, were too much for the other suffragists to swallow.

She’s Getting The Hollywood Treatment

Woodhall is enjoying something of a resurgence. The biopic Victoria Woodhull is set for release by Amazon Studios, with Oscar winner Brie Larson attached as producer and star.

In addition, Outrageous: The Victoria Woodhull Saga by Neal H. Katz is being adapted as a 10-episode miniseries.

(For the source of this, and very many other equally interesting articles, please visit: https://www.ranker.com/list/victoria-woodhull-facts/amandasedlakhevener/)