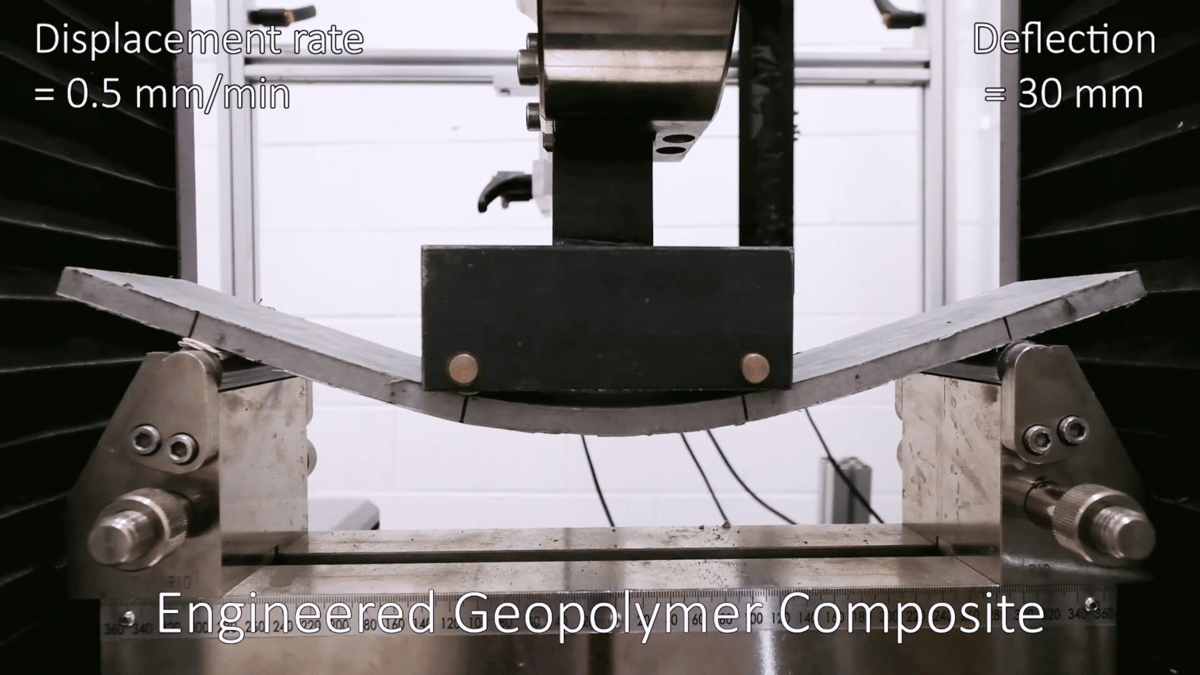 The new bendable concrete is put to the test.  Swinburne University.
–
Concrete is the world’s most widely-used building material thanks to its incredible strength – but it doesn’t stand up well against bending. Now, researchers at Swinburne University have developed a new type of concrete that can not only bend better, but doesn’t require cement to make, reducing its environmental footprint.

Put a huge weight on top of a pillar of concrete and the material will barely notice it’s there. But apply that force to the center of a pillar, and it will bend and break relatively quickly. This weakness is because concrete has high compressive strength but lower tensile strength.

In response to that, bendable concrete has been created and improved over the last few decades. And now, the Swinburne team has improved the recipe further, by reducing how much energy it takes to produce the material, as well as cutting carbon dioxide emissions during production.

The biggest polluter in concrete production is cement, the “glue” that holds the wet mixture together. Making cement requires high temperatures, so it gobbles up huge amounts of energy and churns out a lot of greenhouse gases. And as useful as bendable concrete is, it still involves this process.

But the newly-developed concrete ditches cement entirely. Instead, it’s made using industrial waste products such as fly ash, the airborne debris given off in coal-fired power stations. This geopolymer composite, as it’s known, can be cured at room temperature, so it’s far more environmentally friendly to make.

This alternative process has been used to make regular concrete in the past, but the team says this is the first time it’s been used in bendable concrete. The resulting product cuts energy consumption and greenhouse gas emissions during production, while being far more bendable than standard concrete.

And even when the new material finally does crack, tiny polymeric fibers in the mixture make sure that it doesn’t shatter. Instead, it will continue to hold strong under tension with multiple tiny fractures. The team says that this bendable concrete could, for example, be used in earthquake-prone areas for buildings that can withstand regular shakes without weakening. Cutting its carbon footprint should help make this more viable.

The research was published in the journal Construction and Building Materials. The bendable concrete is put to the test in the video below.

(For the source of this, and many other equally interesting articles, please visit: https://newatlas.com/materials/cement-free-bendable-concrete/)