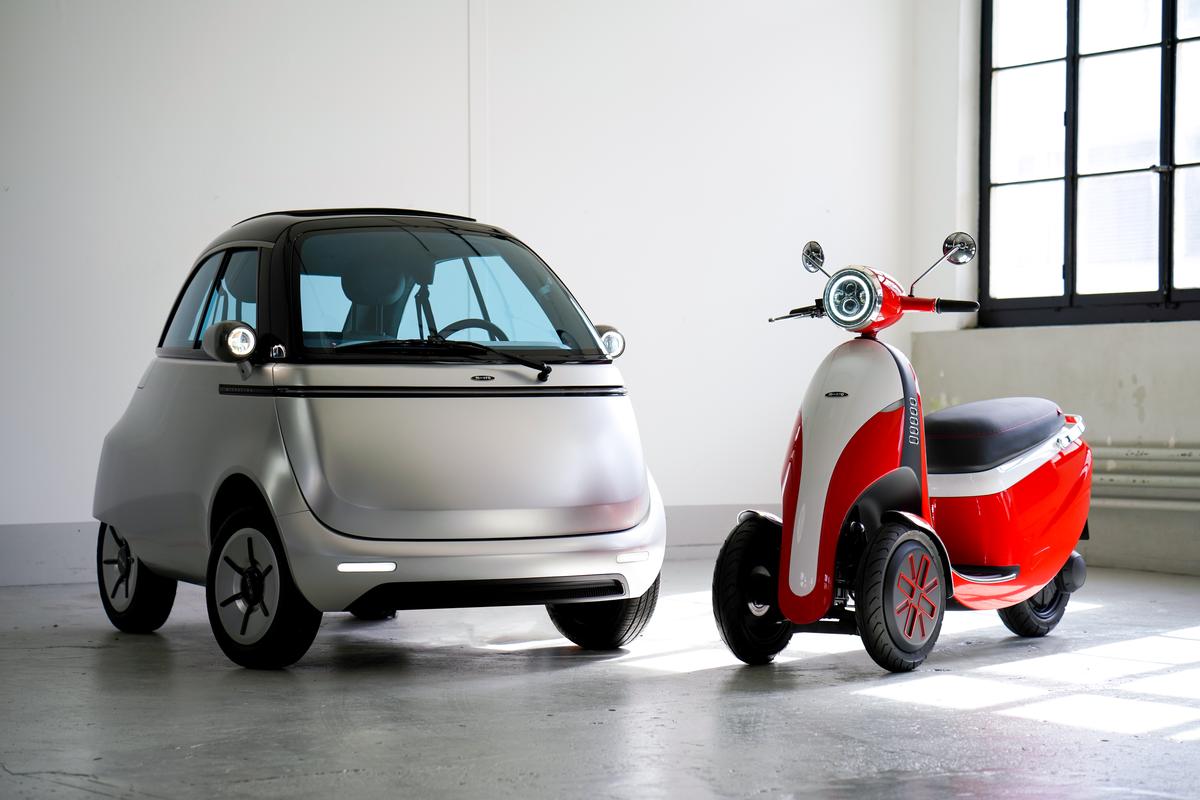 Micro Mobility System AG started out selling e-scooters in 1999, and is still shipping around 1.5 million units every year. Recognizing that e-mobility doesn’t come in a one-size-fits-all package, the company decided to expand into three last mile transport categories: e-kickscooters and e-bikes; medium distance moto-scooters; and small city cars to keep occupants protected from the weather for up to 200 km journeys. New products in each of these categories were announced recently.

Up first is the impossibly cute Microlino 2.0 four-wheel micro city car. Though the first generation wasn’t actually made available for sale, the design team felt that a production model needed to have a new retro-modern look that will keep it fresh for years to come.

The company collaborated with the thousands of reservation holders on the new design, which now features an eye-catching LED light bar to the front and rear, with integrated turn signals. The charging port has been moved to the rear, and the rear track has increased by about 50 percent to accommodate some of the redesign elements.

The A pillar has been narrowed for improved visibility for the driver, the steering column has moved from the door to being fixed on the vehicle’s floor, and the door handle is now on the side. There’s a tablet-like display in front of the steering wheel, and a tubular bar along the inside of the door becomes the dash when the door is closed, and allows the driver to clip on accessories like a smartphone or Bluetooth speaker.

The team also took the opportunity to update the technical side of the design, with a pressed steel chassis instead of a tubular frame for improved rigidity, aluminum and steel replace the plastic body components of old – though the front and rear bumpers will still be plastic – and there’s independent suspension to the front and rear. The motor has been moved from the rear axle to the chassis, and the underfloor NMC batteries offer a per charge range of 200 km (124 mi).

Billed as the Microlino’s little sister, the equally retro-cool Microletta electric 3-wheel scooter was presented as a pre-production concept, with availability still an unknown. It features tilting front wheels that allow you to lean into curves in much the same way as the Piaggio carver we tried in 2007. This tilting action can be locked upright for improved low speed stability and means riders can come to a dead stop and not put their feet on the floor.

The LED headlight has handlebars coming straight out of it, and a chrome-encircled color display faces the rider. Under a faux leather bench seat with enough room for two are two swappable batteries for a range of 100 km (62) per charge, which could also offer the possibility of Gogoro-like hotswap stations being set up, though the batteries here are not from Gogoro. The cargo trunk is big enough to stow away a helmet and other belongings too.

The rear wheel hub motor should be good for up to 80 km/h (50 mph) top speed, and stopping power comes courtesy of a foot brake on the foot plate, and a brake lever on the handlebar. Estimated cost when it does go up for sale is €4,900 (US$5,620).

The first of the two electric kickscooters to be added to Micro’s line is the Micro-commuter, which is reckoned to be about half the size of others out there, and 30 percent lighter. Rather than install the batteries under the deck, this one features a removable battery pack mounted to the handlebars. It even has a built-in torch so it can double as a headlight when in place. This ride has a 20 km/h (12 mph) top speed, 10 km (6.2 mi) per charge range, and will be available mid-2020.

The Micro-explorer could be attractive to ride-share companies, given that it’s been built to last for at least 1,000 km (620 mi). It rocks built-in suspension at both wheels, an integrated status display in the handlebar, and a twist throttle that can be turned forward to slow the e-kickscooter down while recharging the battery. The 500-W peak motor delivers a top speed of 25 km/h (15.5 mph). This model will be available from May for around €1,000 (US$1,150).

–
(For the source of this, and many other equally intriguing articles, and to see 12 pictures, please visit: https://newatlas.com/automotive/microlino-microletta-electric-mobility/)