It’s a man’s world, or so the old saying goes. Though women in history haven’t always been able to fight in wars, publish books, or live adventurous lives, that has never stopped women disguised as men from stepping up to the plate and taking care of business. Women who pretended to be men have helped win wars, shape nations, and set precedents for everything women are capable of.

Cross-dressing has a long list of historical purposes. Though the public opinion and legality of cross-dressing has fluctuated throughout history, men and women have both been documented switching up their genders for a variety of purposes, including romance, espionage, or just pure fun. Though, more often than not, the women who disguised themselves as men, including many on this list, swapped genders in order to avoid persecution while going about their game-changing business. Some of these women disguised themselves as men for a single battle, while others practically lived out their entire lives as the opposite sex. Whatever their reason, we should just be thankful for the power of the pixie cut and the fake mustache. As RuPaul has so wisely taught us, gender is but a construct, baby!

Before she was a legend, Joan of Arc was just your average 15th-century French peasant girl – worried about boys, her hair, the plague – you know, teen stuff. But one day, a handful of saints came to her in a vision, saying it was her duty to help lead France to victory over the English. Somehow, Joan found her way to court and was granted a military appointment, a.k.a. armor, a horse, and instructions to pretend she was a man. She was an exceptional military leader and King Charles VII was a great champion of her, but the Burgundians and the English saw her as a threat. She was captured by Burgundian forces in 1430 and rushed through a religious trial in 1431 which culminated in her execution. In 1456, she was exonerated, a decision which paved the way to her eventual sainthood.

Hua Mulan, Disguised as Her Father, Became a Kung-Fu Master

The classic Disney animated film Mulan (with a live-action reboot in the works) is actually based on an ancient Chinese ballad. In this tale, dated around 500 CE, China is invaded and Mulan joins the army in place of her elderly father. Mulan spends more than 10 years fighting and rising through the ranks. She travels far, meets many new friends, and develops a mastery of kung fu. Yet, when the war is over, she retires to her hometown and lives simply. Unfortunately, no historical evidence suggests the presence of a small, Eddie Murphy-esque dragon.

Though Hatshepsut never falsified her identity as a woman, she still certainly took matters of gender into her own hands. Hatshepsut was the second female pharaoh to rule Egypt, and is regarded as one of the kingdom’s greatest rulers of all time – male or female. While it was no secret she was a woman, Hatshepsut asserted her authority by decking herself out in full traditional pharaoh attire, including a Khat head cloth, kilt, and even a false beard. Why don’t more female politicians do this?

Rusty Kanokogi Disguised Herself and Won a Judo Championship

Rusty Kanokogi is best known for pioneering women’s judo in the United States. Kanokogi, born Rena Glickman in Brooklyn in 1935, began practicing judo in the 1950s – but found she was often discouraged from learning because she was a woman. In 1959, Kanokogi entered a judo championship disguised as a man and won the whole shebang. Unfortunately, she was forced to return her medal after her identity was revealed. Kanokogi then left the United States for Japan, where she became the first woman to train with the men of the Kodokan – the judo world headquarters. Later, she was instrumental in making women’s judo an Olympic sport. She coached the first women’s judo Olympic team at the 1988 Olympics.

Hannah Snell was born in England in 1723 but spent her life disguised as a male soldier named James Gray. During her stint with the Marines, Snell was wounded in battle 12 times, including a hit to the groin. How she managed to recover from injury and mask her true identity is still unknown. Eventually, though, Snell revealed her gender, was honorably discharged, granted a pension (nice!), and opened a pub called The Female Warrior.

George Eliot Wrote as a Man and a Woman, Proving Great Literature Knows No Gender

British-born Mary Ann Evans was already a distinguished writer and editor when, in the mid-1850s, she wrote her first full-length novel under the pen name George Eliot. Her foremost reason for doing so was an attempt to be taken seriously as a writer because most of the fiction being published by women at the time was regarded as “silly.” Her plot worked, of course, as Middlemarch and her many other works are regarded as some of the finest Victorian literature ever written.

Marina the Monk’s Male Disguise Was So Convincing, She ‘Fathered’ a Child

Marina was still a young woman when she pledged to live her life as a male monk in the 8th century CE. Known as “Marinus,” she was incredibly devout and her true identity went unquestioned. So much so that, when the local innkeeper’s daughter became pregnant, she claimed Marinus was the father. In perhaps the greatest parenting move of the 8th century, Marinus accepted responsibility for the child and raised it as her own until her death.

In 1967, Kathrine Switzer was just 20 years old when she became the first registered female participant in the legendary Boston Marathon. Women had been allowed to unofficially participate in the race in previous years, but they were not officially recognized by the Boston Athletic Association. Switzer used the androgynous nickname “K.V.” to sign her registration paperwork, though she said this was not done with the intent of misleading race officials.

Nevertheless, Switzer’s identity was inevitably discovered and caused an uproar. One race official attempted to physically remove her from the race and was pushed aside by her boyfriend, who was running alongside her. The moment was caught on camera in an iconic series of photos by The Boston Herald. Another official ever-so-eloquently stated, “If that girl were my daughter, I would spank her.” It wasn’t until 1972 that women were officially allowed to run in the Boston Marathon.

In 1857, Sarah Edmonds left Canada for Hartford, CT, in order to escape an abusive father who had always wanted a son. As a woman alone in a new country, Edmonds disguised herself as “Franklin Thompson” and worked as a traveling Bible salesman. When the Civil War started up, Edmonds enlisted and served many roles, including nurse, courier, and spy. She only revealed her true identity to her comrades during a reunion after the war. Surprisingly, her old war buddies accepted this shocking revelation and even helped Edmonds score a soldier’s pension from the U.S. government. Take that, dad! 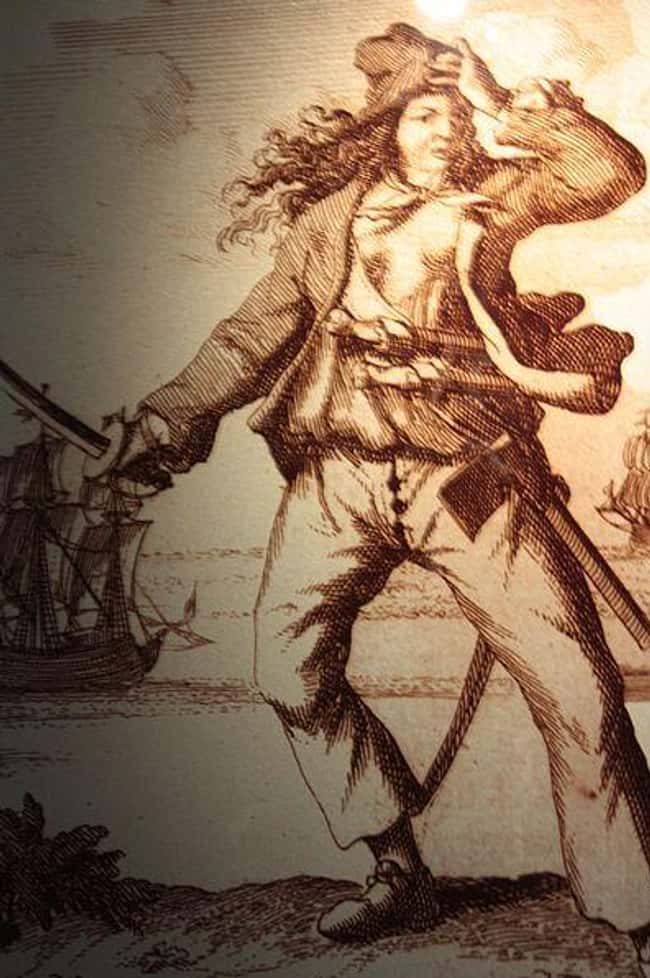 Photo: Stephencdickson/Wikimedia Commons–
–
Mary Read, born in 1690, was one of only two women to ever be convicted of piracy in the heyday of buccaneering (the other being Anne Bonny). Read spent much of her early life disguised as a male, and even joined the British military posing as “Mark Read.” After her military ship was captured by pirates, Read was forced to join them. Though she didn’t join them willingly at first, she learned to enjoy the pirate life and never went back. She was eventually captured, tried, and sentenced to death, but died before she could be executed.

Massachusetts-born Deborah Sampson was so determined to fight for the fledgling United States in the Revolutionary War that she tried not once but twice to enlist. Her second attempt, using the identity “Robert Shirtliffe,” proved successful, and Sampson fought for almost two years. Perhaps her impressive 5’7″ height – a full 7 inches taller than the average woman during that time – helped her pull off the masculine disguise. But what one really can’t help but wonder is why her character didn’t get a starring role in Hamilton.

Ulrika Eleonora Stålhammar, along with her bevy of sisters, was born in Sweden in the late 1600s. The death of her parents, family debt, and a sketchy marriage arrangement caused Stålhammar to disguise herself as a man and flee her hometown. Using the name “Vilhelm Edstedt,” Stålhammar joined the Swedish military to fight in the Great Northern War and even rose through the ranks to become a corporal. Rumors began to spread about her identity and, in particular, her marriage to a woman named Maria. She faced criminal charges and a thorough public trial which could have ended with her execution, but Stålhammar received just one month in jail. She was also pilloried and exiled, which is not great, but she and Maria reunited and spent the rest of their lives living together in the country.

(For the source of this, and many other equally intriguing articles, please visit: https://www.ranker.com/list/women-disguised-as-men-in-history/katiefustich/)