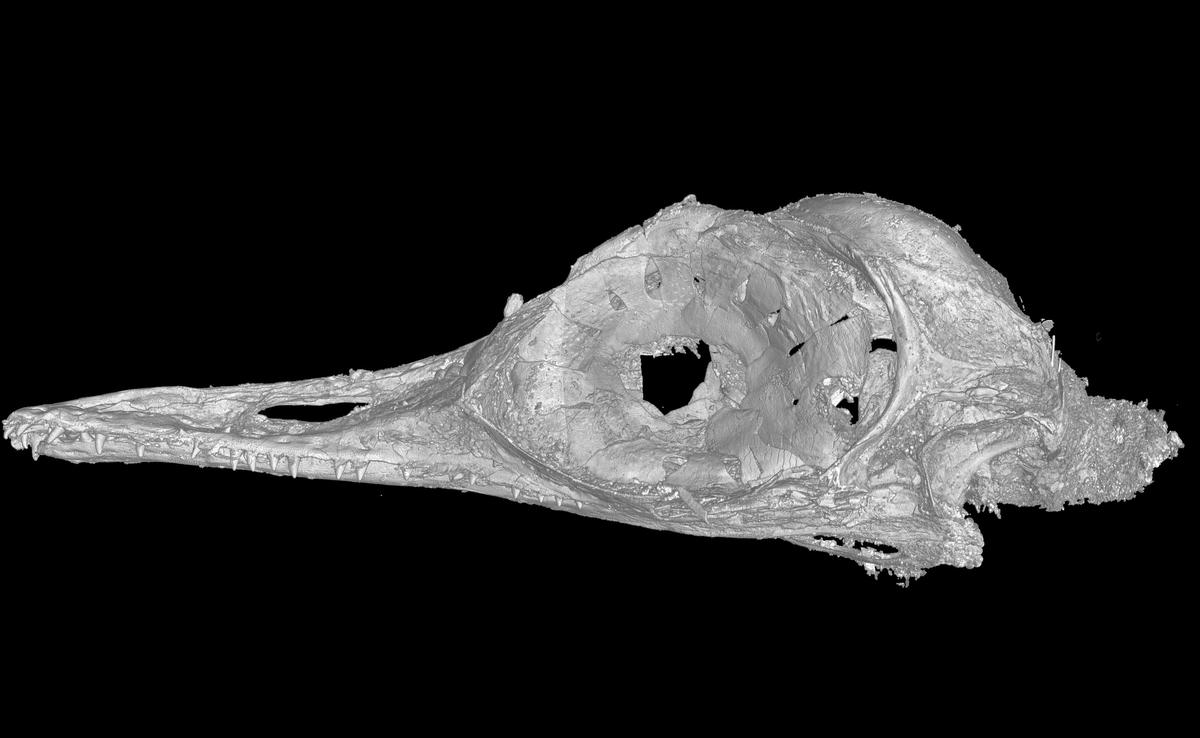 A CT scan of the skull of Oculudentavis, which means eye-tooth-bird, so named for its distinctive features.  Lars Schmitz.

A tiny, 99-million-year-old skull found in a piece of Burmese amber in Myanmar may not only be the smallest known dinosaur of the Mesozoic era, but it could also provide new insights into the evolution of birds. Called Oculudentavis khaungraae, it was the size of a hummingbird and shared reptilian and bird-like features.

Finding ancient creatures in bits of amber is common and even a bit old hat, but such finds have almost always been insects or other arthropods. What’s really rare is finding a vertebrate animal preserved in such a fashion – to say nothing of a dinosaur.

Discovered and studied by an international team led by Lars Schmitz, associate professor of biology at the W.M. Keck Science Department at Scripps College, the fully-grown skull came from a dinosaur that was about the size of a modern bee hummingbird, which is the smallest living bird, weighing under two grams (0.07 oz) and reaching a length of 6.1 cm (2.4 in).

“Amber preservation of vertebrates is rare, and this provides us a window into the world of dinosaurs at the lowest end of the body-size spectrum,” says Schmitz. “Its unique anatomical features point to one of the smallest and most ancient birds ever found.”

Using high-resolution synchrotron scans that produce tomographic images a bit like those of an MRI, the scientists were able to study the skull of Oculudentavis khaungraae without removing it from its amber casing. What they found was that the tiny dinosaur had eyes that indicate that it was active during the day and slept at night, though the eye structure is very similar to those of modern lizards.

In addition, Oculudentavis had a strong, fused skull and rows of a hundred tiny teeth, indicating that it was a predator that probably fed on small insects. According to the team, this combination of unusual features in such a tiny dinosaur sheds light not only on how the smallest types of dinosaurs lived but also suggests that the earliest birds may have evolved to be very small much earlier than previously believed.

“No other group of living birds features species with similarly small crania in adults, says Schmitz. “This discovery shows us that we have only a small glimpse of what tiny vertebrates looked like in the age of the dinosaurs.”

The research was published in Nature.

The video below discusses Oculudentavis khaungraae.

(For the source of this, and many other equally interesting articles, please visit: https://newatlas.com/science/hummingbird-sized-dinosaur-skull-amber-bird-evolution/)