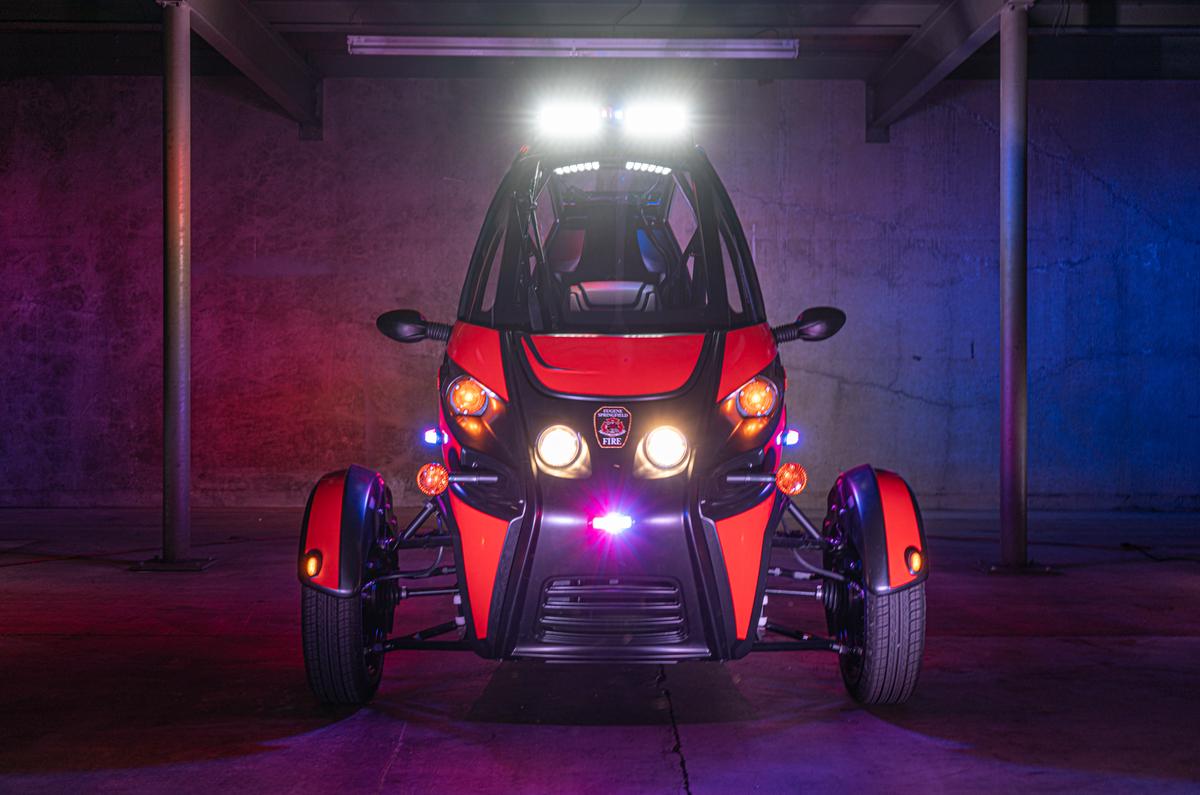 The Arcimoto Rapid Responder is now being tested by the Eugene Springfield Fire Department ahead of production later in 2021.  Arcimoto.
–

A little over a year ago, Oregon’s Arcimoto revealed a special version of its battery-electric three-wheeler designed for first responders. The company inked an agreement with the Eugene Springfield Fire Department to test the vehicles, and now that pilot program has begun.

“In an emergency, every second counts, and yet, in every major city, large emergency vehicles get bogged down in traffic, wasting valuable time and emitting excessive amounts of carbon,” said Arcimoto CEO Mark Frohnmayer. “With its maneuverable small footprint and ability to go where big trucks can’t, we believe the Rapid Responder can help departments cut carbon emissions and fuel costs while improving response times.”

Based on the same modular platform as Arcimoto’s Fun Utility Vehicle, the Rapid Responder seats two under a canopy roof, has no doors for easy access and comes with integrated light bar and siren so other road users know to make way. There’s also a roof-mounted equipment rack, rear cargo department, and 360-degree lights to illuminate the scene of an accident or incident.

“At Eugene Springfield Fire, we pride ourselves on being a progressive organization that is always in search of innovative new ways to improve our services,” added Eugene Springfield Fire Chief Chris Heppel. “In 2019, we responded to more than 40,000 emergency calls, and a large number of those could have been better serviced using the Arcimoto Rapid Responder. We are extremely proud to be the first firehouse in the world to deploy this cutting-edge vehicle, and look forward to working with Arcimoto in this pilot program to create a world-class sustainable EMS solution.”

Eugene Springfield isn’t the only Fire Department in the US to opt for green and quiet emergency vehicles. Last month, Los Angeles Fire Department agreed to buy an electric fire engine from Austria’s Rosenbauer, which will be a custom version of its Concept Fire Truck that will have 100-kW batteries for around two hours of fully electric operation, and a backup diesel generator for extended operations.

Arcimoto is expected to reveal full specs and pricing ahead of Rapid Responder production later in the year.

Paul Ridden
While Paul is loath to reveal his age, he will admit to cutting his IT teeth on a TRS-80 (although he won’t say which version). An obsessive fascination with computer technology blossomed from hobby into career before hopping over to France for 10 years, where he started work for New Atlas in 2009. Now back in his native Blighty, he serves as Managing Editor in Europe.

(For the source of this, and many other equally interesting articles, and to see all six images associated with it, please visit: https://newatlas.com/urban-transport/eugene-springfield-fire-department-arcimoto-rapid-responder/)