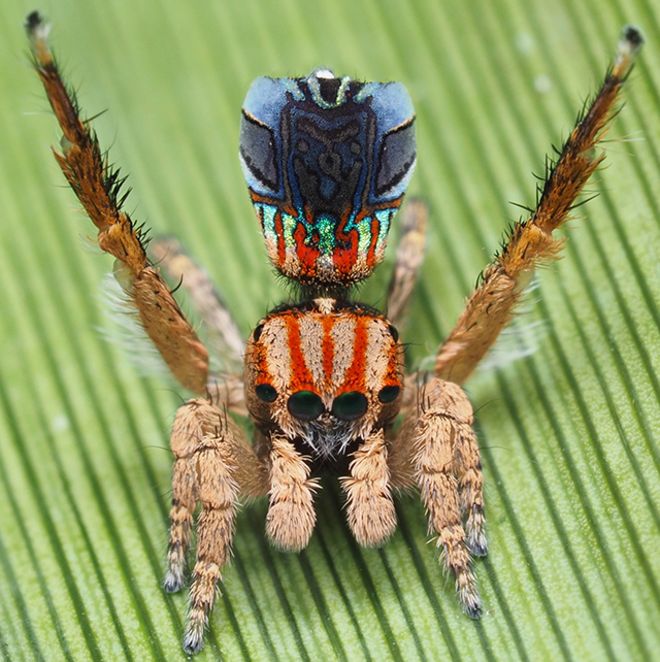 Seven new peacock spiders have been described in the journal Zootaxa.

And just like their cousins in the Maratus genus, they all live in Australia and they all feature those amazing iridescent colors that the males will flaunt during courtship.

The man behind the descriptions is Museums Victoria‘s Joseph Schubert, a 22-year-old peacock spider specialist.

He’s now written up 12 of the 85 known species in this group. He often gets sent specimens to identify, but also conducts fieldwork.

“My favorite species would have to be Maratus constellatus,” he said.

“I ventured all the way to Kalbarri to find this species which is about a seven-hour drive north of Perth. The patterns on the abdomen to me just look so much like Starry Night by van Gogh, hence the name constellatus which means starry in Latin.

“A few of the spiders in this paper were named after the people who had discovered them. A lot of the species are actually discovered by citizen scientists who’d documented the locality data and taken photos of the spiders and sent images to me. Considering how many peacock spider species have been discovered in the past few years, I certainly think that there are more out there to be found.”

Peacock spiders are generally very small, about the size of a grain of rice. It’s the males that sport the ostentatious coloring; females have a more mottled look made up of browns, blacks and beiges.

Males will wave their abdomens and legs during a courtship dance. Some even have flaps that can be extended like a fan – hence the association with peacock birds.

There has been a flurry of new species discoveries in recent years, and given their popularity it’s likely many more previously unrecognized species will be identified in the future as people go looking for them.

(For the source of this, and many other equally intriguing articles, please visit: https://www.bbc.com/news/science-environment-52075609/)