An artist’s rendering of West Antarctica, which would have been a swampy forest around 90 million years ago.  Alfred-Wegener-Institut, James McKay/CC-BY 4.0.
–

It’s hard to imagine Antarctica as anything other than a freezing lifeless landscape, but that wasn’t always the case. Now, an international team has recovered a 90-million-year old soil sample that paints the most detailed picture of ancient Antarctica ever found, revealing a swampy rainforest and balmy temperatures.

According to the study, during the peak of the Age of the Dinosaurs, West Antarctica was covered in dense vegetation, rivers and swamps. The annual average air temperature was around 12 °C (53.6 °F), and during summer that average went up to a pleasant 19 °C (66.2 °F). Rainfall amounts and intensity were similar to the lowlands of places like Wales.

The researchers made this startling discovery by studying a sediment core drilled from deep beneath the ocean floor, in the Amundsen Sea off the west coast of Antarctica. A certain section appeared to be extremely well-preserved forest soil.

“During the initial shipboard assessments, the unusual coloration of the sediment layer quickly caught our attention; it clearly differed from the layers above it,” says Johann Klages, first author of the study. “Moreover, the first analyses indicated that, at a depth of 27 to 30 m (88.6 to 98.4 ft) below the ocean floor, we had found a layer originally formed on land, not in the ocean.”

When they studied this layer with X-ray CT scans, the researchers found a remarkably intact sample of an ancient forest floor. The soil was made up of fine-grained silt and clay, with individual cell structures visible. Pollen and spores from plants were found throughout, including the first evidence of flowering plants in Antarctica. And most impressively, a network of tree roots twisted their way through the whole sample.

“The numerous plant remains indicate that 93 to 83 million years ago the coast of West Antarctica was a swampy landscape in which temperate rainforests grew – similar to the forests that can still be found, say, on New Zealand’s South Island,” says Ulrich Salzmann, co-author of the study.

From this picture of what plants covered Mid-Cretaceous West Antarctica, the team then calculated what the climate was like in the area at the time. Along with assumptions based on conditions that similar plants grow in now, the team searched for indicators of temperature and rainfall in the soil.

But how did such a pleasant climate come about so far south? Next, the team punched those parameters into a climate model to see what conditions were needed to sustain that kind of temperature and precipitation.

According to their calculations, the whole Antarctic continent must have been covered in vegetation, there had to be no ice sheets at all, and the carbon dioxide concentration had to be much higher than previously thought for the time. 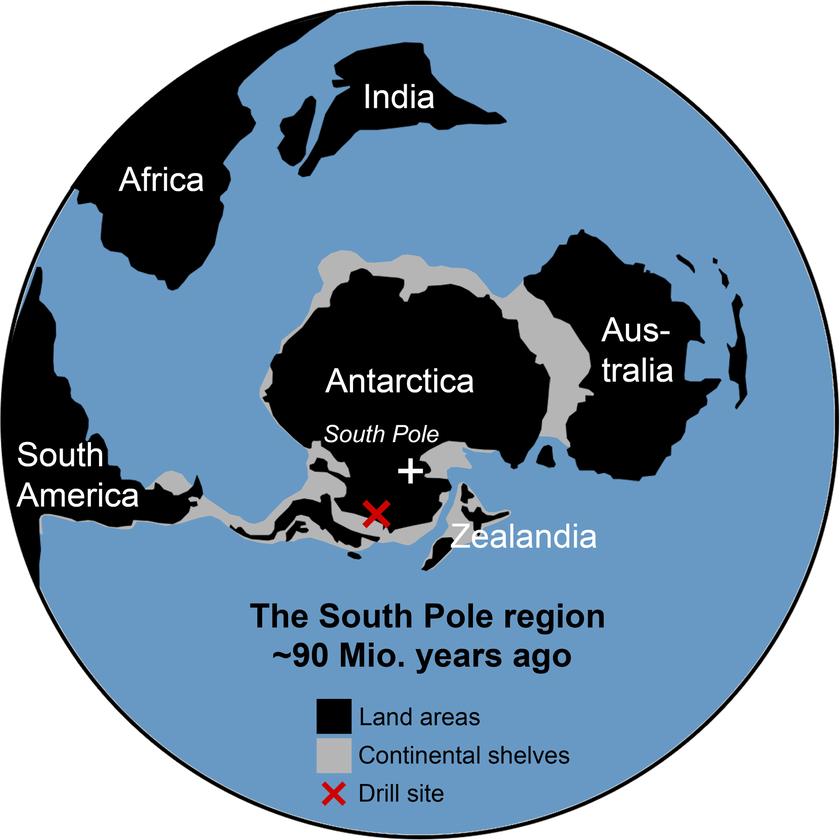 A basic map of the South Pole region at the time of the sediment core, around 90 million years ago.

“Before our study, the general assumption was that the global carbon dioxide concentration in the Cretaceous was roughly 1,000 parts per million (ppm),” says Gerrit Lohmann, co-author of the study. “But in our model-based experiments, it took concentration levels of 1,120 to 1,680 ppm to reach the average temperatures back then in the Antarctic.”

This finding has several implications. For one, scientists may have to revisit their Cretaceous-era climate models. It also raises the question of how the climate cooled to create the Antarctica we know today.

(For the source of this, and many other quite interesting articles, and to see all eight images associated with it, please visit: https://newatlas.com/environment/ancient-antarctica-sediment-warm-rainforest/)