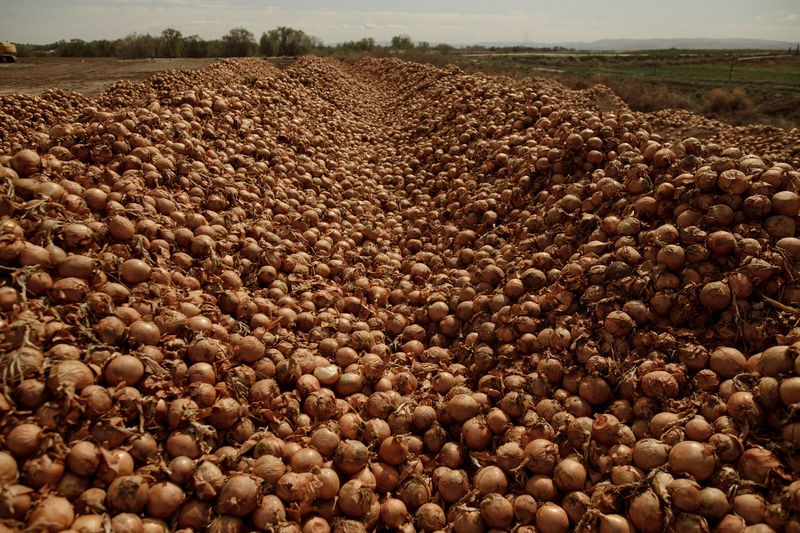 A field of onions waiting to be buried in Nyssa, Idaho on 2020 Apr 10. (Joseph Haeberle / The New York Time)

In Wisconsin and Ohio, farmers are dumping thousands of gallons of fresh milk into lagoons and manure pits. An Idaho farmer has dug huge ditches to bury 1 million pounds of onions. And in South Florida, a region that supplies much of the Eastern half of the United States with produce, tractors are crisscrossing bean and cabbage fields, plowing perfectly ripe vegetables back into the soil.

After weeks of concern about shortages in grocery stores and mad scrambles to find the last box of pasta or toilet paper roll, many of the nation’s largest farms are struggling with another ghastly effect of the pandemic. They are being forced to destroy tens of millions of pounds of fresh food that they can no longer sell.

The closing of restaurants, hotels and schools has left some farmers with no buyers for more than half their crops. And even as retailers see spikes in food sales to Americans who are now eating nearly every meal at home, the increases are not enough to absorb all of the perishable food that was planted weeks ago and intended for schools and businesses.

The amount of waste is staggering. The nation’s largest dairy cooperative, Dairy Farmers of America, estimates that farmers are dumping as many as 3.7 million gallons of milk each day. A single chicken processor is smashing 750,000 unhatched eggs every week.

Many farmers say they have donated part of the surplus to food banks and Meals on Wheels programs, which have been overwhelmed with demand. But there is only so much perishable food that charities with limited numbers of refrigerators and volunteers can absorb.

And the costs of harvesting, processing and then transporting produce and milk to food banks or other areas of need would put further financial strain on farms that have seen half their paying customers disappear. Exporting much of the excess food is not feasible either, farmers say, because many international customers are also struggling through the pandemic and recent currency fluctuations make exports unprofitable.

“It’s heartbreaking,” said Paul Allen, co-owner of R.C. Hatton, who has had to destroy millions of pounds of beans and cabbage at his farms in South Florida and Georgia.

The widespread destruction of fresh food — at a time when many Americans are hurting financially and millions are suddenly out of work — is an especially dystopian turn of events, even by the standards of a global pandemic. It reflects the profound economic uncertainty wrought by the virus and how difficult it has been for huge sectors of the economy, like agriculture, to adjust to such a sudden change in how they must operate.

Even as Allen and other farmers have been plowing fresh vegetables into the soil, they have had to plant the same crop again, hoping the economy will have restarted by the time the next batch of vegetables is ready to harvest. But if the food service industry remains closed, then those crops, too, may have to be destroyed.

Farmers are also learning in real time about the nation’s consumption habits.

The quarantines have shown just how many more vegetables Americans eat when meals are prepared for them in restaurants than when they have to cook for themselves.

Myers said there were no good solutions to the fresh food glut. After his largest customer — the restaurant industry — shut down in California and New York, his farm started redistributing onions from 50-pound sacks into smaller bags that could be sold in grocery stores. He also started freezing some onions, but he has limited cold-storage capacity.

With few other options, Myers has begun burying tens of thousands of pounds of onions and leaving them to decompose in trenches.

“There is no way to redistribute the quantities that we are talking about,” he said.

Over the decades, the nation’s food banks have tried to shift from offering mostly processed meals to serving fresh produce, as well. But the pandemic has caused a shortage of volunteers, making it more difficult to serve fruits and vegetables, which are time-consuming and expensive to transport.

“To purchase from a whole new set of farmers and suppliers — it takes time, it takes knowledge, you have to find the people, develop the contracts,” said Janet Poppendieck, an expert on poverty and food assistance.

The waste has become especially severe in the dairy industry, where cows need to be milked multiple times a day, regardless of whether there are buyers.

Major consumers of dairy, like public schools and coffee shops, have all but vanished, leaving milk processing plants with fewer customers at a time of year when cows produce milk at their fastest rate. About 5% of the country’s milk supply is currently being dumped and that amount is expected to double if the closings are extended over the next few months, according to the International Dairy Foods Association.

Before the pandemic, the Dairymens processing plant in Cleveland would produce three loads of milk, or around 13,500 gallons, for Starbucks every day. Now the Starbucks order is down to one load every three days.

For a while after the pandemic took hold, the plant collected twice as much milk from farmers as it could process, keeping the excess supply in refrigerated trailers, said Brian Funk, who works for Dairymens as a liaison to farmers.

But eventually the plant ran out of storage. One night last week, Funk worked until 11 p.m., fighting back tears as he called farmers who supply the plant to explain the predicament.

“We’re not going to pick your milk up tomorrow,” he told them. “We don’t have any place to put it.”

One of the farms that got the call was the Hartschuh Dairy Farm, which has nearly 200 cows on a plot of land in northern Ohio.

A week ago, Rose Hartschuh, who runs the farm with her family, watched her father-in-law flush 31,000 pounds of milk into a lagoon. It took more than an hour for the milk to flow out of its refrigerated tank and down the drain pipe.

For years, dairy farmers have struggled with low prices and bankruptcies. “This is one more blow below the belt,” Hartschuh said.

To prevent further dumping, farming groups are trying everything to find places to send the excess milk — even lobbying pizza chains to increase the amount of cheese on every slice.

But there are logistical obstacles that prevent dairy products from being shifted neatly from food service customers to retailers.

At many dairy processors, for example, the machinery is designed to package shredded cheese in large bags for restaurants or place milk in small cartons for schools, rather than arrange the products in retail-friendly containers.

To repurpose those plants to put cheese in the 8 oz. bags that sell in grocery stores or bottle milk in gallon jugs would require millions of dollars in investment. For now, some processors have concluded that spending the money isn’t worth it.

“It isn’t like restaurant demand has disappeared forever,” said Matt Gould, a dairy industry analyst. “Even if it were possible to re-format to make it an 8-ounce package rather than a 20-pound bag, the dollars and cents may not pan out.”

Those same logistical challenges are bedeviling poultry plants that were set up to distribute chicken to restaurants rather than stores. Each week, the chicken processor Sanderson Farms destroys 750,000 unhatched eggs, or 5.5% of its total production, sending them to a rendering plant to be turned into pet food.

Last week, the chief executive of Sanderson Farms, Joe Sanderson, told analysts that company officials had even considered euthanizing chickens to avoid selling them at unprofitable rates, though the company ultimately did not take that step.

In recent days, Sanderson Farms has donated some of its chicken to food banks and organizations that cook meals for emergency medical workers. But hatching hundreds of thousands of eggs for the purpose of charity is not a viable option, said Mike Cockrell, the company’s chief financial officer.

“We’re set up to sell that chicken,” Cockrell said. “That would be an expensive proposition.”

c.2020 The New York Times Company
–
(For the source of this, and many other equally important articles, please visit: https://www.chicagotribune.com/coronavirus/ct-nw-nyt-coronavirus-food-waste-20200413-x5n6sbmrh5an3cilo6hxozrkj4-story.html)