High-speed photography shows a sneeze can blast saliva and mucus well beyond current social distancing guidelines, and tiny droplets can remain in the air longer than thought. 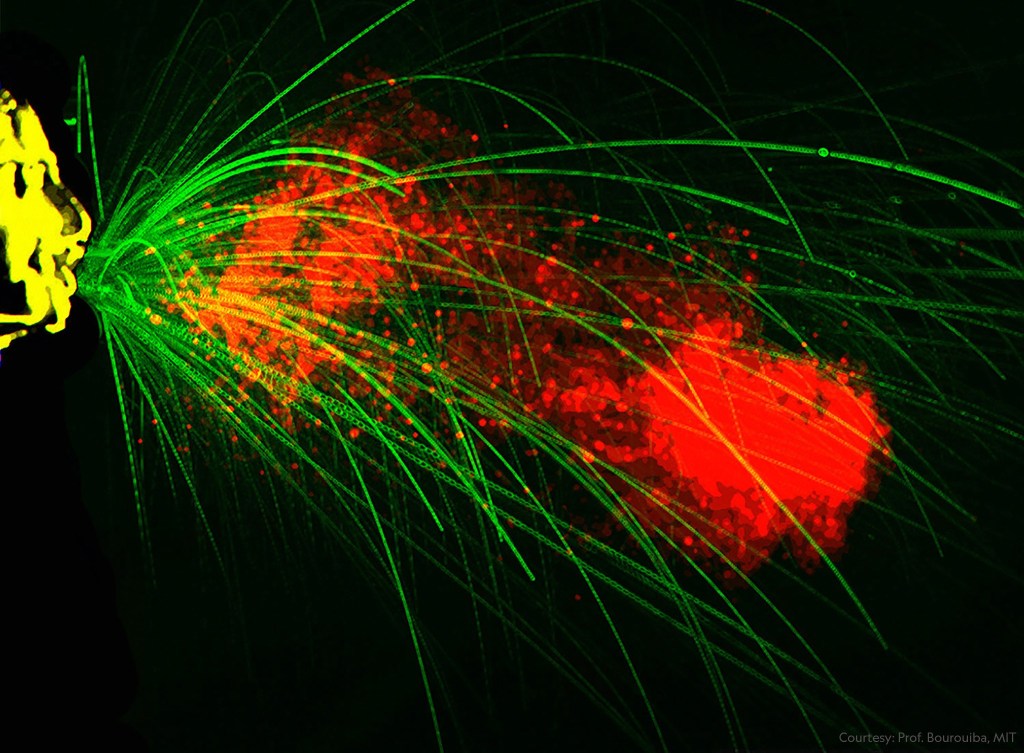 High-speed video imaging colored to reveal the two main components of a sneeze show a shower of larger droplets, green, whose trajectories can extend up to two meters from the person sneezing, yellow, and a cloud, red, made of a mixture of smaller droplets suspended in moist, warm gas. Pathogen-bearing droplets can be suspended in the air for not just seconds, but minutes, and can travel up to 27 feet.  Image by Lydia Bourouiba, MIT.

–
For anyone who grows anxious at the sound of a sneeze or a cough these days, Lydia Bourouiba’s research offers little comfort.

Bourouiba, a fluid dynamics scientist at MIT, has spent the last few years using high-speed cameras and light to reveal how expulsions from the human body can spread pathogens, such as the novel coronavirus. Slowed to 2,000 frames per second, video and images from her lab show that a fine mist of mucus and saliva can burst from a person’s mouth at nearly a hundred miles an hour and travel as far as 27 feet. When the sternutation is over, a turbulent cloud of droplet-containing gas can remain suspended for several minutes, depending on the size of the droplets.

Understanding exactly how these clouds travel and disperse is critical to containing infectious respiratory diseases such as COVID-19. Many knowledge gaps remain over how it spreads. Bourouiba’s research highlights an ongoing scientific debate about how the new coronavirus moves through the air, suggesting such airborne transfer may be more likely than previously thought.

Guidance from the U.S. Centers for Disease Control and Prevention, which recommends people stay at least six feet apart from one another, likely falls short because it doesn’t take fluid dynamics into account, Bourouiba says. She and her colleagues have documented a droplet from a sneeze traveling more than four times that distance. While sneezing is not one of the common symptoms of COVID-19, an asymptomatic person with seasonal allergies or a random sneeze could still spread the germ.

When a virus that infects the respiratory system leaves the human body, it’s contained within a droplet of saliva and mucus. For decades, scientists have categorized these as either large droplets—larger than five to 10 microns—or small droplets, called aerosols.

The larger the droplet, the more likely it is to quickly fall to the ground or on nearby objects after it’s expelled. If a person touches these droplets and then rubs their face, they can contract the virus, which is why it’s important for people to frequently wash their hands. Smaller droplets, however, are less predictable. They can travel greater distances, though in the right conditions, they will quickly evaporate.

Agencies such as the CDC and the World Health Organization classify diseases as being predominantly spread by large particles or small particles; COVID-19 is believed to spread primarily through large respiratory particles.

Following a sneeze, high-speed video imaging captured a waterfall of large droplets, top, and a lingering cloud of small droplets, below, that can spread pathogens even further.  Image by Lydia Bourouiba, MIT.

–
But Bourouiba’s research suggests that dichotomy may be arbitrary. Her study indicates that a sneeze can expel droplets of various sizes 23 to 27 feet from a nose. Exactly how long they remain before evaporating depends on several conditions, including humidity and temperature. Aerosols typically dry out more quickly, but small virus-containing droplets can last for minutes trapped inside the warm, moist cloud of a sneeze.
–
And experts still don’t know exactly how much of the coronavirus is required to make someone sick.“We don’t have an infectious dose yet, so how many particles would you have to be exposed to? It’s hard to say,” says Joshua Santarpia of the University of Nebraska Medical Center. Studies of influenza show that not all transmission routes are equally likely to make you sick, and larger droplets carry larger doses of virus, making infection more likely.
–
“The jury is still out on whether COVID-19 spreads by aerosols,” says Ben Cowling, an epidemiologist at the University of Hong Kong. In a study published earlier this month in Nature Medicine, Cowling and his research team found that influenza can spread through aerosols, and he suspects the novel coronavirus may also spread through the air across short distances.
–
“Influenza in many ways is similar,” says Donald Milton, an aerosol transmission expert from the University of Maryland. “We’ve been studying influenza for a hundred years, and there’s still no agreement on how it’s transmitted because it’s hard to nail this down.”
–

Much of what we know about how this coronavirus spreads through the air is based on samples collected from rooms of people infected with COVID-19. But conducting these types of studies comes with uncertainty.

“It’s pretty hard to collect virus from the air because collecting fine particles through a filter tends to dry them out,” Milton says. “All you can tell is there’s RNA there, and it’s not clear that it’s still infectious.”

Health experts believe it is unlikely that activities that cause heavy breathing, such as running or biking, increase the chances of transmission, but a study published recently in the New England Journal of Medicine found that loud talking can expel respiratory droplets up to three feet from the speaker.

Masks may help reduce spread, but they are most effective when worn by those carrying the virus, and they must be used properly to protect others. There is currently no evidence that wearing a mask prevents healthy people from contracting respiratory infections, according to the WHO. However, people who show no symptoms from COVID-19 could still spread the disease, so the CDC has recommended the use of cloth masks in public.

Given what Bourouiba’s research shows about the extraordinary distances people can launch respiratory droplets, one of the most important things everyone can do is make sure to cover their nose and mouth when they sneeze or cough.

Sarah Gibbens is a digital writer at National Geographic.

For the source of this, and many other equally intriguing articles, please visit: https://www.nationalgeographic.com/science/2020/04/coronavirus-covid-sneeze-fluid-dynamics-in-photos/)