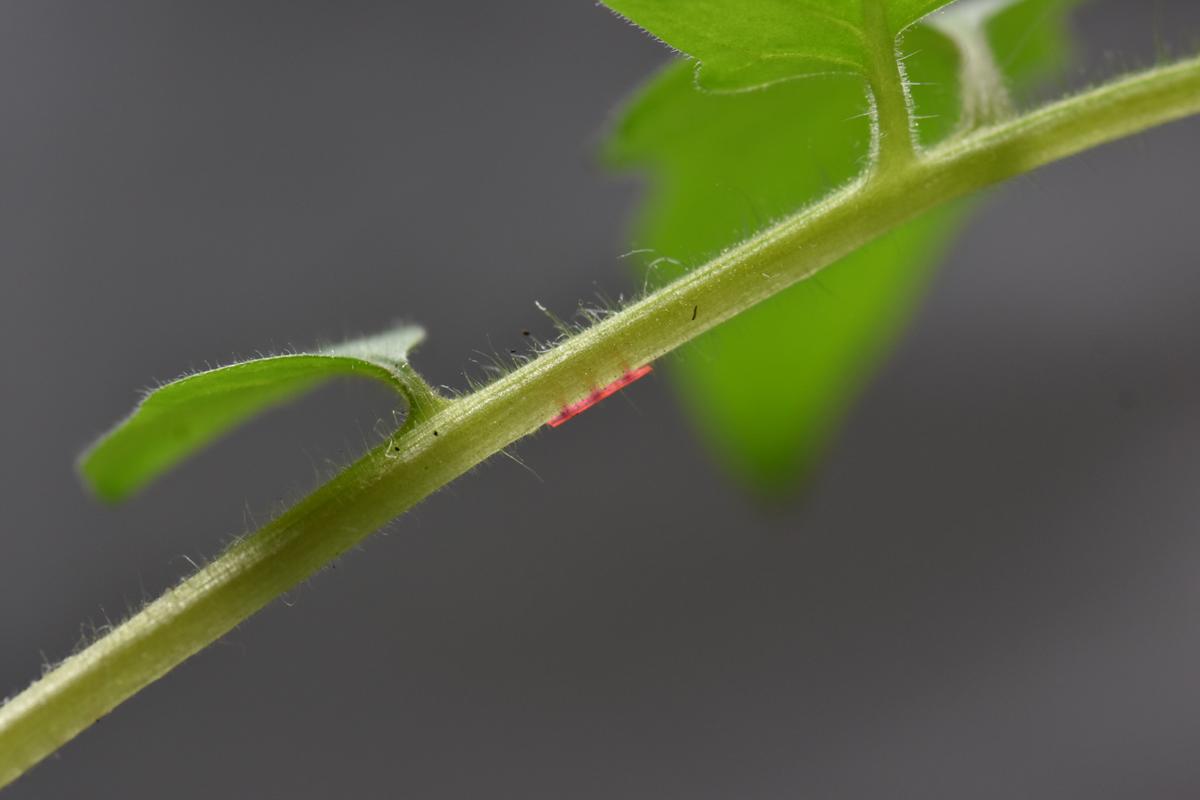 The microneedle patch (red) has been successfully trialed on plants such as tomatoes.  MIT.
–

When it comes to safer, less painful, slow-release alternatives to the hypodermic injection of medications, “microneedle patches” show a lot of promise. Now, MIT scientists have adapted the technology for use on plants.

Existing microneedle patches – the type made for humans – typically consist of a small square of material, with an array of tiny, sharp stud-like needles on its underside.

Made of biocompatible substances such as silk, these needles are loaded with the medication in question, and they painlessly pierce the top layer of skin when the patch is pressed against the body. They then dissolve, harmlessly releasing the medication into the interstitial fluid between the skin cells. From there, the drug makes its way into the bloodstream.

As compared to hypodermic needles, microneedle patches are considerably less painful, they pose less risk of infections or other injuries to the patient, and they can release medication over a sustained period instead of shooting it in all at once. Well, although plants don’t feel pain (that we know of), those selling points could otherwise be applied to patches made for them, too.

With that in mind, an MIT team designed a patch that can be placed on the stem, leaves, roots or other parts of larger plants, delivering substances such as pesticides directly into their vascular systems. Depending on the specific pesticide, taking such an approach can be much more effective than simply spraying a solution onto the leaves and waiting for it to be absorbed. And when compared to giving the plant a traditional hypodermic injection, using the patches is less fiddly, and not as harmful to the plant.

Although the plant microneedles are still made of silk, it’s not the same type of silk as that used in human-grade patches. This is because plants typically have less water inside of them than we do, so the needles need some help in dissolving. To that end, the silk that they’re made of is more hydrophilic (water-attracting), so it can make better use of what water there is. At the same time, though, it’s still tough enough to initially pierce the plant’s epidermis.

The technology has already been successfully used to inject tobacco and tomato plants with fluorescent particles, which could subsequently be seen moving from the plants’ roots up to their leaves. Down the road, it could be utilized to deliver not only pesticides, but also micronutrients or genes, for the development of genetically-modified crops.

It’s even possible that autonomous vehicles could one day be used to apply the microneedle patches to large numbers of plants in a field, saving agricultural workers from having to perform the task manually.

A paper on the research, which is being led by professors Benedetto Marelli and Jing-Ke-Weng, was recently published in the journal Advanced Science.

And just last year we heard about another microneedle patch that can be used to extract genetic material from plants, in order to determine which disease-causing organism is infecting them.

(For the source of this, and many other equally interesting and intriguing articles, please visit: https://newatlas.com/science/microneedle-patch-plants/)