The last of Newfoundland’s Beothuk was thought to have died in 1829 but new research indicates the bloodline did not die out – as Mi’kmaq tradition has always maintained. 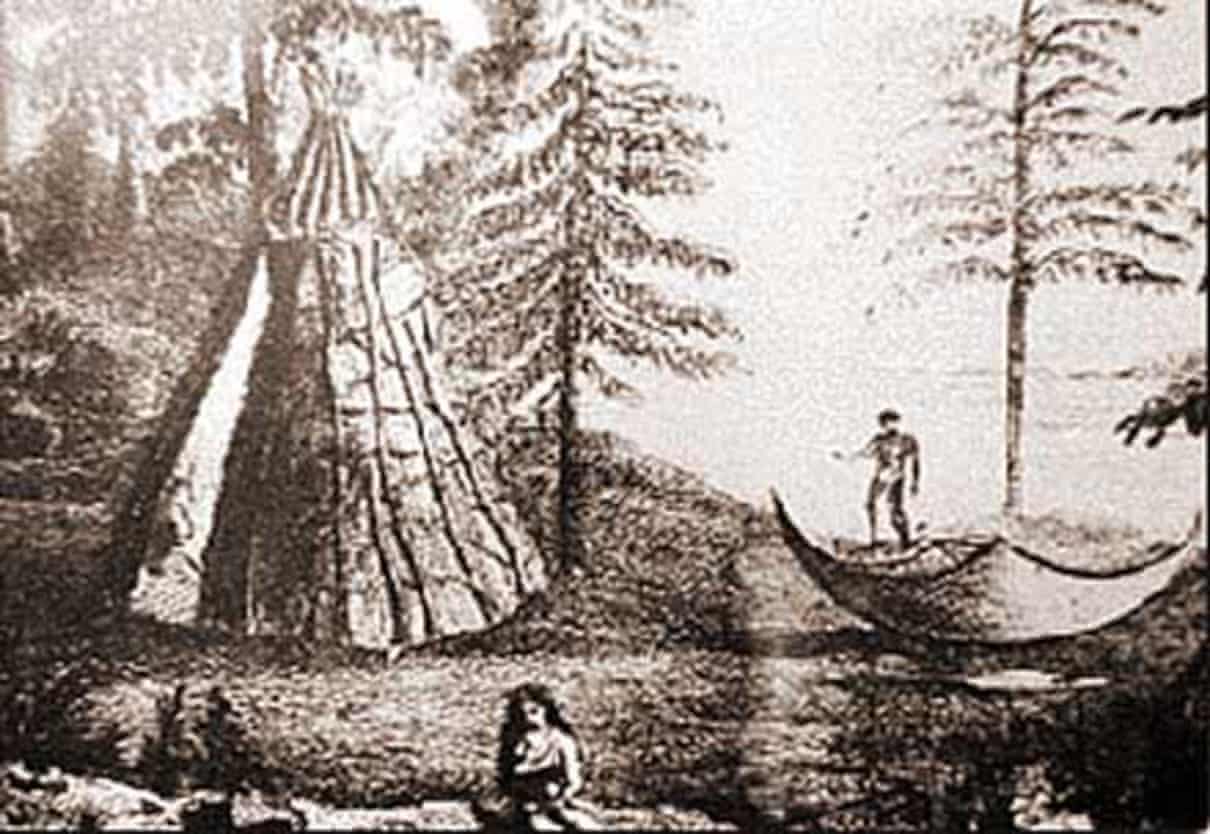 Drawing of a Beothuk camp by Major John Cartwright. Photograph: The Picture Art Collection/Alamy Stock Photo –
By Leyland Cecco in Toronto –
2020 May 10
–

When a woman named Shanawdithit died from tuberculosis in Newfoundland nearly 200 years ago, it was widely believed that her death marked a tragic end to her people’s existence.

For centuries, the Beothuk had thrived along the rocky shores of the island, taking on a near-mythical status as descendants of the first people encountered by Norse explorers in what is now Canada. But their population was devastated by decades of starvation and diseases, and when she died in 1829, Shanawdithit was believed to be the last of her line.

New research from Memorial University, however, has found Beothuk DNA probably still exists in people alive today – a discovery that would rewrite the history of the Newfoundland’s early inhabitants, even as it confirms the accuracy of local First Nations oral tradition.

“We’ve got good evidence that we have genetic continuity from the Beothic into modern persons,” said biologist Dr Steve Carr.

But while the finding would trigger a rethink for historians, the notion is not surprising to local Indigenous groups.

Mi’kmaq oral history has long asserted a shared ancestry with the original inhabitants of Newfoundland, and local First Nations have worked closely with Carr to help lend genetic evidence to their own traditions.

“There were always connections or friendly relations going back more than 200 years ago and when you mingle that way, periodically, things would happen,” said Chief Mi’sel Joe of the Miawpukek Mi’kamawey Mawi’omi, a Mi’kmaq First Nation in Newfoundland. 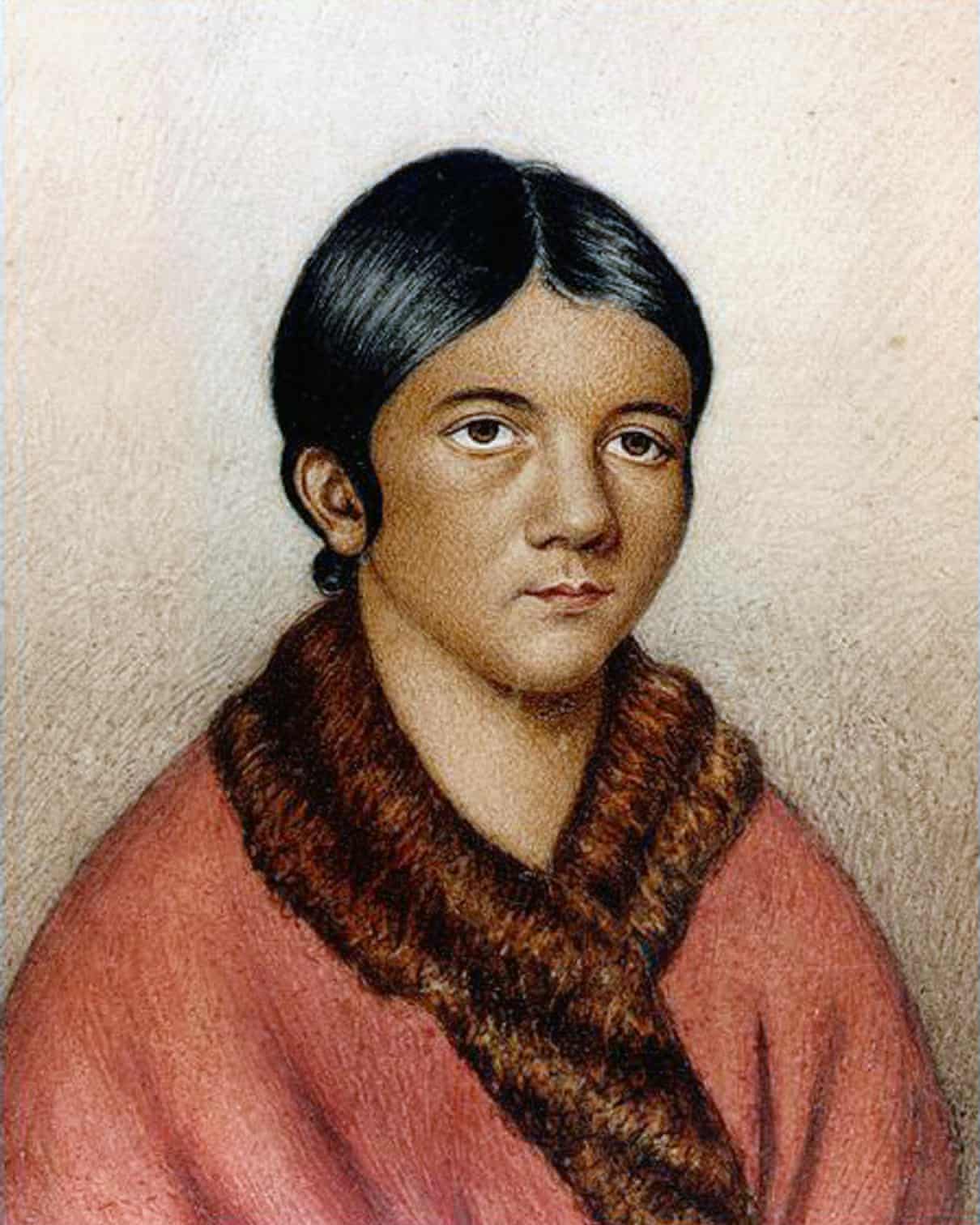 A miniature portrait titled ‘A female Red Indian of Newfoundland’ which is believed to be a portrait of Shanawdithit, though may possibly be a copy of a portrait of Demasduit. Photograph: The Picture Art Collection/Alamy Stock Photo

Historians believe the Beothuk are descended from a group that braved the ocean to cross from Labrador to Newfoundland thousands of years ago and whose distinct culture emerged around 1500 CE. At one point, as many as 2,000 Beothuk lived in communities scattered around Newfoundland.

For generations, they largely resisted and avoided relations with European settlers; the few interactions between the two were defined by violent encounters.

Early European settlements on the coast cut off Beothuk access to critical salmon and seals – forcing them to move further inland where they sustained themselves on caribou before finally succumbing to starvation and disease.

But Carr’s research suggests it was only a “cultural extinction”; their genetic legacy lives on.

In his study, Carr used DNA samples from Shanawdithit’s aunt and uncle – Demasduit and Nonosbawsut – whose skulls were taken to the Royal Museum in Scotland in 1828. After a long campaign by Chief Joe’s community, the remains were repatriated to Newfoundland in March.

After running samples through a genetics database, Carr was able to find his “smoking gun” – a man in Tennessee who was genetically similar to Nonosbawsut, but had no known Indigenous ancestry.

With only a small amount of data to work with, Carr hopes more samples will further demonstrate a connection.

“It’s easy to obtain the DNA sequence from somebody and you can count the number of similarities. That’s a very easy thing to do. But to reconstruct the patterns of a relationship is a very challenging problem,” said Carr, adding that further research into the known movement and connections between the Beothuk and Mi’kmaq was still required.

The findings also illustrate the way in which genetic uniqueness – in this case the distinct sequence of Beothuk mitochondrial genomes – can persist intact for generations. While humans share an immense amount of DNA that traces back millennia, said Carr, the intent of his research lay in teasing out the subtle and distinguishing differences between known groups.

“Academics are hard people to convince. They often have this mindset that ‘this the way it was’ – no matter what information we give them to the contrary,” he said.

He described a frustrating experience in a land claims court, where the adjudicator suggested the Mi’kmaq first arrived in Newfoundland in the 1700s.

“But we have an oral history of British sailors meeting our people and asking for directions. We drew them a map on birch bark. If this is the first time we had ever been on the land, how could we draw a map?” said Joe.

“It’s convenient for government, for everyone, to ignore people who had no written history”

The community is excited to keep working with Carr on further testing, said Joe, to further strengthen the evidence of shared ancestry.

“This is a big thing for us,” he said. “But it all comes from something we already knew.”

(For the source of this, and many other equally intriguing articles, please visit: https://www.theguardian.com/world/2020/may/10/dna-canada-first-nations-ancestral-story/)