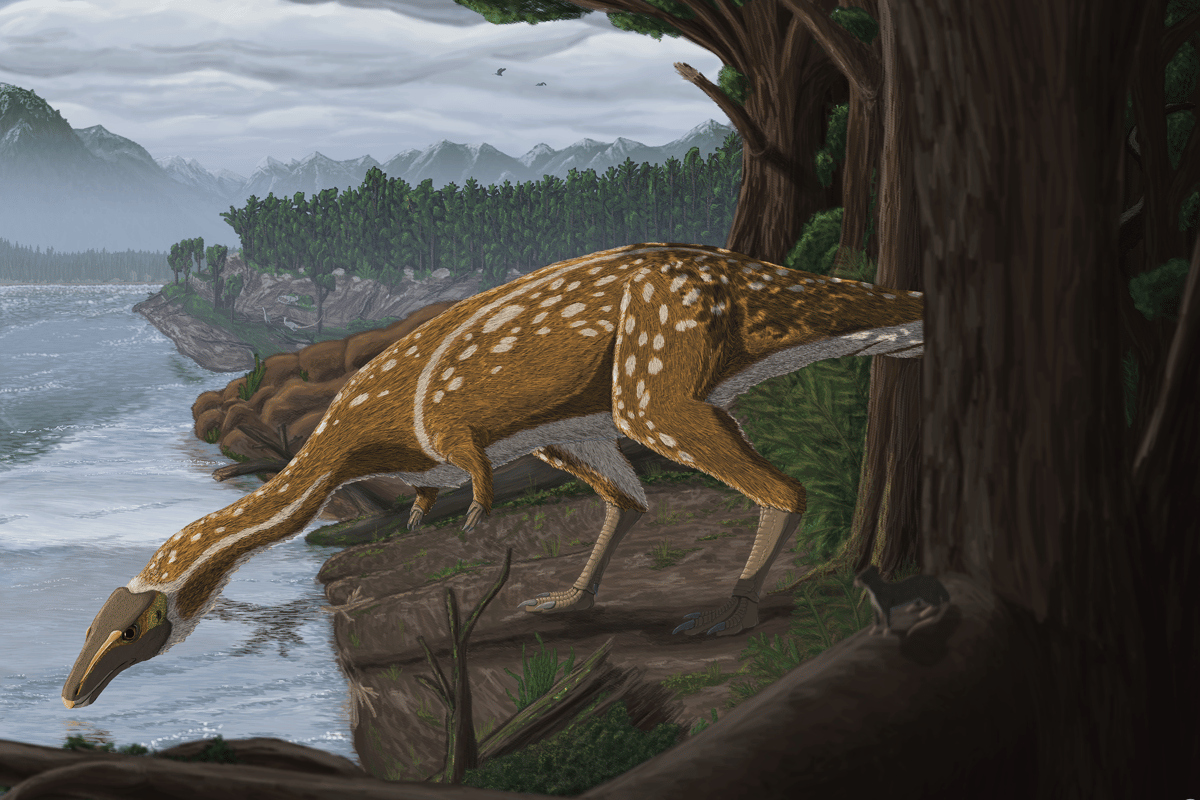 An artist’s impression of the new elaphrosaur, discovered in Victoria, Australia.  Ruairidh Duncan.
–

Paleontologists in Australia have uncovered a strange new species of dinosaur. This new creature is an elaphrosaur, placing it in the theropod family along with the Tyrannosaurus rex and Velociraptor – but this one had a long neck, no teeth and an unusual diet.

The new species itself doesn’t have an official name yet, but the specimen has been dubbed “Eric the Elaphrosaur,” after the dig site where it was uncovered: Eric the Red West, near Cape Otway in Victoria, Australia.

As a theropod, the new dinosaur had the familiar body shape of many ancient predators. It stood on two legs, had two stumpy little arms, and may have sported feathers. This one was relatively small though, measuring only about 2 m long (6.6 ft) from snout to tail.

The researchers say that they aren’t sure if that is true of the new species or not, because they haven’t found a skull yet. In fact, so far Eric is only known from a single neck bone, discovered in 2015.

The vertebra, only 5 cm (2 in) long, was originally believed to have belonged to a pterosaur, the flying reptiles that soared above the heads of the dinosaurs. But when paleontologists attempted to identify which species it was from, they realized it didn’t fit the bill.

“Pterosaur neck vertebrae are very distinctive,” says Adele Pentland, an author of the study. “In all known pterosaurs, the body of the vertebra has a socket at the head end, and a ball or condyle at the body end. This vertebra had sockets at both ends, so it could not have been from a pterosaur.”

On closer inspection, the researchers determined that it belonged to a theropod, and specifically seemed to be a match to an elaphrosaur. This would be the first such animal ever discovered in Australia, and it was also much younger than most of its kind. Others discovered in Tanzania and China date back to the Jurassic period, 160 to 145 million years ago, Eric is a spring chicken of just 110 million years.

The paleontologists hope that more bones could be uncovered during future digs at the site.

The research was published in the journal Gondwana Research.

(For the source of this, and many other equally intriguing articles, please visit: https://newatlas.com/science/elaphrosaur-dinosaur-australia/)