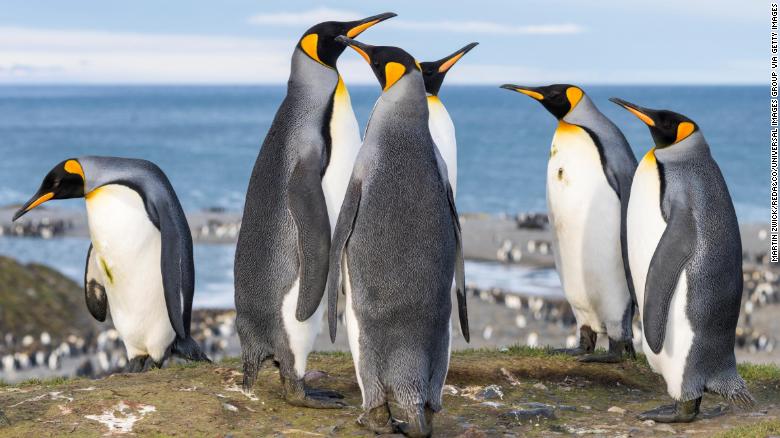 King Penguins on the island of South Georgia in St Andrews Bay.

Laughing gas isn’t just something they give you at the dentist. It also comes out of penguin poop.

How do we know this, you’re surely wondering? Well, a new study says just that.
–
Published in the journal “Science of the Total Environment,” the study examined the effects of a King Penguin colony’s activity on soil greenhouse gas fluxes in South Georgia — a sub-Antarctic island just north of Antarctica. One finding in particular was notably unique — penguin poop, also known as “guano,” produces extremely high levels of nitrous oxide.
–
It’s the chemical known to most as laughing gas.
–
“It is truly intense,” said Bo Elberling, an author of the study. He noted it’s not an insignificant amount, either — the emissions measure about 100 times more than a recently fertilized Danish field. There was enough emitted nitrous, in fact, that one researcher went “completely cuckoo,” while “nosing about in guano for several hours,” Elberling said.
“The small nitrous oxide cylinders that you see lying in and floating around Copenhagen are no match for this heavy dose, which results from a combination of nitrous oxide with hydrogen sulphide and other gases,” he added, referring to the containers designed for whipped cream but often used as a recreational drug.

How the nitrous oxide is produced

When these penguins poop, fueled by a diet of fish, squid and krill, nitrogen is released from their feces into the ground. The bacteria in the soil then converts the nitrogen into nitrous oxide — a greenhouse gas commonly known as laughing gas.
–
“It is clear to us that the level of nitrous oxide is very high in places where there are penguins — and thereby guano — and vice versa, lower in places where there is none,” Elberling said in a statement.
–
There are some climate concerns, too.
–
On their own, these droppings and their emissions aren’t enough to impact Earth’s overall energy budget, Elberling said. But the research does show how penguins influence their environments, which is especially significant as the colonies grow.
–
“A future expansion of penguins into newly available ice-free polar coastal areas may therefore markedly increase the local (greenhouse gas) budget,” the study says. Further research may also develop a deeper understanding of how the droppings affect the Earth and its atmosphere, which could help the fight against greenhouse gases, Elberling said.
–
(For the source of this, and many other equally interesting and intriguing articles, please visit: https://www.cnn.com/2020/05/19/world/king-penguins-laughing-gas-scn-trnd/index.html)
Tweet