Scientists almost missed the fossils at Cerrejón – until an undergraduate noticed a surprising number of sandstone impressions of fossil leaves. His discovery led to an expedition that found multiple new species, including the largest snake in history.

The nearly 50-foot prehistoric snake called Titanoboa hunted crocodiles and giant turtles in the swamp. It was as long as a school bus and weighed 2,500 pounds. And Titanoboa wasn’t the only surprise hiding in the Colombian coal mine. Scientists found other enormous prehistoric animals, like a 16-foot crocodile they named after a character from The Lord of the Rings.

Cerrejón, the coal mine that contains a treasure trove of fossils, gave paleontologists a glimpse into a world long forgotten – and almost lost, if not for a curious student and some helpful miners.

In the early 2000s, geology major Fabiany Herrera visited Cerrejón as part of a field trip. Herrera was an undergraduate at the Industrial University of Santander in Colombia. He made a startling discovery by merely picking up a piece of rock at the coal mine. Herrera found impressions from prehistoric leaves on every single rock he examined.

Herrera took the rocks to Carlos Jaramillo, a scientist working for Colombia’s oil company. The discovery excited Jaramillo so much that he called up the Smithsonian and invited a paleobiologist to visit the coal mine. Along with Herrera, the team undertook the first fossil hunt in Cerrejón in 2003.

The Fossils Almost Weren’t Discovered At All

The coal company that mined Cerrejón knew there were fossils in their pits. In 1990, a geologist named Henry García picked a fossil up from the ground and put it on display back at the office. García wasn’t sure of the fossil’s identity, so he called it “Petrified Branch.”

In 2003, paleobiologist Scott Wing took a picture of the “Petrified Branch” and sent it to a paleontologist friend named Johnathan Bloch. “I flipped out,” Bloch recalled. He knew it wasn’t a petrified branch at all, but the fossilized jawbone of an animal. It was the first fossil from a land vertebrate found in tropical South America.

Bloch immediately flew to Colombia to look at the fossil, but no one could find the key to the display case. Instead, the eager scientists broke the glass and confirmed the major find.

Scientists discovered fossils from the largest snake in history at Cerrejón. Named Titanoboa, the snake species grew up to 49 feet long and weighed more than two tons, and it dominated the tropical swamp. Scientists say the Titanoboa looked like a cross between a boa constrictor and an anaconda, but much larger.

Titanoboa hunted enormous turtles and crocodiles, making it an apex predator. And scientists didn’t just find one snake at the Colombian coal mine. By 2009, the digs had uncovered nearly 30 snakes, all of which measured at least 42 feet long. According to paleontologist Carlos Jaramillo, “What we have is a population of big snakes. It’s not one snake. It’s a bunch of them.”

Titanoboa was hiding in plain sight at the coal mine. When paleontologists began collecting fossils in 2003-2004, they were overwhelmed by the number of items. A large group was mislabeled as prehistoric crocodile vertebrae because of their size.

It wasn’t until 2007 that scientists realized they belonged to a snake. Johnathan Bloch explains:

My only excuse for not recognizing them is that I’ve picked up snake vertebrae before. And I said, “These can’t be snake vertebrae.” It’s like somebody handed me a mouse skull the size of a rhinoceros and told me “That’s a mouse.” It’s just not possible.

The Prehistoric Snake Was As Long As A School Bus

Titanoboa wasn’t just the largest snake in history – it ranks as one of the largest animals ever. The snake grew up to 49 feet, making it as long as a school bus. Titanoboa weighed as much as 2,500 pounds or the size of a small rhino.

The sheer size of Titanoboa provided valuable information for scientists. As a cold-blooded reptile, Titanoboa must have lived in a very warm climate to support its size. Researchers estimated that the average temperature in Titanoboa’s habitat might have exceeded 90 degrees, providing helpful evidence about prehistoric climates.

The Hot, Swampy Land Was Perfect For A 50-Foot Snake

While Cerrejón is rich in coal today, the environment was completely different 58 million years ago. The land was covered in a swampy jungle that received nearly twice as much rain as the Amazon rainforest today; it now receives about 80 inches per year. The temperature was also higher, with averages close to 90 degrees.

In the swamp, palm trees grew from muddy floodplains, surrounded by cloudy rivers. The swampy environment became the perfect habitat for a 50-foot long snake – and it also created the coal mines that began attracting attention in the 20th century.

It may be an active coal mine, but Cerrejón is also one of the most important places in the world for fossil deposits. Paleontologist Carlos Jaramillo says, “Cerrejón is the best, and probably the only, window on a complete ancient tropical ecosystem anywhere in the world.”

The coal mine stands out because it captures the world of 60 million years ago better than any other location. “The plants, the animals, everything. We have it all, and you can’t find it anywhere else in the tropics,” Jaramillo explained to Smithsonian magazine.

The coal mine also contained multiple species of prehistoric crocodiles, including massive creatures like Anthracosuchus balrogus. The ancient crocodile weighed up to 900 pounds and reached a length of 16 feet. It takes its name from the Balrog, a fictional creature from J.R.R. Tolkien’s The Lord of The Rings that lives deep underground.

Paleontologist Johnathan Bloch explained, “Much like that giant beast, Anthracosuchus balrogus was [awakened] from deep within a mine after 60 million years trapped within the rocks of tropical South America.”

The Crocodile Discoveries Explain How The Creatures Survived Mass Extinctions

Scientists uncovered multiple new species of prehistoric crocodiles at Cerrejón. The find explains how some animals survived extinctions. During the decline of the dinosaurs 65 million years ago, some crocodiles survived. For example, A. balrogus swam across the Atlantic from Africa to South America, where it adapted to a new freshwater environment.

Scholar Alex Hastings explains, “This group offers clues as to how animals survive extinctions and other catastrophes.” They also demonstrate the changes to crocodiles over the past 60 million years. According to Hastings, “Everyone thinks that crocodiles are living fossils that have remained virtually unchanged for the last 250 million years. But what we’re finding in the fossil record tells a very different story.”

Gigantic Turtle Shells From The Coal Mine Revealed New Species

Scientists believe the unique, circular shell gave the turtle an advantage. The flat, round shell let the prehistoric turtles swim with little water resistance, and on land, the shell helped soak up heat to keep the turtle moving.

The shell may have also protected the turtle from predators, like Titanoboa. The massive snake likely couldn’t fit the turtle’s wide, flat shell into its mouth.

The Swamp Was Home To Even More Species Of Massive Turtles

The exposed coal mines in Cerrejón revealed a field of enormous turtle shells. The undergraduate who first discovered fossils at the site, Fabiany Herrera, said, “It was covered with turtle shells.” Some of the shells were more than five feet wide, and the turtles weighed in at 300 pounds.

The massive turtles were hunted by prehistoric crocodiles. One species of crocodile found at Cerrejón had jaws large enough that it could bite one-and-a-half feet into the turtles’ shells. The turtles also sometimes fell prey to Titanoboa, the largest snake in history. 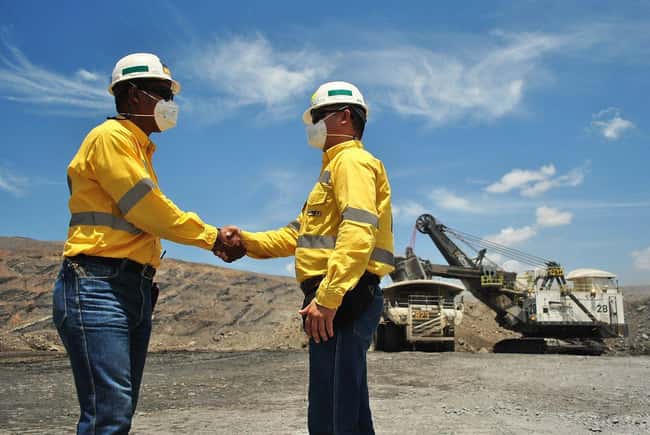 Coal miners at Cerrejón pull over 30 million tons of coal from the earth each year, and their work helps the scientists uncover new fossils. Some of the pits at Cerrejón plunge 300 feet into the earth, revealing the world of 60 million years ago. The miner’s tools make it easier for scientists to make critical discoveries.As paleontologist Carlos Jaramillo explained, “They close a pit, and then they open up a new pit, so we always have possibilities.” He added, “We always find new things.”

The ridge that makes up Cerrejón’s coal deposit is around 60 million years old. At that time, Colombia was a tropical rainforest filled with giant snakes, crocodiles, and turtles. But the ecosystem thrived after the event that wiped out the dinosaurs.

In fact, the coal mine sheds light on the meteorite that struck the Yucatán Peninsula. The strike created an environmental crisis. The clues from Cerrejón show how creatures like Titanoboa thrived in the changed environment, while other animals, like the prehistoric crocodiles who survived, had to adapt to changes.

The Coal Mine Is One Of The Largest In The World

Cerrejón is more than a fossil treasure trove. It’s also one of the largest coal mines in the world. The pits at Cerrejón stretch 15 miles, making it larger than Washington, DC. Around 10,000 employees work at the coal mine, and the mine produces an output of more than 30 million tons of coal per year.

And Cerrejón’s mining helped uncover the rich fossil discoveries that make it a paradise for scientists.

(For the source of this, and may other equally interesting articles, please visit: https://www.ranker.com/list/columbian-mine-fossil-discoveries/genevieve-carlton/)