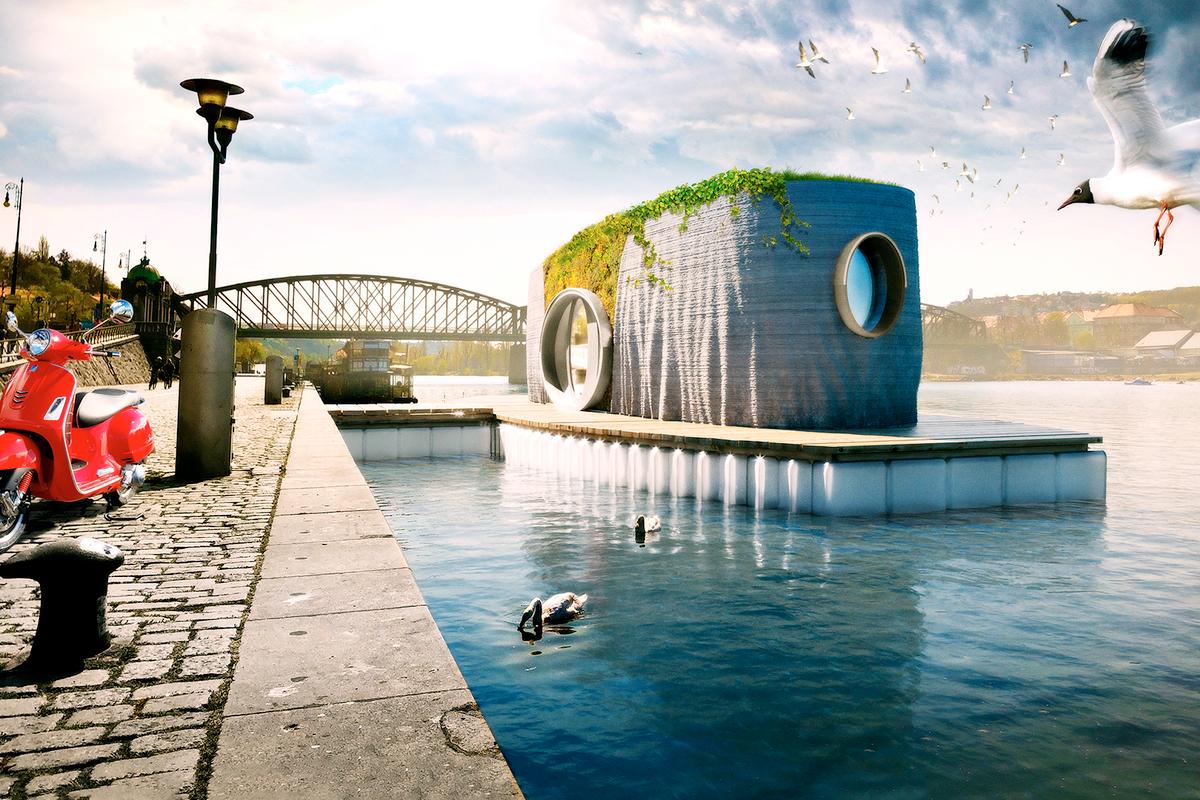 Prvok, a 3D-printed small home on a pontoon, will be the Czech Republic’s first piece of printed architecture.  Prvok od Burinky.
–

The Czech Republic’s first 3D-printed house will go up next month, to demonstrate the speed and effectiveness of a construction technique that is claimed to be seven times faster and half the cost of building a brick house.

With three rooms and a floor area of 43 square meters (463 sq ft), the Prvok od Burinky home will be built layer-by-layer using a robot arm repurposed from the automotive industry. This arm will deposit a specially formulated concrete, with nano-polypropylene fibers, plasticizers and setting accelerators mixed in, at a rate of 15 cm (5.9 in) per second. Walls will be printed with inner and outer layers, and the middle will presumably be filled with insulating material.

Within 24 hours, this concrete will set to standard house foundation hardness, and after 28 days the company says it will complete its hardening to the point where it’s as strong as a bridge. The structure and materials are designed to hold up for 100 years.

This demonstration home will be built on a floating pontoon, with a wooden deck around it. Moving inside, it’s a fairly small living space for two, with a bedroom, living room/kitchen and a bathroom.

Its asymmetric, layered walls give a glimpse of what a future 3D-printed home aesthetic might look like: freeform, without the necessity for right angles or straight lines. Almost like a cave in a 16-bit video game. One wonders how hard it’ll be to keep the walls clean. But it’s certainly stylish, in a minimalist way, and the warm lighting in the bedroom and cool blue of the bathroom throw some tasteful moods into the promo renders.

It’ll be equipped with the requisite eco-tech: recirculating shower, green roof, and reservoirs for drinking, utility and sewage water. Adding to its green credentials is the claim that this kind of structure will create up to 20 percent less CO2 than an equivalent brick building, and “several times less construction and demolition waste.”

3D-printed housing has been threatening to take off for several years now, but it’s still at an embryonic stage. Aside from how quickly it allows structures to be built, it should ultimately also be super-flexible in terms of custom floorplans and exterior designs, as long as you don’t mind the layered look. We look forward to seeing this thing in the flesh next month. Check out a video introducing the architect, Michal Trpak, below.

(For the source of this, and many other equally interesting articles, please visit: https://newatlas.com/architecture/czech-3d-printed-house/)