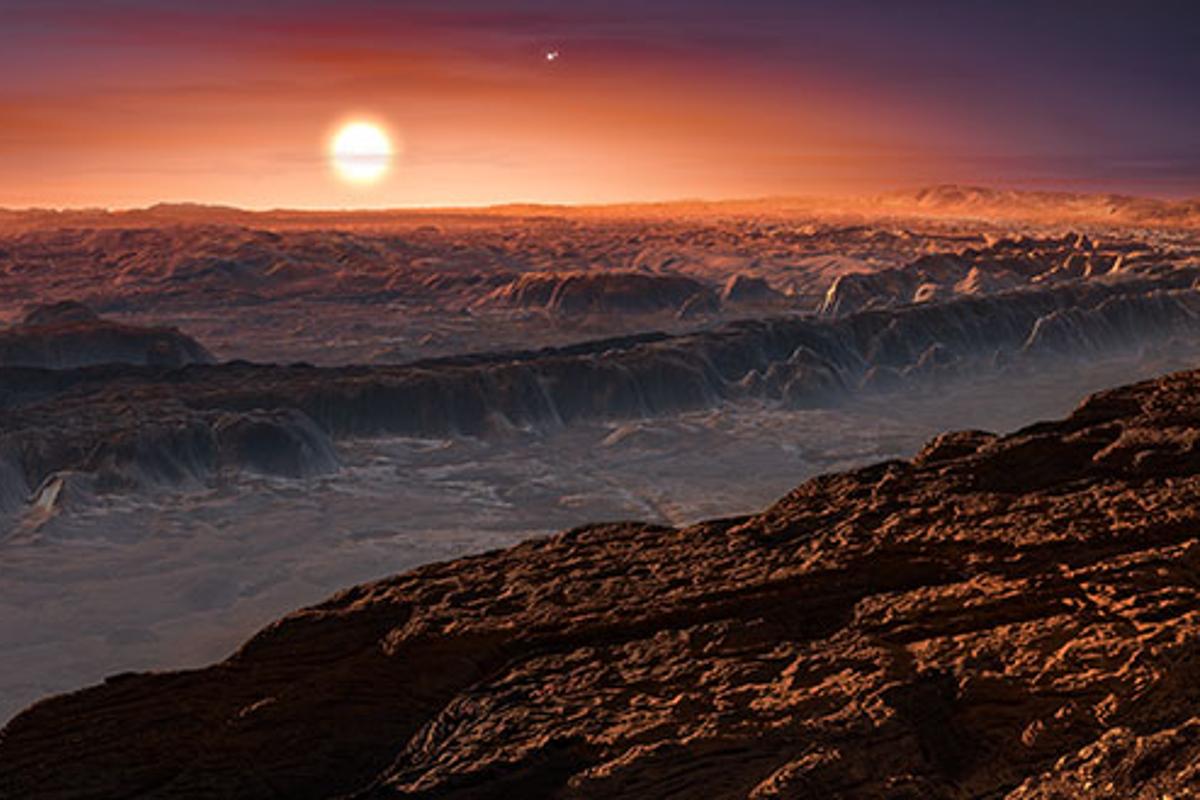 Artist’s impression showing a view of the surface of the planet Proxima b orbiting the red dwarf star Proxima Centauri, the closest star to our solar system.  ESO/M. Kornmesser.

–
A team of international researchers has confirmed the existence of an Earth-like exoplanet only 4.2 light-years from the Sun. Using the Echelle SPectrograph for Rocky Exoplanets and Stable Spectroscopic Observations (ESPRESSO), the scientists found that the exoplanet Proxima b has a mass of 1.17 Earth masses and sits in the habitable zone of Proxima Centauri, which it orbits every 11.2 days.

First suspected to exist in 2013 and confirmed in 2016 by the European Southern Observatory’s (ESO’s) High Accuracy Radial Velocity Planet Searcher (HARPS) spectrograph, Proxima b is not only the closest exoplanet to us, but also looks more Earth-like as more accurate measurements come in.

According to the research team, led by Alejandro Suárez Mascareño of the Instituto de Astrofísica de Canarias (IAC), the new measurements of Proxima b came from the Swiss-manufactured ESPRESSO, which is a more advanced version of HARPS that is three times more accurate. By measuring the changes in the radial velocity of Proxima Centauri with an accuracy of 30 cm/s, the instrument showed that the mass of the exoplanet is 1.17 times that of the Earth, rather than the previous estimate of 1.3 Earths.

“Is there an atmosphere that protects the planet from these deadly rays?” says Christophe Lovis, a researcher in UNIGE’s (University of Geneva) Astronomy Department. “And if this atmosphere exists, does it contain the chemical elements that promote the development of life – oxygen, for example? How long have these favorable conditions existed? We’re going to tackle all these questions, especially with the help of future instruments like the RISTRETTO spectrometer, which we’re going to build specially to detect the light emitted by Proxima b, and HIRES, which will be installed on the future ELT 39 m giant telescope that the European Southern Observatory is building in Chile.”

The research was published in Astronomy & Astrophysics.

(For the source of this, and many other equally intriguing articles, please visit: https://newatlas.com/space/proxima-b-more-earthlike-previously-thought/)