The Transylvanian-born orphan was sold to an English traveller, with whom she discovered the wonders of Africa, married and fought to abolish slavery. 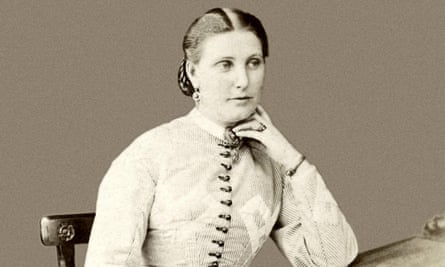 Lady Florence Baker, pictured in London in about 1870. Photograph: Henry Maull/Alamy
–
By Marcel Theroux
2020 May 31

Claim to fame
The details of Florence Baker’s early life are sketchy – for dramatic reasons. As an orphan she was sold into the Ottoman slave trade, and in 1859 found herself on the auction block in Vidin, in present-day Bulgaria. Blonde, blue-eyed and polylingual, she caught the eye of English traveller Samuel Baker, who bought her.

Baker, a middle-aged widower, took her with him as he headed to Africa to search for the source of the Nile. Along the way, Florence learned Arabic, brokered peace when their team of locals mutinied, and nearly died of sunstroke. They didn’t find the source of the Nile, but she and Samuel were the first Europeans to see Murchison Falls and Lake Albert in Uganda. When Samuel went back to England in 1865 to be knighted, she went with him as his wife. Explorer David Livingstone wrote snarkily: “Baker married his mistress at Cairo and by all accounts she deserved it after going through all she did for him.” It’s said that a scandalized Queen Victoria refused to receive them at court. Between 1870 and 1873, the Bakers made another expedition to east Africa to try to suppress the slave trade – presumably a cause Florence felt strongly about.

Supporting documentation
Florence kept diaries of her travels in English, but has been overshadowed by her husband and still lacks a definitive biography. In the writings of others – Samuel especially – she emerges as a person of enormous resourcefulness and sangfroid, whether serving afternoon tea to guests in the jungle or preparing a last-ditch defense against the king of Bunyoro’s army.

Distinguishing marks
It may just be the long exposure times of 19th-century photography, but pictures of Florence portray an icy calm and imperturbability.

Last sighted
Widowed in 1893, Florence lived until 1916 at Sandford Orleigh, the Bakers’ estate in Devon, and was doubtless gratified when the Daily News called her “a refined English lady”.

Intrepidness rating
Florence, like Daenerys Targaryen in Game of Thrones, was blessed with resilience that seems to require supernatural explanation: 10.

… in the coming months, and the results will define the country for a generation. These are perilous times. Over the last three years, much of what the Guardian holds dear has been threatened – democracy, civility, truth.

Science and reason are in a battle with conjecture and instinct to determine public policy in this time of a pandemic. Partisanship and economic interests are playing their part, too. Meanwhile, misinformation and falsehoods are routine. At a time like this, an independent news organization that fights for data over dogma, and fact over fake, is not just optional. It is essential.

The Guardian has been significantly impacted by the pandemic. Like many other news organizations, we are facing an unprecedented collapse in advertising revenues. We rely to an ever greater extent on our readers, both for the moral force to continue doing journalism at a time like this and for the financial strength to facilitate that reporting.

We believe every one of us deserves equal access to fact-based news and analysis. We’ve decided to keep Guardian journalism free for all readers, regardless of where they live or what they can afford to pay. This is made possible thanks to the support we receive from readers across America in all 50 states.

As our business model comes under even greater pressure, we’d love your help so that we can carry on our essential work. Support the Guardian from as little as $1 – it only takes a minute. Thank you.

(For the source of this, and many other equally intriguing articles, please visit: https://www.theguardian.com/travel/2020/may/31/florence-baker-polyglot-slave-girl-turned-explorer/)