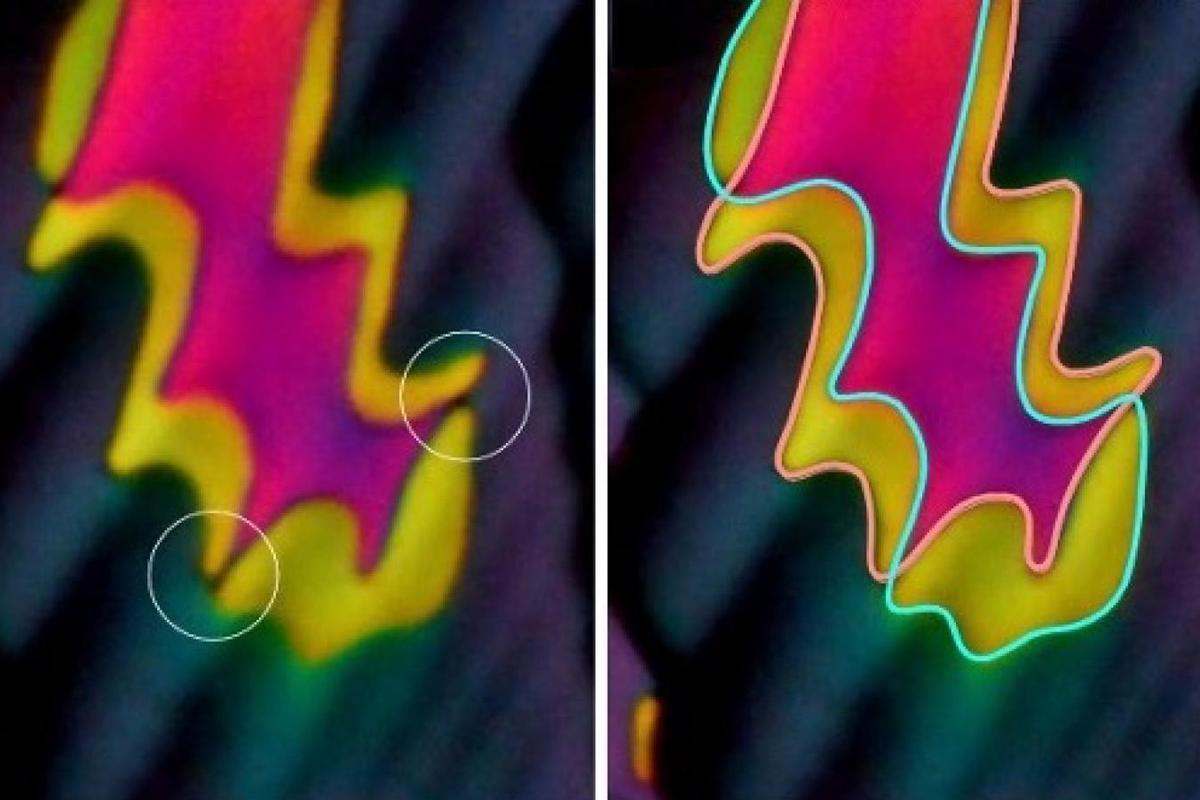 Striking colors seen in a newly discovered phase of liquid crystal under the microscope.  SMRC
–
By Nick Lavars, 2020 Jun 10
–
More than 100 years after a pair of imaginative physicists first proposed a new phase of liquid crystal, scientists at the University of Colorado Boulder have managed to produce it and have been left “stunned” by its behavior. This new “ferroelectric nematic” phase has proven highly responsive to electrical fields, and by improving the understanding of its unique behavior, the team is hopeful it could lead to an entirely “new universe” of materials.

The origins of the discovery can be traced back to the early 20th century, when Nobel Laureates Peter Debye and Max Born started to ponder a new type of liquid crystal, one featuring a neat arrangement of molecules aligned in the same direction rather than randomly pointing left or right.

Researchers soon discovered solid crystals that exhibited this behavior, with the molecules aligned in uniform directions and able to be flipped when subjected to an electric field. These “ferroelectric” solid crystals marked a significant advance in materials, but a liquid crystal phase bearing the same characteristics has remained elusive, until now.

The newly discovered phase is a form of nematic liquid crystal, which offer a mix of fluid- and solid-like characteristics that allow for some unique abilities, namely an ability to control light. This has seen them form the basis of LCD screens and help usher in the era of portable computing.

The scientists at University of Colorado Boulder’s Soft Materials Research Center were experimenting with an organic molecule called RM734, which had been shown to exhibit a conventional nematic liquid crystal phase at high temperatures and another unusual phase at lower temperatures.

When playing around with this molecule under the microscope, the team noticed that when subjected to a weak electric field, a mix of striking colors began to appear at the fringes of the cell containing the liquid crystal. Further investigations revealed that this phase of RM734 was between 100 to 1,000 times more responsive to electric fields than your typical nematic liquid crystals, and that patches of aligned molecules formed spontaneously when it was cooled from higher temperatures.

“That confirmed that this phase was, indeed, a ferroelectric nematic fluid,” says Noel Clark, a professor of physics and leader of the research team.

Closer inspection of these molecules left the scientists “stunned” at how neatly they were aligned, with almost all pointing in the same direction. Co-author Matt Glaser says the ferroelectric nematic phase of liquid crystal “opens a door to a new universe of materials,” which could find their way into new types of display screens or computer components.

“There are 40,000 research papers on nematics, and in almost any one of them you see interesting new possibilities if the nematic had been ferroelectric,” Clark says.

From here, the team is continuing to study RM734 through computer simulations to better understand how it forms this new phase.

–
(For the source of this, and many other equally intriguing articles, please visit: https://newatlas.com/materials/ferroelectric-nematic-phase-liquid-crystal/)