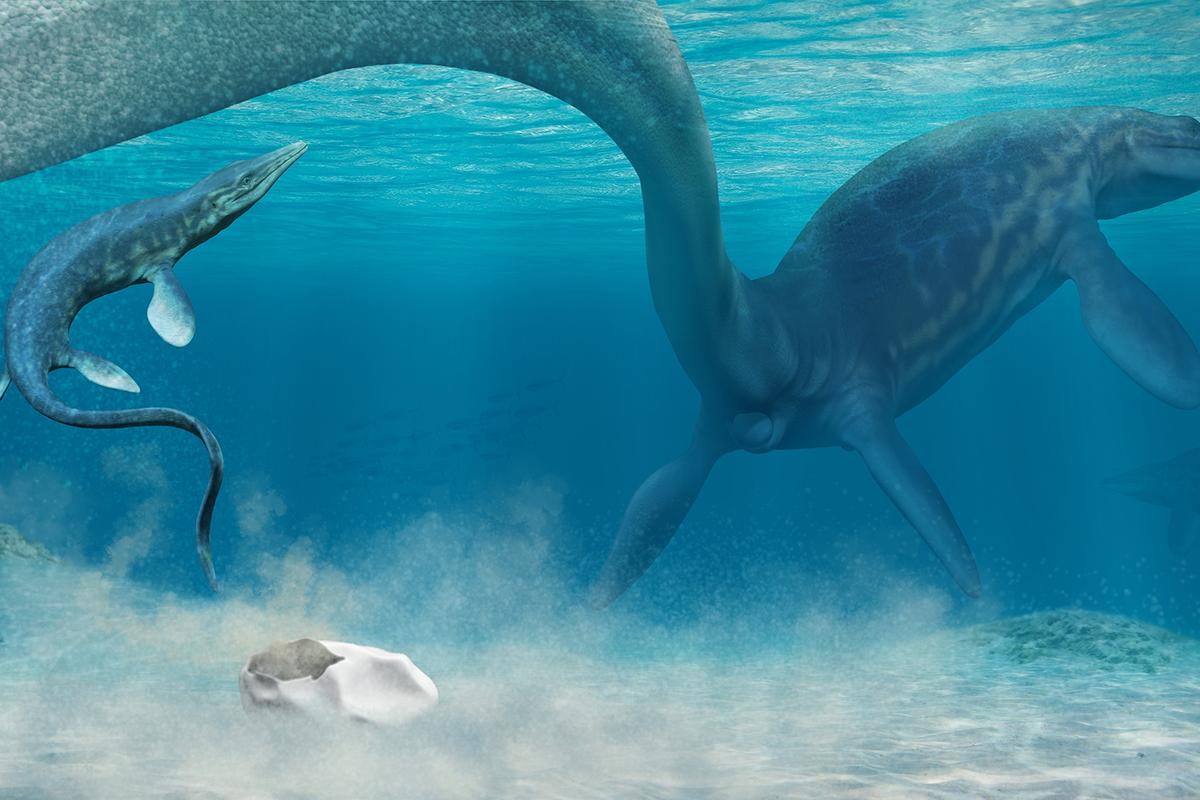 An artist’s impression of a mosasaur laying a soft-shelled egg, with a hatchling born soon after – Francisco Hueichaleo, 2020

A strange fossil discovered in Antarctica almost a decade ago has finally been identified. Researchers at the University of Texas at Austin have determined that the object is a giant, soft-shell egg, most likely laid by an ancient marine reptile.

Ever since its discovery in 2011, this weird fossil has been sitting unexamined in the back rooms of Chile’s National Museum of Natural History. It looks like a squashed football, measuring over 11 in (27.9 cm) long and 7 in (17.8 cm) wide.

But now, the UT Austin team has finally given the thing a look over, and found that it’s most likely the remains of a soft-shelled egg, after the hatchling had broken free. The layers of membranes seen under the microscope were a dead giveaway.

But it’s not just any egg – this is the second-largest egg of any known animal, alive or dead, and the largest soft-shelled one ever seen. It dates back to about 66 million years ago – just before the dinosaurs became extinct.

“It is from an animal the size of a large dinosaur, but it is completely unlike a dinosaur egg,” says Lucas Legendre, lead author of the study. “It is most similar to the eggs of lizards and snakes, but it is from a truly giant relative of these animals.”

The most likely culprit, according to the researchers, is an extinct marine reptile called a mosasaur. You might remember it as the gigantic aquatic beast putting on a whale of a show in the movie Jurassic World.

The researchers came to this conclusion after comparing the relative body and egg sizes of 259 living reptiles. Judging by the size of this egg, the researchers calculated that the reptile that laid it must have been more than 23 ft (7 m) long – not including a tail.

A mosasaur fits the bill, both due to its size and its relation to living creatures that lay similar types of eggs. That’s backed up by the discovery of fossilized bones from baby and adult mosasaurs and plesiosaurs, found in the same Antarctic rock formation as the egg.

“Many authors have hypothesized that this was sort of a nursery site with shallow protected water, a cove environment where the young ones would have had a quiet setting to grow up,” says Legendre.

But there’s a problem: conventional thinking says that mosasaurs – and most other ancient, giant marine reptiles – gave birth to live young. More evidence will be required to figure out whether this egg really does show otherwise.

Source: University of Texas at Austin

Michael Irving
Michael has always been fascinated by space, technology, dinosaurs, and the weirder mysteries of the universe. With a Bachelor of Arts in Professional Writing and several years experience under his belt, he joined New Atlas as a staff writer in 2016.
–
Sign in to post a comment.
Please keep comments to less than 150 words. No abusive material or spam will be published.
–
–
(For the source of this, and many other equally intriguing articles, please visit: https://newatlas.com/science/giant-ancient-egg-antarctica-mosasaur/)
Tweet