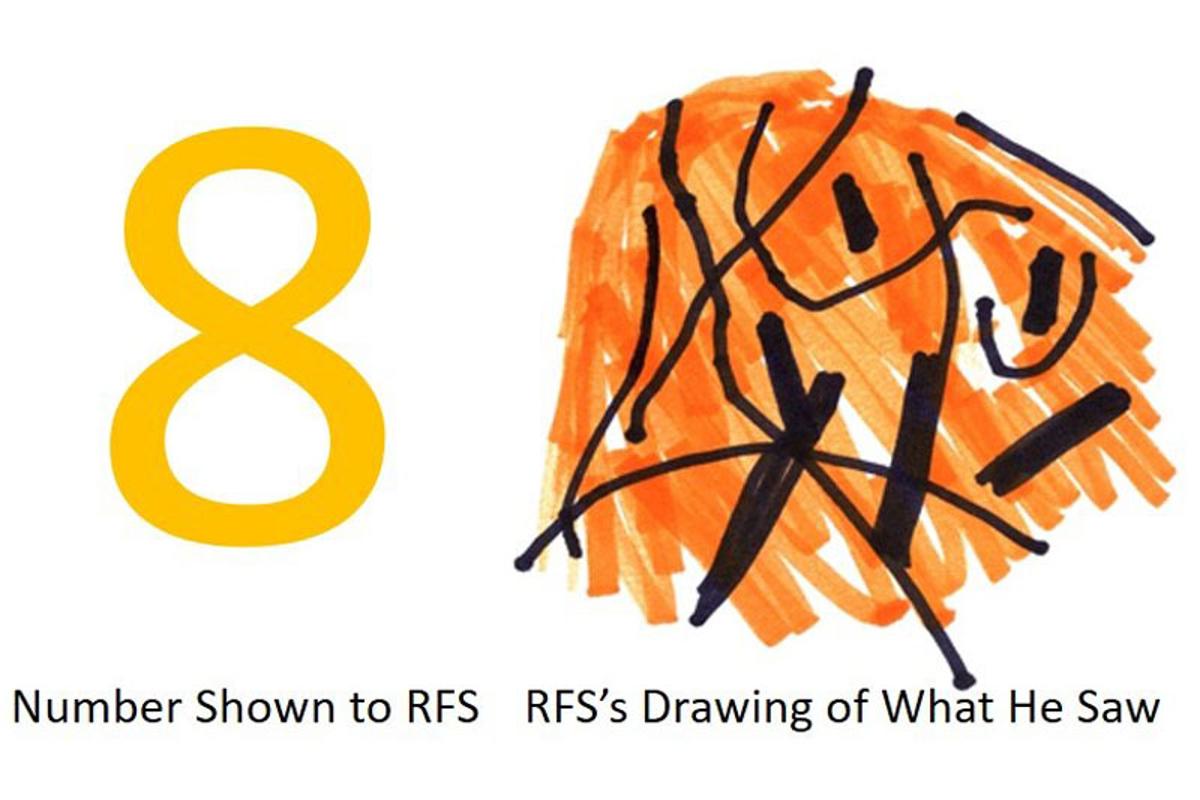 Looking at any digit between 2 and 9, patient RFS could only see a spaghetti-like scramble of lines and colors, as depicted here.  Johns Hopkins University
–
Damaged brains have given us an incredible treasure trove of information to help us untangle the mysteries of the human mind. A tiny brain lesion can shift a person’s reality in bizarre and tragic ways, as anyone who’s read The Man Who Mistook His Wife for a Hat can attest, and their ability to fully describe their condition can lead us toward a fuller understanding of how our incredibly complex mental processes work. Here’s another oddity to put on the pile.

Johns Hopkins researchers have described a patient they have called RFS, whose rare degenerative brain disease has caused “extensive atrophy in the cortex and basal ganglia.” RFS suffered the typical muscle spasms and memory issues you’d expect in such a patient, but also started experiencing some very strange issues with numbers.

While RFS had no trouble reading or identifying letters of the alphabet, and 1 and 0 would appear normally, the digits between 2 and 9 would turn into “spaghetti” when he looked at them, and he’d have no idea what number he was looking at. Trying to draw what he was seeing produced abstract collections of lines, dots and splashes of color.

To make things even stranger, placing a number on top of a picture of a familiar object like a violin would scramble the whole thing, so he couldn’t identify the violin or the number. Gradually moving the violin image away from the number, there was a point at which the violin popped back into his perception.

The Johns Hopkins team, led by former grad students Teresa Schubert and David Rothlein, did some experiments using electroencephalography (EEG) to monitor RFS’s brain activity during various tasks. When shown a face with a number on it, RFS was completely unaware there was a face or a number in what he was seeing, and yet his EEG activity indicated that his brain was responding just as if he was looking normally at a face.

“These results show that RFS’s brain is performing complex processing in the absence of awareness,” Rothlein says. “His brain detected the faces in the digits without his having any awareness of them.”

Similarly, when shown words with digits embedded in them, RFS saw nothing but a scrambled mess – and yet the EEG showed his brain was getting the full picture.

“He was completely unaware that a word was there, yet his brain was not only detecting the presence of a word, but identifying which particular word it was, such as ‘tuba’,” Schubert says.

So what can we learn from this wonderfully weird condition? The team says it points to a separation of perception and awareness. The brain can identify faces, words, and pictures, but there’s some additional level of neural processing required to bring them to our awareness. This, the team hypothesizes, is where the damage lies in RFS’s brain tissue.

The research is available in PNAS.

Loz Blain
Loz has been one of our most versatile contributors since 2007. Joining the team as a motorcycle specialist, he has since covered everything from medical technology to aeronautics, music gear and historical artefacts. Since 2010 he’s branched out into photography, video and audio production.
–
–
(For the source of this, and many other equally curious articles, please visit: https://newatlas.com/medical/man-cant-see-numbers-brain-science/)