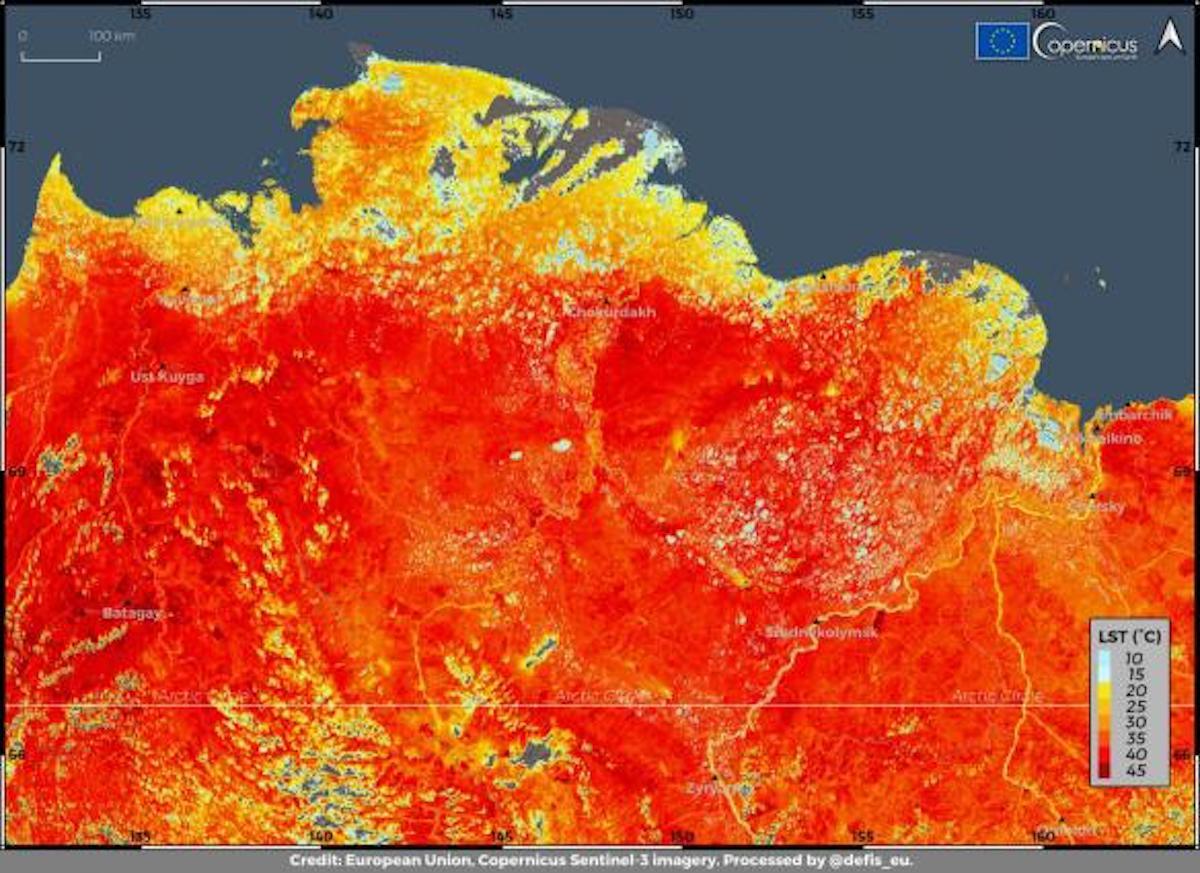 Scientists at a weather station in Siberia have logged an extreme temperature for the region of 38 °C (100.4 °F).  European Union/Copernicus Sentinel 3 imagery

Scientists at a weather station in Siberia have logged an extreme temperature for the region of 38 °C (100.4 °F)

With sea ice coverage that continues to sink to record lows and temperatures that continue to hit record highs, the Arctic is one part of the world that is already feeling the brunt of global warming. New observations from a weather station in Siberia do nothing to buck this trend, with scientists logging an extreme temperature of 38 °C (100.4 °F), thought to be a new record for the region north of the Arctic circle.

The temperature was logged on June 20 by scientists at a meteorological station in the Russian town of Verkhoyansk, and usurps the previous highest temperature recorded at the facility of 37.3 °C (99.14 °F) in 1988. The station has recorded daily weather readings since 1885.

The reading comes in the midst of a heatwave in Siberia, along with a heightened wildfire season and a warming trend across the globe. Verkhoyansk in Eastern Siberia is also subjected to a harsh and dry continental climate with typically hot summers, but it appears these factors have combined to push the mercury to new heights.

“It has been an unusually hot spring in Siberia, and the coinciding lack of underlying snow in the region combined with overall global temperature increases, undoubtedly helped play a critical role in causing this extreme temperature observation,” says Randall Cerveny, the World Meteorological Organization’s (WMO) Special Rapporteur on Weather and Climate Extremes.

The WMO is now working to verify the reading, though this process isn’t exactly straightforward. Investigators will need to pore through the weather data collected by the Russian scientists, along with information on the equipment and techniques used and readings from surroundings stations.

“Those data will then be very carefully examined by an international panel of atmospheric scientists,” says Cerveny. “Fundamentally, these evaluations are very thorough and time-consuming projects. But the end result will be incredibly valuable information that will help climate scientists better understand climate, engineers and medical doctors better prepare for climate extremes and even the general public in achieving a better appreciation of climate change across this planet.”

Furthermore, the WMO hasn’t previously verified temperature records for the region north of the Arctic Circle, and doing so would require them to assess weather data for the whole area. Nonetheless, it has given “tentative acceptance” of the reading as a legitimate observation, and says that with the interest it is generating, it is now actively considering the creation of a new category for the Arctic Circle for its official archives.

Nick Lavars
Nick has been writing and editing at New Atlas for over six years, where he has covered everything from distant space probes to self-driving cars to oddball animal science. He previously spent time at The Conversation, Mashable and The Santiago Times, earning a Masters degree in communications from Melbourne’s RMIT University along the way.

(For the source of this, and many other equally important articles, please visit: https://newatlas.com/environment/arctic-circle-record-temperature-siberian-heatwave/)